NewsPaperthe art of publishing
HomeNewsIs Raab coming up on the rails?
90

Is Raab coming up on the rails?

Yesterday Conservative Home published their monthly survey on the next Tory leader, and it’s difficult to discern any very dramatic movement in opinion. Boris Johnson retains his first place and makes up some of the ground he lost in November 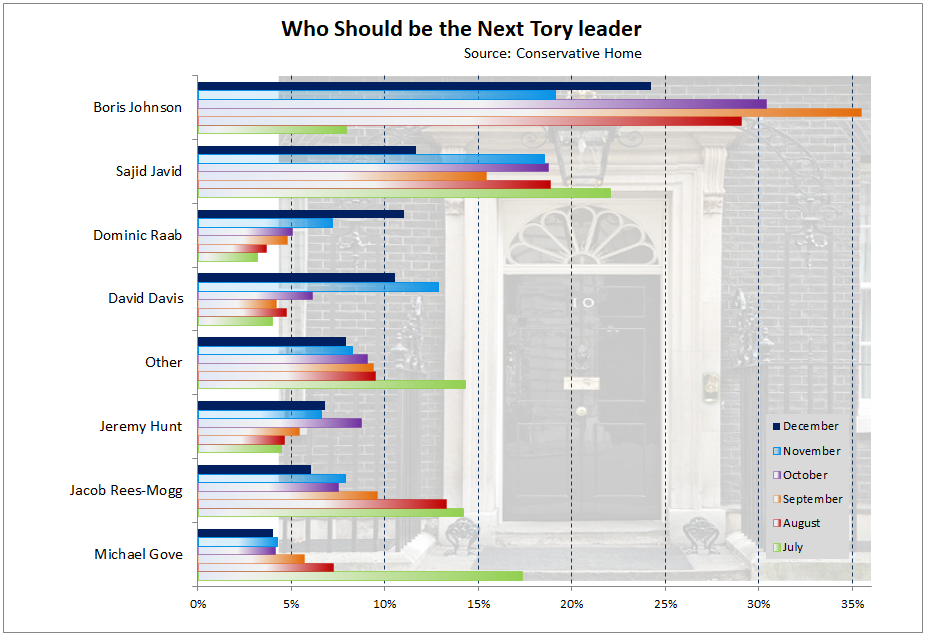 Sajid Javid continues in second place but has shed a quarter of his support while the big winner this month is Dominic Raab, who moves into third place, replacing Davis.

There is no change at the bottom of the leader board with Truss, Hammond, Lidington, Williamson and Lewis all scoring 1% or less in that order. 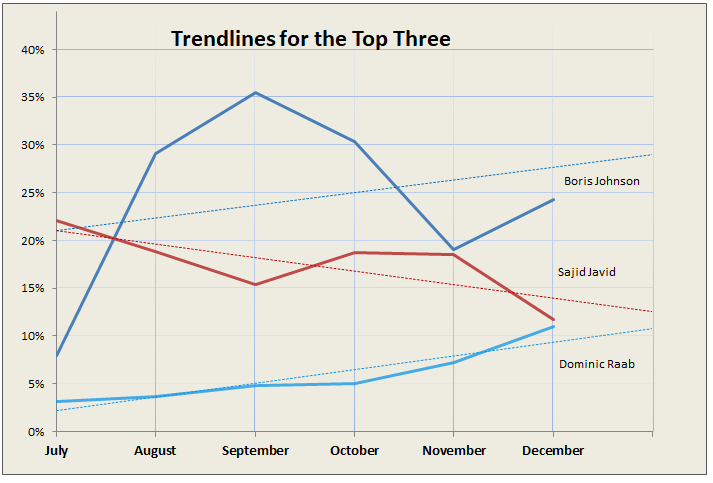 On current form, it is conceivable that Raab and Javid could swap places but while the atmosphere in the country, the party and parliament continues to be febrile, predictions are largely pointless.

Respondents might by now be so inured to the awfulness of Theresa May that the latest batch of numbers reflect a sense of lassitude. There might otherwise have been a tendency to pile in behind the most clear-cut contenders if a leadership challenge seemed imminent.

If there is one clear conclusion that is reinforced by the December survey, it is that two names are the obvious choices for the parliamentary party to put before the membership when that happy day dawns that May’s political career goes gentle into that good night.

It is clear that Johnson and Javid should be the two candidates to contest the leadership. It is also a fact that Johnson commands the greatest support among voters across party loyalties, but given the arrogance of parliamentarians and the habit of Conservative headquarters to drench their grassroots regularly with glyphosate, the obvious is not necessarily the most likely outcome.

The provisional ruling by the European Court of Justice that the Article 50 notification can be rescinded offers an opportunity which it might be wise to take seriously.

How would the public react to May and her Withdrawal Agreement being scrapped, her replacement cancelling Article 50 and beginning the Brexit process afresh in a sensible and orderly fashion?

The ECJ could be setting an unfortunate precedent, however, and might yet reach a different conclusion on this. Could Italy or some of the Visigrad countries invoke Article 50 to exert pressure on Brussels rather than because they actually intended to leave the Union?

And here’s a closing thought. Geoffrey Cox is without doubt a considerable legal expert with a towering intellect, but his response in the Commons to the DUP’s Nigel Dodds failed to convince. The Attorney General claimed that the Irish backstop would be as painful to the EU27 as it would be to the UK because NI businesses would have an advantage over their EU27 competitors who would then take the EC to the ECJ.

Now if we’ve learned one thing over the last couple of years, it’s that the EU functions on a rules-based system and the thing about rules-based systems is that they adore introducing new rules. In the case of the EU, new rules are often associated with funds set up to support them and so as sure as des oeufs is des oeufs, a competitive advantage for NI would result in the establishment by the EU of a Northern Ireland Subvention Arrangement to compensate. And what’s the betting that the UK would end up being made to fund it?