Boris has gone. From the moment he went AWOL from yesterday’s Cobra meeting and Balkan summit lunch the theorists were at it, to be proved right a few hours later.

Honourable or inevitable? My guess, I’m afraid, is Bojo jumped before he was pushed. But hats off to him for that at least. Mrs May, I fear, will be well pleased with the outcome of her Chequers Cabinet lockdown. With the remnant awkward squad out of the way (as planned?) she can go on to deliver a seamless Brexit In Name Only. Olly Robbins, her chief EU adviser, must be rubbing his hands in glee at seeing his masterplan work.

So what a tragedy that Davis and Bojo left it so late – we can only pray not too late – the former departing only after one goading humiliation after another and the latter after an outmanoeuvring by Michael Gove again. Gove’s extraordinary volte-face on the Marr programme yesterday when he appeared as Mrs May’s representative on earth was surely ominous.

What a roller-coaster it has been. Can Boris bounce back again as he managed after his disastrous post-referendum disappearance and subsequent outflanking by Gove? Can he once again, in a matter of months, rise to the top of the Tory pops?

Through his own uncertainty he wasted the significant window he had when he could have challenged May for the leadership – such was his popularity with the party and grass roots, such was May’s incompetence and such was the almost total dismay of the Tory Party with their seemingly weak and prevaricating leader.

Before the party conference at the start of September the Sunday Telegraph predicted: ‘One more fumble and May is finished‘. Wrongly, it turned out.

Her next fumble came soon enough, at the conference when her choking performance was a metaphor for her leadership. Stupidly, her Cabinet colleagues did not go for the jugular then. With an alarming absence of self-deprecation that boded ill she took full advantage of their misguided chivalry. Remember, too, she did not stand down after the election debacle.

It was quite inconceivable then that we would find Mrs May today not just still in situ, but stronger than ever and showing every sign of having positioned herself to ride out the storms coming her way.

Who would have anticipated, either, that the Brexiteers en masse would have proved to be such a very cautious, if not pusillanimous, lot, literally dodging every opportunity offered them to unseat May?

Finally, with these two resignations, that must stop.

Davis would have appeared to written himself out the script by avowing his loyalty to Mrs May. And unless I am very much mistaken he is a man of his word. He told me at the time of his appointment that he’d been given the ‘hardest job in government’. And so it has turned out.

So where does that leave Boris – sadly no Churchill and every so often appearing to be a man determined to self-immolate? The fact is that he had, before today, already dashed his chances of becoming party leader.

It is amazing to remember that just months ago, at the time of Mrs May’s disastrous party conference performance, he was ahead in every party leadership poll. But the outsider Jacob Rees-Mogg came up on the inside and by January this year had not just drawn level but overtaken him.

Today, according to Matthew Smith of YouGov,  Rees-Mogg flies high, with Sajid Javid and Ruth Davidson in the wings and (in a final humiliation) Boris bested by Gove. 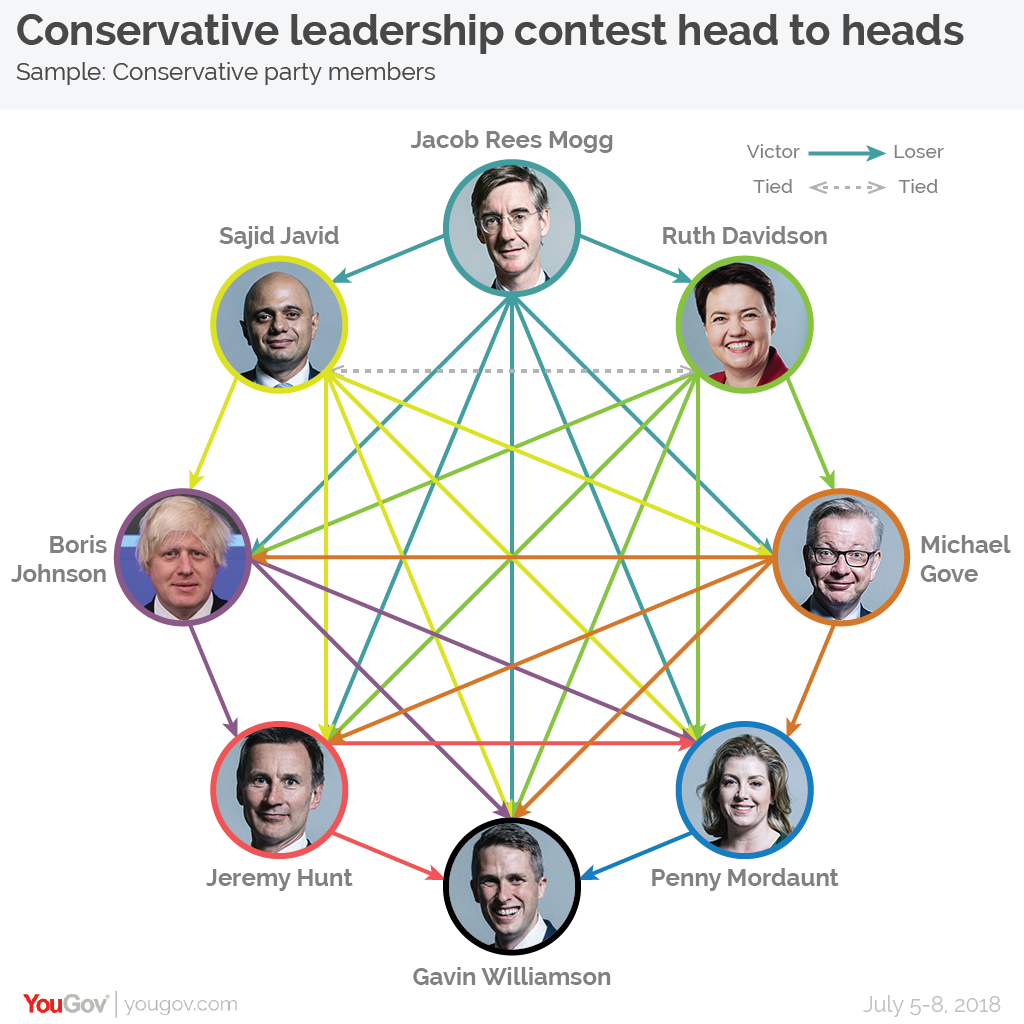 That poll was posted at 2.14pm, shortly before the resignation announcement, and of course things may change now, but I doubt it. Except to his most loyal adherents, Boris is seen as a busted flush.

What these two warhorses have done is to pave the way for the new man to step forward. For the man who has (just) managed to hold the line on Brexit, whose on-air performances, principles and sang froid never cease to impress, so much so that he has a significant otherwise Left liberal youth following.

Voters have taken to the once unfamiliar backbencher Jacob Rees-Mogg without anyone twisting their arms. ‘Moggmentum’ happened. It has no enforcers, no ‘shaming’ you into modernity with its illiberal orthodoxies. This is more of a fan club for a persona, what it represents; for how Rees-Mogg unashamedly and unselfconsciously presents himself and, most of all, for the intelligence, values and civility he portrays. https://www.conservativewoman.co.uk/kathy-gyngell-boris-mogg-pm-no-brainer/

That has not changed. Mogg to challenge May is a no-brainer.

So step forward JRM – your time has come and your country needs you. This is no time for timidity but for steely resolution.