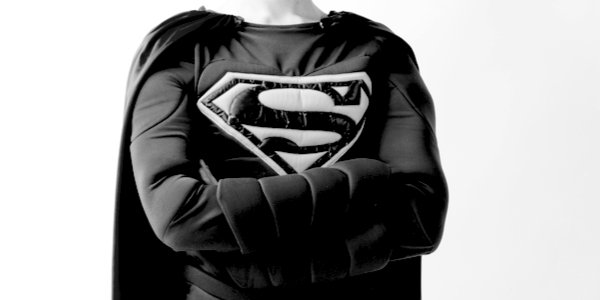 IS it a bird? (No, they’ve all been minced by wind turbines). Is it a plane? (No, they’re banned from flying under climate change laws). Then what the heck is that figure soaring across the sky? Yes, folks, it’s Wokerman!

He’s inherited his superpowers from his illustrious father, along with the skin-tight blue costume with a big S on the chest and the flowing red cape. But young Jon is somewhat different from his dear old Dad.

And, as you may already have heard, the new Superman is bisexual. Well, of course he is. These days we wouldn’t expect anything less. After all, Batman’s sidekick Robin has already come out of the Batcave as being LGBTQ, along with Captain America and probably a few other super-heroes I haven’t heard of.

Just to recap: The original Superman, created in 1938 by writer Jerry Siegel and artist Joe Shuster, was called Kal-El, who came to Earth as a baby in a spaceship after his home planet Krypton exploded. He was adopted by a Kansas farming couple, Jonathan and Martha Kent, who named him Clark. Clark went on to be a reporter for the Daily Planet newspaper, where he met Lois Lane.

Tom Taylor, who writes the new version, called Superman: Son of Kal-El for DC Comics, says he wants the series to be relevant for a modern audience.

‘The idea of replacing Clark Kent with another straight white saviour felt like a missed opportunity,’ he said. ‘I’ve always said everyone needs heroes and everyone deserves to see themselves in their heroes. Today, Superman, the strongest superhero on the planet, is coming out.’

I last read a Superman comic around 60 years ago, when our hero was more straightforward (as well as straight). He saved the world from all sorts of natural and man-made disasters while battling super-criminal Lex Luthor and trying to avoid Kryptonite, the green rock from his home planet that could kill him.

His offspring is a much more sensitive soul. As well as following in his father’s flightpath to deal with everyday calamities and catastrophes, young Jon will get involved in the problems of asylum seekers, global warming, immigration and gun control. As the pressures of being super-heroic start getting to him, he seeks the sympathy of his same-sex partner.

Okay, we all must adapt to changing times and attitudes. And I suppose you can see why DC Comics is updating its most famous and enduring character. Despite all the hype, though, it’s just a marketing ploy to keep up comic sales. Good luck to them – but I do wish they’d spare us the platitudes.

I couldn’t care less about the new Superman’s sexuality, sensitivity or his espousing of woke causes. But, as someone brought up on the original no-nonsense version, it’s just a shame to see that underneath those chiselled features and rippling biceps, the Man of Steel is now – to plagiarise Edmund Blackadder’s immortal phrase – wetter than a haddock’s bathing costume.