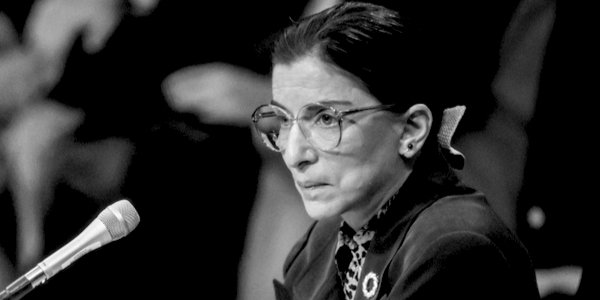 THE savage fight over Ruth Bader Ginsburg’s seat on the US Supreme Court is replete with lessons about the conduct of politics and the importance of constitutions which are at risk of being lost in the fire and fury of partisan battle.

The positions of Democrats, still smarting from the failure of Obama’s last nominee, and Republicans, who see an opportunity to cement conservative control of the court, are beyond reconciliation.

Whichever side wins, the likely outcome is that ordinary, relatively apolitical Americans will lose because the level of polarisation will be escalated in ways that are being clearly laid out by party leaders and the political media. The ultimate advantage in years to come may be for the Democratic party.

There is no equivalent yet in Europe of the hatreds that divide the Democrat and Republican bases, but our recent experience has been that the export of the worst aspects of American culture is inexorable. Neither racism nor wokeness would have secured the foothold they have in the UK without having being pioneered in the US. After the viciousness of the Brexit fight – which for some politically tainted our own Supreme Court – we should not imagine we are immune for ever.

The Supreme Court is one of the three equal branches of US government, but its relative power has grown in recent decades as Democrats and Republicans grew further apart both in Congress and the country. It has become an arbiter between competing visions of America, and its political significance has increased accordingly. Liberals in particular, unable to pass their reforms through a Congress less open to compromise, have turned to the court to get their way.

Millions of Americans have never accepted the court’s legalisation of abortion on grounds that the justices said they discerned a right to it in ‘the penumbra’ of the constitution. The weakness of that reasoning – undiscerned by anyone who wasn’t a Democrat – infuriated the Right and has never been forgiven. In contrast, Europeans who were equally opposed to legal abortion accepted it because it was legalised by their parliaments rather than being imposed by judges.

Since that 1973 Roe vs Wade abortion ruling, the Supreme Court and activist lower court judges have been increasingly essential to making law of screeds of liberal policy on perennial issues like race and sex that would have taken longer to pass Congress.

For that to happen, liberals have needed either to control the court or count on a conservative justice as a swing vote in their favour. This has led to bruising fights over the confirmation of conservatives by the Senate including last year’s scandalous campaign, based on unprovable allegations, against Justice Kavanaugh.

With Ginsburg’s death, Trump has the opportunity to create a nominal 6-3 conservative majority on the court. And it is here that the long and relentless deterioriation in democratic consensualism in the United States meets a potentially dangerous nemesis. If Trump is successful, Democrats are threatening a revenge that will damage the democratic fabric even more as soon as they have the power, which may come as soon as January.

It is frightening that there seems to be no force capable of reversing this inexorable process of self-destruction in which the devil takes the hindmost, leaving angry losers in its wake.

Hence the Democratic theory that the constitution is a living thing that they are free to interpret because we have changed out of recognition since the end of the 18th century. Conservatives insist that its terms are immutable law until amended by Congress and the states as the elected representatives of the nation.

Every country has a constitution or basic law. The fact that the UK doesn’t have a ‘written’ constitution doesn’t mean we don’t have one. It has a body of open-ended law with the same status as any written constitution.

An ideal constitution should be clearly written, be accepted by those who live under it and be applied fairly. The first and best constitution was the Ten Commandments. They identified our wicked, natural state as thieves, murderers and adulterers and enjoined us not to be these things if we wanted to live in a peaceful society. On the whole, it’s worked out well since no one disputes any commandment and the Ten are the basis of all others.

Because of its Roe vs Wade decision on abortion, the modern Supreme Court shares the blame for the parlous state of American politics; not just because it chose to get involved but because it relieved Congress of the need to do its job. Americans really do hold representatives and senators responsible for individual votes they have cast, and several fell in the wake of Obamacare.

The politicisation of the Supreme Court enables congressmen to avoid voting on the big social issues like abortion, gay marriage, immigration and gun control that could cost them their seats. Court decisions are binding but they lack popular legitimacy, the lack of which feeds back into the political whirlpool and helps its trend towards the extremes of Right and Left. Both sides increasingly question why nine unelected justices who have lifetime appointments should wield such power.

Trump has said he will nominate a female justice either tomorrow or on Saturday. Enough Republican senators have pledged to support a candidate they like for the Senate to confirm her before the presidential election. Even if that is not possible and the Republicans lose the presidency, the Senate or both on November 3, they retain the power to confirm the new justice until the end of the year. The Right could rue this for a long time to come.

If Democrats win the Senate, they threaten to scrap the filibuster, a device which when invoked requires 60 votes to pass Bills. A simple majority would ensure passage of all future legislation. This would let Democrats ignore the Republican minority to pass some or all of their wish-list which includes universal heath care, forgiveness of student loan debt, the Green New Deal and creating states out of Washington DC and Puerto Rico, which would mean four extra Democrat senators. They would also pack the Supreme Court to make the Trump majority irrelevant. Say goodbye to Republican government.

That would add up to nothing less than a revolution in American government that would be perfectly permissible under the existing constitution.