Syria can’t go back to a peace it never had 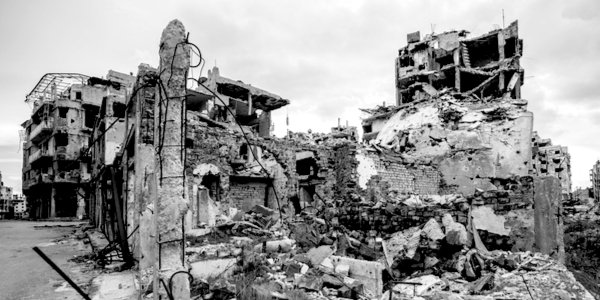 The civil war in Syria has been going on now for seven years. It is a confusing melee of numerous forces, such that it is not quite clear exactly who all the baddies are. Certainly, the regime’s forces, backed by Russia and Iran, are baddies, but they are opposed in part by different shades of Islamist forces, who are also baddies of a kind. Some are backed by Saudi Arabia, with whom we have good diplomatic and commercial relationships. Syria seems to be being used as a battlefield for a proxy war against Iran, with whom we have poor diplomatic relations. This conflict seems part of the endless schism between the Sunni and Shia traditions of the religion of Islam.

Commentary on the war seems based on almost total ignorance of Syrian politics. The fact that the ranks of the ignorant includes the Shadow Foreign Secretary is disturbing. A former human rights lawyer, Emily Thornberry should be able quickly to absorb and assimilate a large amount of facts. On Syria, it is clear she has not done so. So perhaps someone could draw this article to her attention.

Most people seem to think that Syria was a run-of-the-mill vicious Arab fascist dictatorship where the oppressed population were fearfully going about their business when the so-called Arab Spring in other countries inspired them to make a stand and call for reform. When this call was violently rebuffed, the people took to arms against their own government.

This is actually not the case.

There have been persistent calls by Syrians for reform over the years. President Assad, the hereditary dictator, has attempted reform, but the nature of the dictatorship means that genuine reform is impossible, since this would also include Syrians being able to end one-party rule of the Assad dynasty.

There was already trouble in 2008. The regime instituted a crackdown on dissident organisations, with numerous arrests. Usmain Sulaiman, a prominent Kurd, died shortly after being released by the authorities. There were more deaths during the celebration of the Kurdish New Year. Putting down prison riots led to 24 deaths. There was a car bomb in Damascus that killed a Hizbollah commander. Rivalry between two Syrian generals resulted in the mysterious death of one of them amid rumours of a plans for a coup. Another car bomb that exploded outside a state security building killed over a dozen people. Relations with Saudi Arabia were deteriorating due to Syria’s involvement in Lebanon as the region began to divide between supporters of Saudi and Iran.

Ballot-rigging by officials during parliamentary elections caused rioting in 2007. Kurds were called upon to boycott the voting by parties banned by the regime. A prominent Islamist politician was assassinated. Tension increased in the region as Syria made new threats to Israel while Iran pledged $1billion to allow Syria to re-arm. It position as a client state in a regional coalition against Saudi Arabia was being developed.

Syria’s prominence in the region was compromised in 2005 when its assassination of a Lebanese former Prime Minister caused it to be forced to withdraw its soldiers from Lebanon amid international condemnation and isolation, driving Assad into Putin’s arms. There was a purge of intelligence officials and an Interior minister committed suicide.

In 2004, there was widespread disruption based around Kurdish discontent. Damascus was plagued with bomb explosions. A Hamas commander was killed by a car bomb in the capital. The US imposed additional economic sanctions while its drones patrolled the border with Iraq.

The US invasion of Iraq in 2003 cut off income from lucrative sanctions-busting operations, causing an economic downturn. The USA imposed sanctions to punish Syria for its sponsoring of terrorism, its weapons programmes, and illicit support of Saddam Hussein.

It is ironic that Syria ended its 48-year run of martial law, imposed after the coup of 1963, just as the Arab Spring started.

It is this troubled recent history that makes a nonsense of Jeremy Corbyn’s calls for a ‘peace’ conference. The nature of dictatorship before the civil war means there was not actually a civil peace to which Syria can return. Dictatorships such as Assad’s keep power by threatening or making war on defenceless citizens. The time when a peace conference should have been called was before the fighting started. But no dictatorship with an illegitimate grip on power voluntarily comes to the table with its opponents.

The fighting started because the dynastic Assad regime was unable to provide the political, social, and economic settlement wanted by the people. Instead all they got was a dictatorship that, like all dictatorships, delivered an inefficient, incompetent, paranoid, predatory, corrupt and faction-ridden government beset by violence. The Syrian people had had enough. They cannot and should not be required to go back to this by an international conference.

Unable to vote in the polling station against the Assad dynasty, the Syrian people are voting with their feet and their lives. Assad and his corrupt political party cannot be part of the future of Syria in any conference or settlement. To do otherwise would be the final insult to all those Syrians who have lost their lives in the name of peace and freedom. Emily Thornberry, please take note.