ANOTHER day, yet another manifestation of Project Fear Mark 2, the alleged economic meltdown if the UK were to leave the EU with ‘no deal’. This time it is the Office of Budget Responsibility (OBR), a fine institution for which I have a great deal of respect. But, alas, it has allowed itself, willingly or otherwise, to be dragged into the quagmire.

There is, of course, a concerted campaign against the prospect of a ‘no deal’ Brexit. But, as many of us have attempted to point out over the months, we would not be descending into lawless chaos if there were ‘no deal’. We would be trading under the tried and tested rules of the World Trade Organisation (WTO). Furthermore, over half of our exports currently go to non-EU countries, most of which do not have trade agreements with the EU. In addition, our non-EU exports are growing significantly faster than our EU exports, suggesting the benefits of ‘frictionless’ trade, and the glories of Customs Union and the Single Market, are grossly exaggerated for political reasons.

In addition, the European Commission has made wide-ranging contingency plans for a ‘no deal’ Brexit and we are reliably informed by Sir Mark Sedwill, the Cabinet Secretary, that the UK government is in ‘pretty good shape’ to cope. Granted, there will be some disruption on leaving under such circumstances; that is only to be expected as businesses adjust to a new world, but chaos and significant economic damage – surely not.

However, attempts at balanced debate have not stopped the voices of doom. I discussed the Government’s forecasts and the Bank of England’s scenarios, both released in November 2018, which were, frankly, rather absurd, in a recent piece for Conservative Woman. So I will not dwell on them further here. But what I find so bizarre about the current debate is that many of the key players involved in Project Fear Mark 1 ahead of the 2016 referendum are uttering similar apocalyptic horrors in Project Fear Mark 2. Has the Treasury, for example, no shame that its ‘recession’ threat back in May 2016 has been comprehensively proved wrong by subsequent events? Or perhaps it does not care.

The OBR’s recently released ‘July 2019 Fiscal risks report’ (FRR) includes its assessment of the impact on public finances of a ‘no deal’ Brexit. Some of the report makes sound reading and is worth looking at. For example, the OBR warns of the Chancellor’s de facto abandonment of the Government’s legislated objective to balance the budget by the mid-2020s. And the £27billion-a-year NHS settlement announced in June 2018 ‘has cast doubts over the Treasury’s usually firm grip on departmental spending’. All well and good.

It is when it considers the effects of a ‘no deal’ Brexit on the public finances that I begin to have my doubts. It is vital to understand the OBR’s methodology. The OBR’s March 2019 forecast for the Spring Statement was ‘conditioned’ on exiting the EU ‘smoothly’ with a deal. The FRR looks at ‘no deal’. The OBR says: ‘ . . . given the leadership contenders’ willingness explicitly to countenance a “no-deal” exit on 31 October, we use the “stress test” in this FRR to illustrate the potential fiscal impact of a no-deal, no-transition Brexit scenario set out by the International Monetary Fund (IMF) in its April 2019 World Economic Outlook.’ In other words, the OBR’s analysis is dependent on the IMF’s April projections. And, if you have doubts about the IMF’s projections, you must have doubts about the robustness of the OBR’s assessment of the impact of a ‘no deal’ Brexit on the public finances.

And, yes, I do have doubts about the IMF’s analysis and I expressed them in a piece for The Conservative Woman entitled ‘The IMF’s No Deal forecast should come with a health warning’ (12 April 2019). Starting with a general point, all forecasts are based on fairly heroic assumptions and are intrinsically vulnerable to major forecasting errors. The IMF’s are no exception. This is not to condemn economic forecasting or criticise the IMF in particular, it is merely to warn about the nature, and limitations, of economic forecasting. Caution is, therefore, advised, in interpreting the results. Forecasters should be modest. More specifically, one of the IMF’s more crucial and damaging assumptions claimed that non-tariff barriers (NTBs) to trade would rise by an additional 14 per cent in tariff-equivalent terms in a ‘no deal’ Brexit, even though UK and EU regulations would initially be identical. It has been widely questioned as being overly pessimistic and, arguably, calls into question the impartiality and validity of the IMF’s projections.

The OBR explains that the IMF’s ‘no-deal, no-transition Brexit’ scenario it uses for the FRR ‘is not necessarily the most likely outcome and it is “relatively benign” compared with some. A more disruptive or disorderly scenario, closer to the stress test we considered two years ago, could hit the public finances much harder’. In other words, as pessimistic as the IMF’s projections they used were, they were actually quite ‘benign’ and significantly more benign than a ‘disorderly’ Brexit!

Returning to the OBR’s methodology, the OBR, therefore, took the IMF’s economic projections (and their assumptions on tariffs, lower migration and border costs) as its starting point. But, in addition, it had to make further assumptions for its ‘stress test’. It assumed an immediate 10 per cent fall in the pound and a loosening of monetary policy. But discretionary fiscal policy was unchanged from that set out in March’s Spring Statement, though automatic fiscal stabilisers were assumed to operate freely.

Unsurprisingly, the plunge into ‘recession’ garnered many lurid headlines. But it really should be questioned. A plunge into recession, given the resilience of the economy, just does not seem credible.

. . . implications for the public finances

Given the ‘no deal’ gloom pervading the economic forecasts, it is hardly surprising that the OBR concluded that ‘no deal’ would be very damaging to the public finances, even under its relatively ‘benign’ IMF-inspired scenario. Charts 2a and 2b compare the March forecasts and the July ‘no deal’ projections for public sector net borrowing (PSNB) and public sector net debt (PSND) as a percentage of GDP. According to the OBR, ‘no deal’ would add around £30billion a year to borrowing from FY2020 (2020-21) onwards and around 12 per cent of GDP to net debt by FY2023 (2023-24), compared with its March forecast baseline. 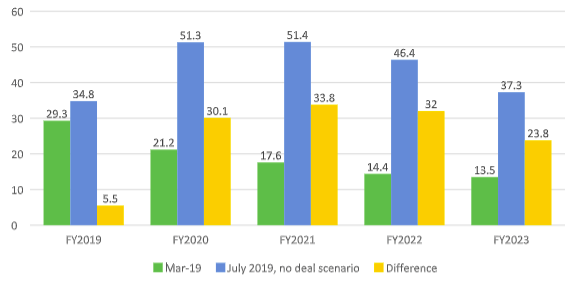 Share
Facebook
Twitter
WhatsApp
Email
Previous articleYoung girls are still being groomed – not just by gangs but the state too
Next articleThis, Mayor Khan, is where your trans agenda goes so tragically wrong