Taking out this monster makes the world a better place 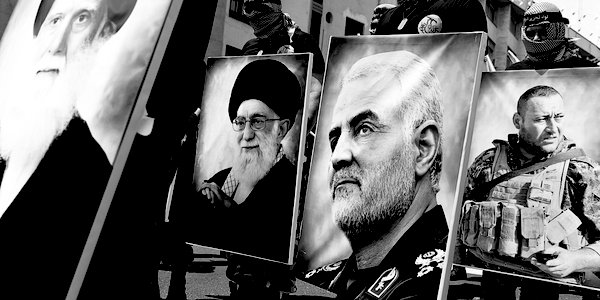 THE most evil leaders in history usually had equally notorious henchmen who worked out the detail. Think of them like the underbosses in a gangster hierarchy. Kaiser Wilhelm had Ludendorff, Hitler had Himmler, Stalin had Beria; the list goes on. What was distinctive about these underbosses is that they enjoyed public exposure, although by necessity at a level lower than their boss.

It is rather strange, therefore, that in our modern era these evil underbosses are all but invisible. A plausible explanation is that it is easier to practise evil if it is not so obvious that evil is what is being practised. Having an invisible underboss is one way of concealing the evil.

Which all brings me to the late Qasem Soleimani.

Yesterday Qasem Soleimani was all but invisible. His Wikipedia page started as a stub 12 years ago. It took a further two years for it to double in size, but is now being updated every few minutes. This is because Soleimani was killed in a precision missile strike by the orders of the United States Government. His demise is everything to do with the fact that he was the underboss of Ayatollah Khamenei when it came to spreading misery outside of Iran.

Like almost everyone else on the planet I now know that Soleimani was the go-to guy for organising terrorist and paramilitary outrages across the globe in the interests of the Iranian government. In fact had he not been killed in the missile strike, it would have been Soleimani’s job to organise the retaliation for his killing. Nobody did it better for Iran than Qasem. Any reaction by Iran will be performed by a second-rater.

The usual suspects have made the usual noises about the demise of this monster. Keir Starmer, a man named after the well-known socialist anti-Semite, announces: ‘There’s a clear danger of further violence and escalation in the Middle East.’ Clive Lewis, an ex-military man, confidently states: ‘Violence begets violence, especially without a thought-out military strategy.’ Who knew Mr Lewis had a hotline to the Pentagon? Lisa Nandy goes a bit further: ‘World leaders must stand up to Trump. The last thing we need is another all-out war,’ she thunders. This is pure nonsense. Iran’s external military strategy is based almost exclusively around asymmetrical warfare, the use of irregulars, militia, terrorists and useful idiots, some suicidal, to project its power through the threat of massacring innocent civilians. Iran would never use its standing armed forces in set-piece battles in ‘all-out war’ for the simple reason that Iran would lose, and lose badly and quickly. Qasem Soleimani was in charge of Iran’s global strategy of disruption and chaos, and, unfortunately for the world, was rather good at it. Taking him out is a way to reduce the destabilisation of the Middle East, since Soleimani was responsible for much of this destabilisation.

Jeremy someone-or-other has also piped up, warning: ‘The US assassination of Iranian general Qasem Soleimani is an extremely serious and dangerous escalation of conflict in the Middle East with global significance.’ The socialist has-been is, of course, wrong.

Asymmetric warfare does not rely on lightning strikes by concentrated forces and pincer manoeuvres to defeat an enemy. Instead it is the constant drip of comparatively low-level violence, mostly conducted by individuals or groups virtually indistinguishable from civilians, designed to create a background of fear and to weaken morale and resolve until desperation forces compromise where such compromise was previously unthinkable. It is the form of warfare that has granted terrorists access to chancelleries the world over for decades. It does not ‘escalate’, as such an escalation into more overt warfare would be counter-productive as populations would rally to governments and any useful idiot apologists, such as this ‘Jeremy’ chap, would be marginalised.

Other commentators are calling this missile strike a ‘Sarajevo moment’. They are not referring to the hosting of the 1984 Winter Olympics, but events seventy years previously. This is also nonsense. Austria-Hungary under Franz Josef had been itching for a reason to invade and crush Serbia for a number of years. Iran has not had such a similar desire to up the ante against the USA or Saudi Arabia.

Instead, this is a ‘Prague moment’. The closest analogy has to be Operation Anthropoid, where Czech exiles, armed and trained by the Special Operations Executive, were parachuted into Czechoslovakia with orders to assassinate Reinhard Heydrich, the despotic governor of this occupied territory, whose other job was to be second only to Hitler’s underboss Himmler. Heydrich flaunted his power by commuting in an open-topped limousine and the commandos took advantage of his vanity. Not felled by gunfire, Heydrich succumbed to infection caused by wounds from a grenade which had driven horsehair from seat cushions into his insides, something curable with antibiotics, but the Germans were more interested in researching nerve gases. The Germans retaliated by massacring the occupants of the town of Lidice, which did nothing for anybody but was used as prime evidence in the Nuremberg trials, and has damned Germany in the eyes of the world for decades.

Iran would be stupid to conjure up a latter-day Lidice, as those hostile to the USA are predicting, if not hoping, Iran will do. After exporting misery worldwide for years, Iran has been put in its place and should know to stay there.