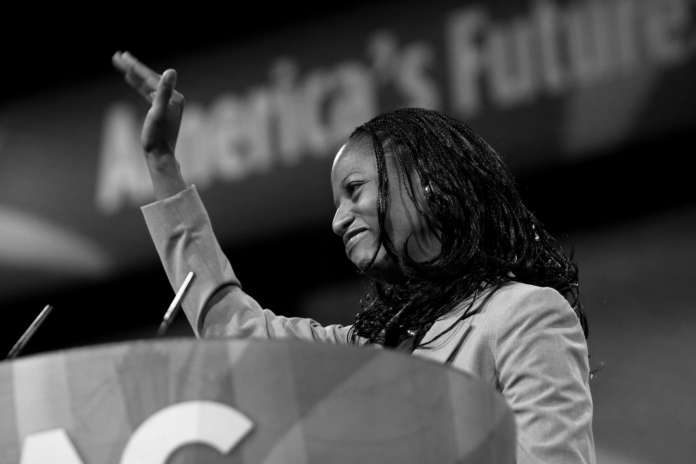 Darron T. Smith wrote a disparaging article in the Huffington Post about Mia Love, who won in Utah and became the first black female Republican to be voted into Congress.

In his article entitled ‘She Looks Black, but Her Politics Are Red: What Mia Love’s Victory Means for the Face of the GOP’, Smith, who is a black male professor, argues that Mia Love is out of touch with the realities of the struggles faced by black people in America; she benefits from ‘white privilege’; and her success is a dangerous development. He wrote the following:

“Black Americans are the only racial group that votes in a bloc and, arguably, the only group to vote their political interests. But Mia Love, viewing herself and others through the prism of individualism, strays from the political stances that would benefit the black community as a whole, which is why a political figure like her is so compelling.

“Mia and others like her are seemingly out of touch with the political realities of African Americans and what remains at stake for them.”

Smith’s attacks against Mia are astonishing and outrageous. He seems to be suggesting that somehow, centre-right/socially conservative/libertarian ideas of limited government and personal responsibility are incompatible with being black, and that by furthering those ideals Mia is acting against the interests of blacks and furthering a white agenda.

My own political journey has been from the centre-left to the centre-right. The rhetoric of the Left may sound attractive and fun but, in my opinion, the facts of life are mostly conservative. Big government stifles innovation, creativity and entreprenualism; large welfare state provisions weaken society and family bonds by encouraging irresponsibility; and boys need fathers.

Labour always talks about how well recent immigrants do in schools, and the work ethic of economic migrants who’ve put more into the economy than they take out, but they won’t discuss the fact that most recent immigrants are socially conservative, have very strong family structures and value marriage, and that the reason why the work ethic is so high is because most come from countries where there is no welfare state or very minimal state provisions which results in the high work ethic. Big government and statist ideologies encourage officialdom and excessive bureaucracy which can destroy initiative.

Black conservative economist of Stanford University Thomas Sowell has talked about the conflict of visions. Many on the Left believe that the world can be perfected and that in order to do so, human beings must relinquish control to an elite set of human beings who will micro-manage affairs on our behalf and create the utopian society. Whereas many on the centre-right believe that citizens not elite bureaucrats are responsible for shaping society, limited government and checks and balances are the best way of stopping tyrannical government, and free markets are the best way of encouraging equality of opportunity.

But Smith says: “Mia’s existence seem to be diametrically opposed to her values that are grounded in a white, male, Christian context”.

I first heard of Mia Love a few months ago and I was fascinated by the fact that she was a black woman whose ideas on ideas on localism, direct democracy, and free markets are so similar to the ideas espoused by UK conservative politicians Dan Hannan and Douglas Carswell.

I became interested in localism and direct democracy because of my opposition to the European Union and, although in the UK we talk a lot about diversity, there seems to be little diversity of opinion among black politicians and commentators, who all mostly support the European Union project.

In a political campaign video on YouTube, Mia said the following about localism and democracy:

‘’The best solutions are often found at a local level, there isn’t a Republican or Democrat issue it’s all a people issue, federal government does too much and it would be better to have more local control, limited government doesn’t mean cutting everything but applying things at the appropriate level’’.

Mia’s message of localism, pushing power away from bloated centralised institutions, and making politics more accountable to the people seems common sense and I fail to see why such an agenda is advancing white interests, as Smith alleges:  ‘’Mia Love and her red political ideology do not align with the needs of black Americans, historically disenfranchised people who remain left out and left behind.’’

In my opinion, Mia’s simple and straight-forward message is that change is not going to be top down but bottom up. It’s hopeless waiting for the government to change things or waiting for a new government scheme. Hayek famously said that “while an equality of rights under a limited government is possible and an essential condition of individual freedom, a claim for equality of material position can be met only by a government with totalitarian powers.” Limited government is better than an authoritarian government. People flee communism, but very few people flee capitalism.

Smith adds:  “Her accomplishment is quite dangerous for people of colour, sending a message that society is post-racial.”

What I also find quite fascinating is the fact that many commentators like Smith talk a lot about so-called white privilege but very rarely discuss racism which exists in ethnic minority communities. The idea that it’s only white people who can be racist is wrong. There was movie called ‘Dark Girls’, which explored the deep-seated biases and attitudes about skin colour particularly dark skinned women, outside of and within the Black American culture. Further, I’ve heard some – not all – black men say that they won’t date black women and only date white or Asian women and that’s racist.

Smith says that Mia’s win was a “stunning triumph in the predominately white and conservative state of Utah, where only 1.3 percent of the population is black”

Martin Luther King declared: “I have a dream that my four little children will one day live in a nation where they will not be judged by the colour of their skin but by the content of their character.”

Surely, Mia Love is a living embodiment of that vision and it is outrageous that she has been attacked and called a traitor to her race because she has chosen to form her own independent set of personal and political ideas in a free country.