TCW Summer Reads: The song of the sparrow 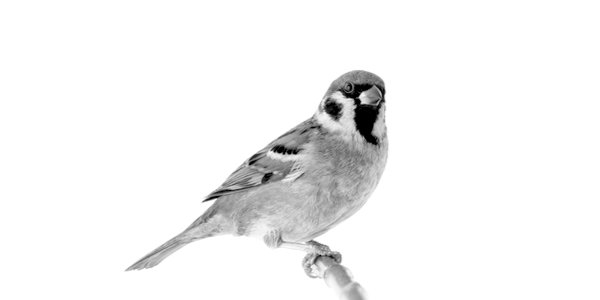 Sold for a Farthing by Clare Kipps (available second-hand)

This is the story of a foundling sparrow, but it is more than that: it tells of an England so far removed from today that it could be the Middle Ages. Yet it was published in 1953, which is within my lifetime.

The writer is Clare Kipps, and we learn next to nothing about her. She was a widow; no children or grandchildren are mentioned. She had been a professional musician, and was a friend of the poet Walter de la Mare, to whom the short book is dedicated.

The action begins on July 1, 1940, ten days before the first skirmishes in the Battle of Britain. Mrs Kipps (it would be impossible to call her Ms or simply Kipps) was a volunteer air raid warden and was returning home from duty when she found a tiny newly hatched bird on the doorstep of her bungalow in a London suburb. It was naked and apparently lifeless, but ‘feeling that if a new-born infant is left outside one’s door something should be done about it’ she took it in and tried to revive it, dripping a little warm milk down its throat every few minutes. Eventually there was a slight movement of one wing, so after adding a little bread to the last feed Mrs Kipps made the infant comfortable in a small pudding basin lined and covered with wool and put it in the airing cupboard for the night, fully expecting to find it dead in the morning.

‘To my astonishment, early next morning I heard a faint, continuous sound coming from that airing cupboard – an incredibly thin yet happy sound, the kind of noise a pin would make if it could sing; and there was the little creature, still in his porcelain cradle, but warm and alert and crying for his breakfast.’

This is the start of a relationship which is documented in loving and fascinating detail (warning: until you have finished the book do not read the foreword by Julian Huxley – he was a distinguished biologist but a useless writer of forewords, giving away the whole story). The bird turned out to have a deformed wing and foot so he could not live in the wild. At some point it was decided that he ought to have a name so he was called Clarence, but it doesn’t seem to have stuck with Mrs Kipps, who never uses it. He slept in her bed (where he was irreproachably hygienic) and snuggled into her jumper. He filched her hairpins. He would sit on her shoulder as she played the piano. Perhaps the most surprising thing is that the sparrow learned to sing, which everyone knows that sparrows can’t do. No one has documented this before or since, probably because no one else has had such a close relationship with a sparrow. His singing seems to have been triggered by the piano, particularly music that trilled and scales played rapidly in the treble. Starting hesitantly, after some months of practice he had two distinct songs. The first, the introduction, was ‘an expression of pleasure, good humour and simple joie de vivre’. The second was ‘an outpouring of rapture’ which Mrs Kipps was able to notate. Both were usually in the key of F Major ‘although the second part varied in pitch by as much as a minor third, according to its intensity’.

The backdrop to the story, of course, is the war, and this is where we are taken into a long-lost country. Mrs Kipps refers to it only in the most minimal and matter-of-fact way, and perhaps it is all the remarkable for that. The Blitz began in September 1940, when the sparrow was a couple of months old, and towards the end of the month a bomb destroyed her neighbour’s house and badly damaged her own. Coming back from air raid warden duty she feared the worst but calling out ‘Are you alive?’ she was answered at once by a little voice, and she found him sitting placidly on the swing in his cage amid bricks and broken glass.

Mrs Kipps and the sparrow had to move to another house, also damaged, where they were joined by a bombed-out family of relatives. This family had a cat so the bird had to stay in an attic bedroom.

‘It was a dreary life for the little fellow, though he seemed happy and made no complaints. We, at least, had the excitement of the bombs and, as the old lady said in the East End, “Those blooming air raids did take your mind off the war”.’

The young bird demonstrated a talent for performance, such as turning a playing card round and round in his beak, or running a matchstick back and forth through his beak accompanied by a musical box, as if playing the flute. He was in demand for parties and to entertain bombed-out Londoners at rest centres. One night Mrs Kipps was taking him home in his small felt-lined travelling box, buttoned securely into her warden’s tunic, when she became lost in the blackout and fell into a deep bomb crater. The pair had to spend the night there until it was light enough to see how to get out.

The 72-page book is of its time, when women kept house and men provided. The war was borne without complaint. There was an unselfconscious and unquestioning Christian faith.

As the bird aged, Mrs Kipps asked a professional photographer to take some pictures. One shows him gazing at an open book, chosen at random for its size, as if reading it. After the pictures were developed Mrs Kipps realised that the words his beak was pointing at were these, from the Gospel according to St Matthew: ‘Are not two sparrows sold for a farthing, yet not one of them falls to the ground without your Father?’

She writes: ‘We are assured on the highest authority, and in no uncertain language, that no sparrow falls without the knowledge of the Father of Love. I have confidence that mine will not be an exception.’

Share
Facebook
Twitter
WhatsApp
Email
Previous articleIf banks did this to students, it would be called mis-selling
Next articleWarning: This police safety advice applies only to women with penises