NewsPaperthe art of publishing
HomeNewsThanks, lads, for turning me back into an England fan
24

Thanks, lads, for turning me back into an England fan 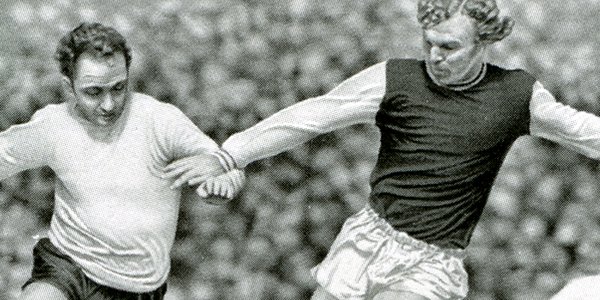 The greatest day of my young life was July 30, 1966, when England won the World Cup.

Aged 11, I was watching my grandparents’ black-and-white TV – they had a 20-inch screen while ours was only 17 – as Geoff Hurst slammed home that final goal against West Germany.

I ran three times round the block whooping with joy, hoping to share the moment. But the streets were empty and it was back to the old folks, who didn’t really see what the fuss was about.

In 1970 England had an even better side but lost in Mexico, when the Germans got their revenge.

Disappointment turned over subsequent years into disillusionment and boredom as a succession of national teams failed to fulfil their potential. By the 1980s, as a national newspaper sub-editor, I was happy to work on match days, writing the headlines rather than living the story, which usually involved defeat in a penalty shoot-out.

I was expecting a typically tedious England World Cup performance, probably eking out a couple of 0-0 draws in the first round before slinking home following a heavy defeat by the Belgians.

The clue that something might be about to change came with the opening match and the National Anthem when, to my astonishment, I saw that every member of the team was singing. Then came that last-ditch winner by Harry Kane against Tunisia, followed by the thrashing of Panama. After the non-event against Belgium Reserves, it was Colombia in the last 16. Another penalty shoot-out, but this time we won. England had behaved, and played, like a team.

And this was the difference. Unlike the disaffected prima donnas of the past, instructed by foreign managers through interpreters, this gave every appearance of a group of friends with traditional values, happy to play for each other and the boss.

In a recent interview, former England and Manchester United defender Rio Ferdinand confessed that the teams he featured in were torn because they could not put club rivalries aside. Contrast that with the happy crew led incongruously by manager Gareth Southgate, in waistcoat, collar and tie, looking like the geeky, super-keen maths teacher who would insist that trigonometry is fun.

Many of the current team echo a past age when stars such as Tom Finney, who worked as a part-time plumber to supplement his £14-a-week wage, would take a bus to the match along with their adoring fans. Today’s Kieran Trippier and Harry Maguire would not look out of place emerging covered in coal dust after a shift dahn t’pit.

Who would you rather have beside you in the trenches – Trippier and Maguire or Portugal’s Cristiano Ronaldo, plucking his eyebrows and waxing his six-pack, or the ridiculous Brazilian Neymar, rolling around in the mud in apparent death throes after tripping over a gas mask? And who would you follow over the top – clean-cut Captain Harry Kane, or Paul Pogba, when he’s decided what colour he wants his hair to be that day?

On to the quarter-final against Sweden. Half an hour gone, Maguire scores a bullet header and, what do you know, the missus catches me sobbing on the sofa. I’m an England fan again. Why? Because I actually feel represented by the likes of Jordan Henderson and Jordan Pickford, who would be in the boozer cheering for England if they weren’t playing. I even have a soft spot for Raheem Sterling, so desperate to score for his country that he falls over his feet whenever he gets a chance on goal. These guys actually give the impression that they feel privileged to play for England.

Now cynics might say that the whole ‘band of brothers’ thing is just public relations and the squad are the usual bunch of tattooed neanderthals who can’t stand the sight of each other. To which I would reply: Is the Football Association clever enough to pull off such a stunt? The FA is to public relations what the BBC is to balanced reporting over Brexit. If in doubt, I suggest you Google the words Faria Alam and Sven-Goran Eriksson.

So on we go to the semis – France v Belgium tonight, England-Croatia tomorrow. England are the outsiders, with the others boasting more talented individuals. But if Kane and Co continue to play as a team, greater than the sum of its parts, they can win the whole thing. And even if they come home fourth they will be heroes in my book. I thought it was all over. It isn’t now.