The Annunciation, a marvellous mystery 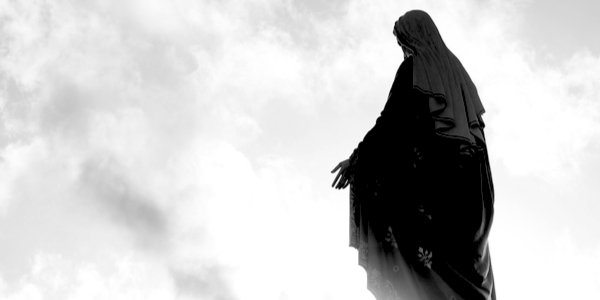 All things transitory are but as symbols sent: The Eternal Woman leads us above.

No one lives there, but some have been close to it and brought us back pictures of it, its sound, its taste.

Adam, as you might expect, was the first to come near it: ‘And he heard the voice of the Lord God walking in the garden in the cool of the day.’ (Genesis 3:8)

Here it is again: ‘Be not afeard, the isle is full of noises, sounds and sweet airs that give delight and hurt not.’ (The Tempest, William Shakespeare)

It turns up in all times and all places: ‘Tyger, Tyger burning bright, in the forests of the night / What immortal hand or eye could frame thy fearful symmetry?’ (William Blake)

And: ‘Come in under the shadow of this red rock

And I will show you something different from either

Your shadow at morning striding behind you

Or your shadow at evening rising to meet you

I will show you fear in a handful of dust.’ (T S Eliot, The Waste Land)

And in the Pieta in Giotto’s fresco of the Padua Scrovegni Chapel. In the final chorus from Bach’s St Matthew Passion, and in the gratuitous perfection of Rodin.

And, thank God, in a thousand places. It doesn’t have to be the sunset or the whirlwind, but in some still, small voice. Or whatever it is that inhabits the silence.

The mysterium tremendum et fascinans is no cultural snob, not the sole province of the gallery-gawpers or those who can afford the seats at Glyndebourne. The mystery can and does turn up anywhere – when you’re dusting the mantelpiece or doing the dishes.

Supremely, the mystery is ethical. Or, to talk straight, it is goodness. When he knew he was about to die, Thomas Aquinas, the supreme philosopher and theologian, came across it – or rather it came across him – as he was at his prayers. Afterwards he said to his friends: ‘After what I have just seen, all my writings are as straw.’

He made his confession and his priest turned to Thomas’s friends and said: ‘It was the confession of a five-years-old child.’

I said the mystery is ethical and I said it is goodness. But I must be simpler and more direct. The mystery is love. It is in self-forgetting. Love is giving yourself away. Walking with God in the garden in the cool of the day would make you forget yourself, as would being on that isle with its sounds and sweet airs.

I have still hardly come near it. It is in the action of the brave young man who during the Holocaust pushed a young woman out of the way and took her place in the queue for the gas chamber.

And the poor widow who made bread for Elijah (1 Kings 17:7). In that little girl who said to her crabby father: ‘Let me see you put on your clothes daddy, then I will know how to do it for you when you are old.’

The one who came closest to the mystery, the love which is the centre of all things, is Our Lady, the Blessed Virgin Mary.

Do not think that the Annunciation and the Immaculate Conception were calculated transactions, more of accountancy than divinity.

Think like this: We know that love between a man and a woman can be wonderful beyond description. So what must the love between God and that young Jewish girl have felt like – for both of them? And don’t be shy or squeamish. You are allowed to think about these things, because they were real events in our history.

I was there when it happened. It was like this. Mary wasn’t forced. She was asked. And she said Yes! straight away. Then He warned her: ‘A sword shall pierce your heart also.’

‘Because you will bear my Son. And when He is still a young man you will have to watch Him being put to death on a cross.’

When I heard her say her Yes! to the Father, I said to her: ‘Queen of Heaven … Glorious Mother!’

And she answered: ‘Don’t talk to me like that! I’m only the handmaid.’

Pray for us sinners now and at the hour of our death.