NewsPaperthe art of publishing
HomeNewsThe arts column: Bawden and the road to nowhere
0

The arts column: Bawden and the road to nowhere 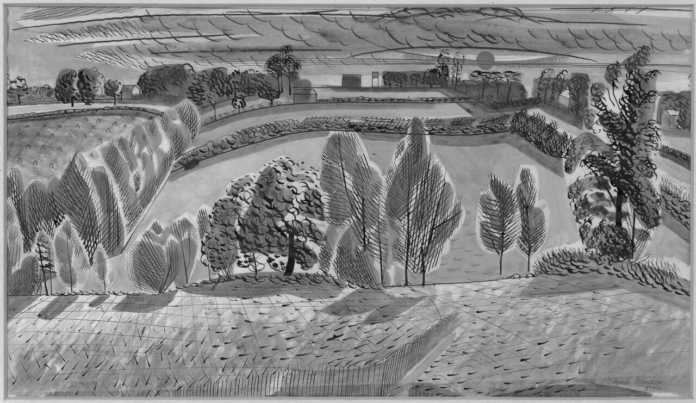 His facility as a designer has tended to obscure his talent as a painter, which this exhibition showcases.

Bawden was born in Essex in 1903, the son of an ironmonger. He met Eric Ravilious, the lost hero of British 20th century art, at the Royal College of Art in the early Twenties. The pair were taught by Paul Nash, the landscape painter, war artist and sometime surrealist.

Bawden and Ravilious set about reinventing watercolour, bringing it into the age of modernism. In the years after college they influenced each other and worked on mural projects together, all now sadly lost. Ravilious also took on various design assignments but continued to evolve his haunting landscapes, while Bawden seemed more restless and more excited by the challenges of commercial work. A 1939 London Transport poster for Kew Gardens, a location that Bawden, a keen gardener, loved, is remarkable: a collage of simple colour blocks showing flora, the Palm House and the Great Pagoda. It is hard to believe it is a pre-war image, it seems so ahead of its time.

In 1940 Bawden was appointed one of the first official war artists of WWII. He spent time in France, the Middle East, Africa and Italy. There is a generous selection of the war paintings here. These ink and watercolour works are atmospheric and penetrating, built up in melancholy blues and dusty pinks and delineated in the ingenious visual shorthand he had developed much earlier in charming paintings such as Untitled Landscape with Sunset (1927). Ahwad Abudullah, son of Abdulla the Coffee Man and An Iraqi Jew: Yusef Haim Shamell, A Carpenter are haunting portraits. Sergeant Horne might well serve as a definitive portrait of a certain type of English soldier abroad in the last century. Scium Basci shows an African policeman in Italian uniform looking melancholy and slightly rueful. What, he seems to say, have I got mixed up in?

These paintings refute the modern Marxist criticism of ‘male, pale and stale’ art: Bawden, like so many other European artists, was keenly interested in other cultures. 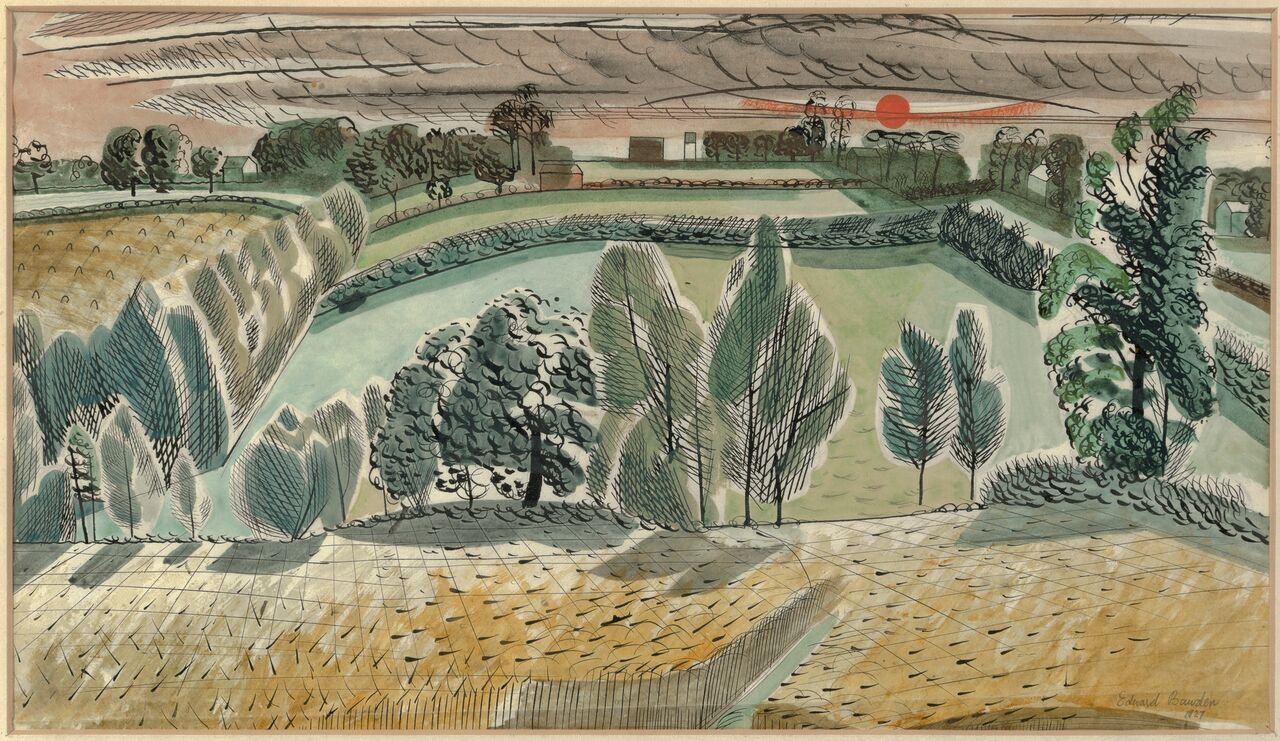 Underneath his mastery of line and design, the keynote with Bawden is humanity and gently humorous observation. He even managed this during the war. The Showboat at Baghdad depicts a British paddle-steamer moored next to an improvised open-air cinema where hundreds of Arabs are watching a British propaganda film about sheep-farming, or so Bawden claimed. Look closely and you find loafers, servicemen, policemen, children and, most Bawdenesque of all, three dogs running in circles near the screen. No photograph could get anywhere near what he achieves with this painting. Baghdad: A View of the River Tigris shows an Indian camp in long blue shadows and hot sun. As you peer at the picture, details of the camp in the trees emerge. The painting is filled with life. 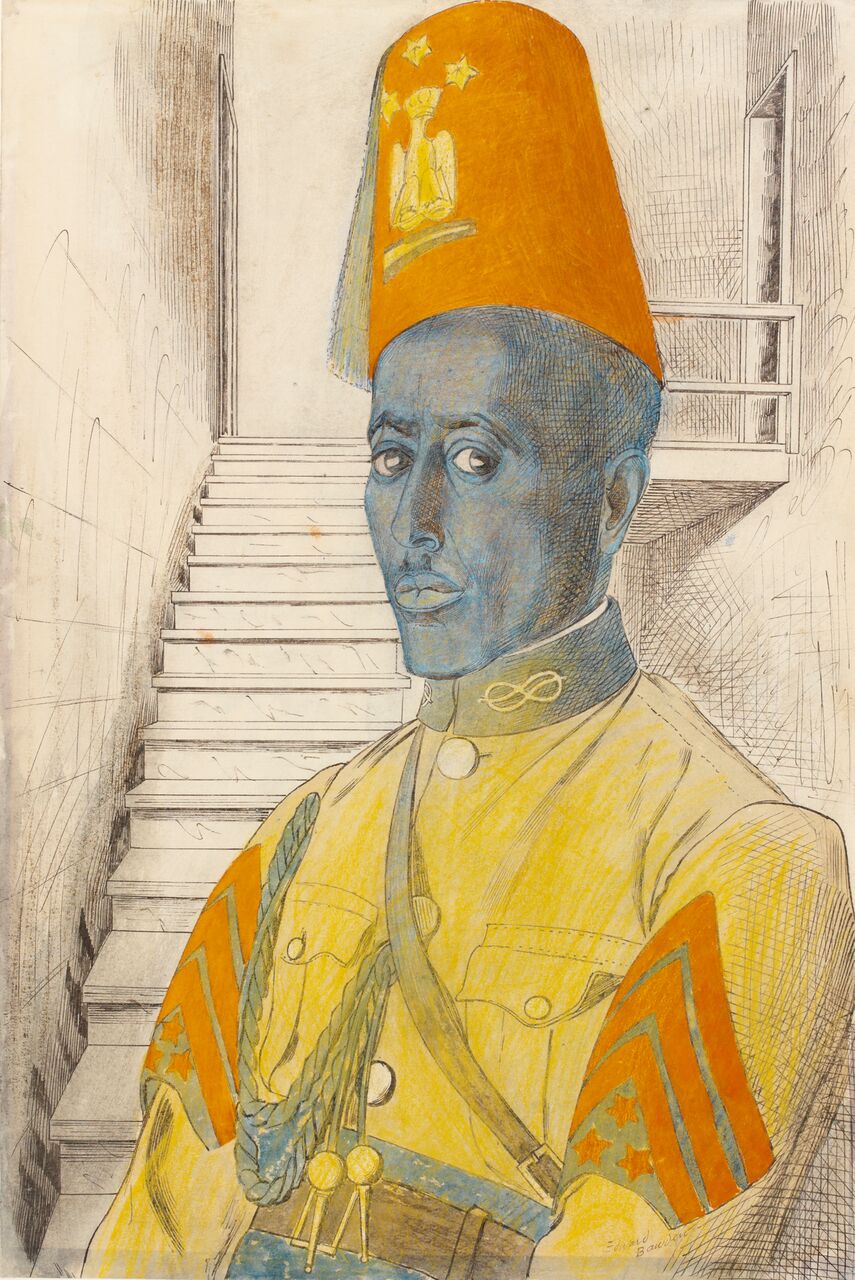 The grey and solemn Catholic Church, Addis Ababa seems related to the neo-romantic movement that was happening back in Britain. Paul Nash, Bawden’s old teacher and part of that movement, had encouraged Bawden to discover the locus geni, or sense of place, and in his wartime paintings he managed this brilliantly. The masterpiece of that period is Menelik’s Palace; the Old Gebbi, also painted in Ethiopia, in a rainstorm. This magnificently conceived and drawn watercolour anticipates Bawden’s post-war high style in linocuts: precision craftsmanship and an interest in architectural detail of byzantine complications. Liverpool Street Station, a dazzling linocut from 20 years later showing its stained, cathedral-like interior and roof, is intelligently hung opposite Menelik’s Palace to make the point: he found a way forward in English art while sitting in the middle of Ethiopia. The bold and arresting Brighton Pier pushes further into a sort of modernist semi-abstraction.

After the war Bawden returned to Great Bardfield in Essex, where he lived for decades with his wife and children. He returned to watercolour painting from time to time. The melancholic Agave from the Seventies shows he retained his old mastery of the medium.

He died in 1989. In the preceding decades he saw new artistic movements such as abstract expressionism, pop art, minimalism and post-modernism arrive and gradually destroy the principles of figurative art, craftsmanship and draughtsmanship that he had lived by as an artist and teacher.

Bawden and many others from that period erected a signpost to the future that accommodated modernism with the past in a stimulating and beautiful way. It was a signpost that was not only ignored but torn down by the abstractionists, postmodernists, pop artists and critical theorists.

As in other areas of cultural and political life, a better, saner future was missed, thousands of careers and a great deal of potential art were destroyed before they were begun, and the publicly-funded elite drove us all down a road of nihilism and charlatanry. I think about that when I see people such as Damien Hirst commanding millions for their work. Among other things, this exhibition shows that Bawden mapped the start of a road that English art never took.

Share
Facebook
Twitter
WhatsApp
Email
Previous articleSaturday essay: Planet Attenborough – too precious to be wasted on children
Next articleChildren’s books and a creeping obsession with race