The BBC’s Age of Climate Denial

I DOUBT if a day goes past now without a blast of global warming propaganda from the BBC.

Isabel Hardman has a new five-part series on Radio 4, called the Age of Denial. Although it covers all forms of denial, it is clearly aimed at climate sceptics, as this opening episode makes obvious:

Hardman interviews Kari Marie Norgaard, a social scientist from Oregon, who has written a book about climate change denial.

You can listen to the first five minutes, but to give the gist, Norgaard visited a small town in western Norway in the winter of 2000/01 to do research for a book she was writing. She found that the winter that year was a mild one, with the snow arriving late.

But what really stunned Norgaard was that none of the locals wanted to talk about ‘climate change’, which she was convinced was to blame.

Hardman and Norgaard then discuss various reasons why this should be so, which amounts to no more than a load of psychobabble.

For some reason, it did not occur to either of them to ask what the locals knew already: that it was just the sort of weather event that they, or their forefathers, had seen in the past.

Indeed, when we check the actual data at Bergen, the longest-running site in the region, we find that those winter temperatures in 2000/01, far from being unusual, were the norm in the 1930s and 40s, and not infrequent at other times either: 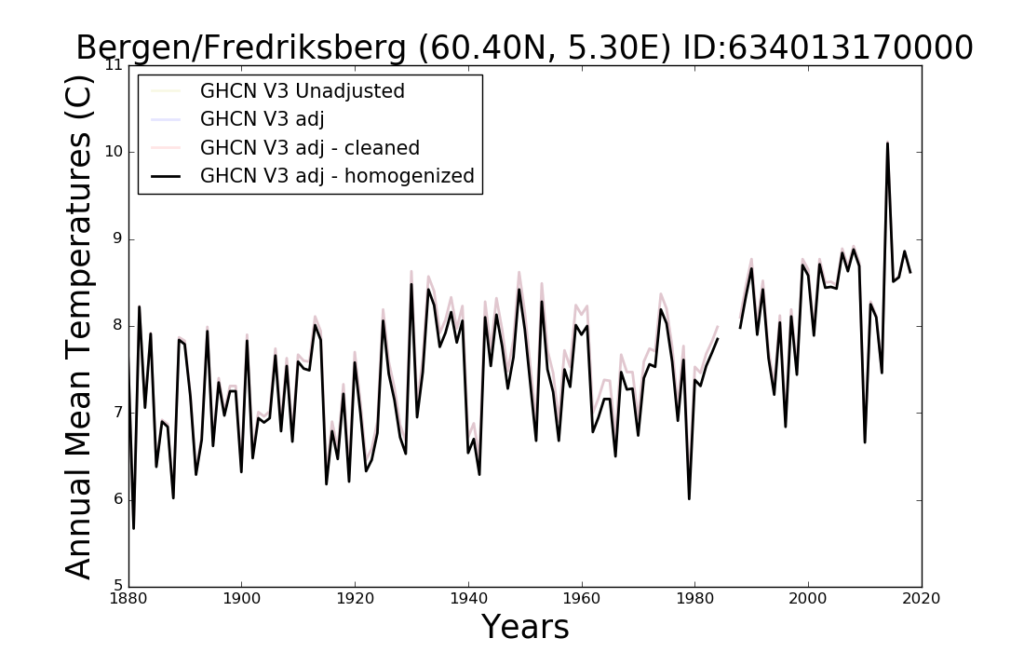 In the remainder of the episode, Hardman discusses various theories from other psychoanalysts. But it is all just a spurious intellectual attempt to create a condition called ‘Denialism’. No doubt so that climate sceptics can be conveniently labelled and then ignored.

In reality, you don’t need to be a psychologist to understand why so many people are suspicious of what they are told about climate change. The answer lies in the fact that they see no evidence on the ground to support the barrage of apocalyptic warnings showered on them.

People who live near the coast can see with their own eyes that they are not about to be inundated by the sea. Temperature rise has been so small in the last century that most people would not even be aware of it if not told. As for extreme weather, older people know that there have always been floods, droughts, heatwaves and storms. Sadly it is the younger generation, who have no such experience, who are vulnerable to propaganda.

In short, people are far more knowledgeable than the sneering Isabel Hardman gives them credit for. And they know when they are being sold a pup.

Moreover, these ordinary people have far more pressing concerns in their daily lives than to be paranoid about climate change. Perhaps if Hardman came out of her metropolitan BBC bubble and talked to ordinary people, she might find this out for herself.

Rather than trying to package sceptics as people with psychological problems, she might ask why others have become totally paranoid about climate change. When I see school kids questioning the point of going to school when ‘their future could be ruined by climate change’, I truly despair.

Are we happy to see them marching around like a bunch of zombies, full of meaningless slogans about topics that they don’t have the slightest understanding about?

It is a sort of mass hysteria that has unfortunately been all too common during human history. It used to be a matter of burning witches, or human sacrifices by the Aztecs. Now it is demonising CO2.

This article was first published in Not Lot of People Know That on March 16, and is republished by kind permission.