The BBC’s Harrabin and a flood of official misinformation 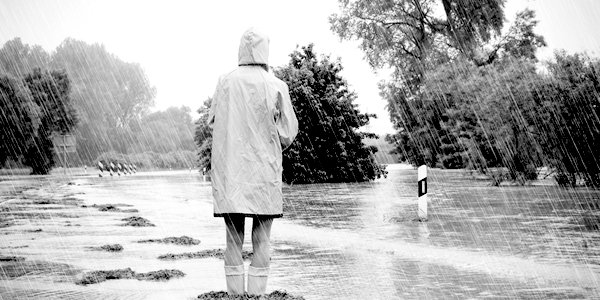 BRITAIN’S flood planners must prepare for the worst on climate change, the Environment Agency has warned. Its chairwoman, Emma Howard Boyd, said on current trends, global temperature could rise between 2C and 4C by 2100 and £1billion a year would need to be spent on flood management. She said some communities may even need to move because of the risk of floods. The government said it would be seeking evidence for its own flood policy in the autumn.

Ms Howard Boyd, launching the consultation on the agency’s flood strategy, said government policy should ensure that all publicly-funded infrastructure is resilient to flooding and coastal change by 2050.

‘We can’t win a war against water by building away climate change with infinitely high flood defences,’ she said.

She called for more to be done to encourage property owners to rebuild homes after flooding in better locations, and with improvements such as raised electrics, hard flooring and flood doors, rather than just ‘recreating what was there before’.

However, she warned that in some places ‘the scale of the threat may be so significant that recovery will not always be the best long-term solution’ and communities would need help to ‘move out of harm’s way’.

It calculates that, for every person who suffers flooding, about 16 more are affected by loss of services such as power, transport and telecommunications.

Ms Howard Boyd warned that climate change and population growth in England meant that properties built in the floodplain will double over the next 50 years.

The agency points towards research from the Cambridge Institute for Sustainability Leadership which suggests that losses on UK mortgages could also double if global temperatures increase by 2C and triple if warming hits 4C.

These would be insurance-related losses related to outcomes of climate change such as more extreme weather.

Ms Howard-Boyd said the government’s six-year flood programme had given flood and coastal protection ‘a shot in the arm’, but she warned that more will be needed.

Environment Minister Therese Coffey said: ‘Flooding and coastal erosion can have terrible consequences for people, businesses and the environment.

But she added that ‘the threat of climate change will mean an increasing risk and preparing the country is a priority for the government, and the nation as a whole’.

In a statement, Friends of the Earth said: ‘Smarter adaptation and resilience building – including natural flood management measures like tree-planting – is undeniably important.

‘But the focus must be first and foremost on slashing emissions so that we can avoid the worst consequences of climate chaos in the first place.

‘With its relentless pursuit of fracking, airport expansion, and road building, and barely tepid support for renewable energy, our government is failing with this regard.’

As usual, the Environment Agency (EA) report is full of fear-mongering and highly speculative projections, which have absolutely no basis in fact.

As for Harrabin, he is quite happy to quote Friends of the Earth propaganda, but is remarkably reluctant to show his readers the actual facts:

Sea levels along the vulnerable east coast have been rising at just 1.89mm a year since the start of the 20th century, with no acceleration. They have barely risen at all this century. Indeed the 50-year trend is running at a much lower rate.

Last year, the Committee on Climate Change published a report pushing the same overhyped alarm. They claimed that 520,000 properties were at risk of coastal flooding.

Or as Harrabin described it: 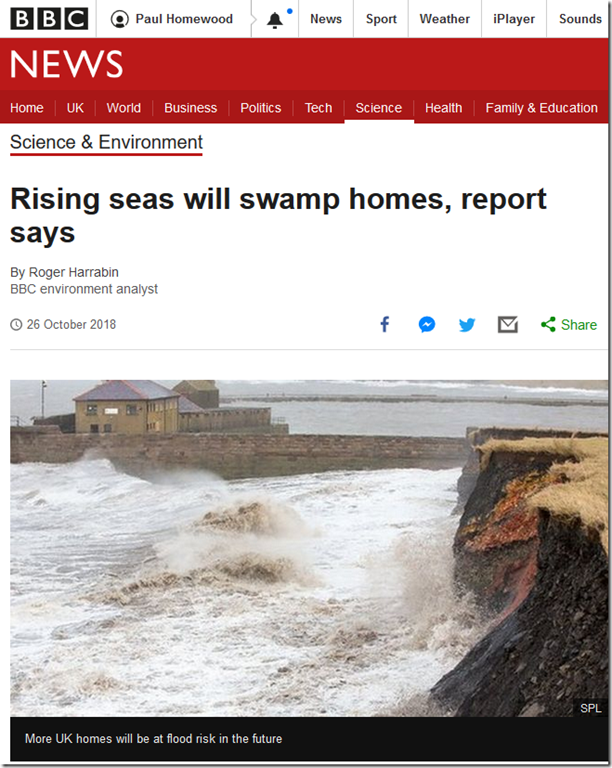 In fact, the number of properties affected by coastal flooding is tiny. For instance, according to the Environment Agency, in 2013, when the worst tidal surge for 60 years hit the east coast, only 1,400 properties were flooded.

Terrible for the inhabitants, and we obviously need to carry on doing all we can to protect homes in flood-prone areas. But the problem hardly warrants the apocalyptic message from the EA.

As for floodplains, perhaps the stupid woman should understand why they are called that!

It is quite disgraceful for Emma Howard Boyd to be pushing this scaremongering on to the public, with the very real damage it can do to coastal communities who may see the value of their properties hit as a result.

This article first appeared in Not a Lot of People Know That on May 9, 2019, and is republished by kind permission.