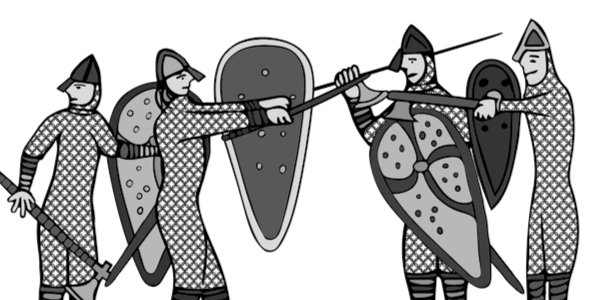 THE story of a teacher who is creating a full-size replica of the Bayeux Tapestry has inspired Boris Johnson to do the same.

He has commissioned a copy of the 224ft medieval masterpiece to replace the controversial £840-a-roll wallpaper in his Downing Street flat.

Rather than wait years for a solo effort to be completed, Johnson has recruited a team of No 10 spin doctors to fast-track the artwork with their skills at embroidery.

Instead of narrating William the Conqueror’s victory over England’s King Harold in 1066, they will chronicle Johnson’s doings since he took over as Prime Minister in July 2019.

The project is hush-hush, but TCW Defending Freedom has had a sneak preview of the tapestry’s pictorial narrative …

Panel 1: After toppling the traitorous Queen Theresa ReMaynder, we see Duke Boris setting out to fight the would-be usurper Corbyn. His queen-to-be, Lady Carrie, gazes in swooning admiration at his bulging manifesto.

Panel 2: At the Battle of Hustings, Duke Boris is depicted squeezing Corbyn in the marginals and sweeping aside the bearded upstart’s vaunted Red Shield Wall. Corbyn falls with an arrow in his eye. Some of his own warriors appear to be holding bows.

Panel 3: Duke Boris, now dubbed the Conqueror, is crowned King at Westminster. He swiftly smites the malign forces of Germania and Gaul and declares England independent.

Panel 4: A mysterious pestilence from Cathay afflicts the realm. King Boris is seen setting his hunting dog Dilyn on false apothecaries who say the disease is no threat. He wisely locks the gentry in their castles and the peasants in their mud huts until the distemper has passed.

Panel 5: King Boris creates a magic potion which cures the pestilence. The tapestry depicts scenes of unbridled rejoicing as grateful peasants kiss the hem of his cloak, children dance round maypoles and bishops offer Masses in his honour. Queen Carrie hangs new drapings on the wall of their chambers in celebration.

Panel 6: A new age of wellbeing and prosperity dawns and Sunak, the Keeper of the King’s Purse, is pictured lost in admiration for the monarch as boxes of gold are conveyed into the Treasury vaults. Under the King’s benign gaze, Dilyn gnaws on the thigh bone of an apothecary.

Last night, one Downing Street insider described the new tapestry as ‘quite a stitch-up’.