The bullied boy who left us crying over spit milk 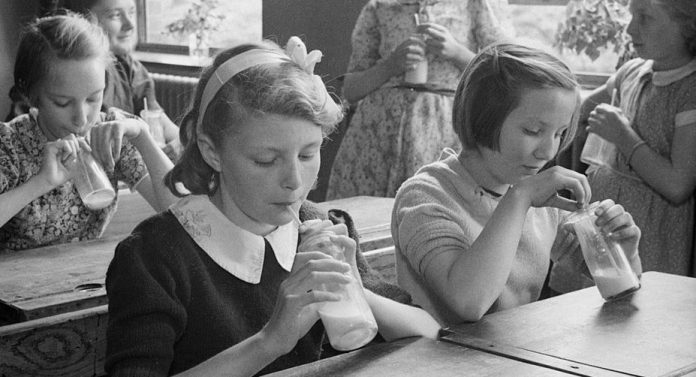 IN my small village junior school in the late 1950s, we used to be given a one-third of a pint bottle of milk in our break at 10am.

The milk was bitingly fresh, sweet and often icy cold. I don’t know how the school managed to do that. I don’t think it possessed a refrigerator, so maybe the milk was delivered direct from the local dairy, or maybe packed with ice, but often the milk was so cold it was painful to drink.

It was proper milk, too. Full cream, with the cream layer floating on the top. None of that homogenised, semi-skimmed muck.

In our school, being selected to be the day’s Milk Monitor was a greedily contested prize. It didn’t entail doing all that much. You simply counted out the number of bottles from the crate to equal the number of pupils in the class; lined the bottles up along the low cupboard at the side of the classroom; and using an ordinary pair of scissors (not sterilised for the purpose!) work your way along the row of bottles, stabbing a hole with the scissors into the silver foil tops and inserting a paper drinking straw taken from a large, dull grey cardboard box with a large, perforated, oval hole on one side, containing 500 straws.

The responsibility of all this for a seven-year-old was a great thrill. It wasn’t too demanding a task, and was difficult to get wrong. And I thought the milk was delicious.

Since it was only a small village surrounded by farmland, there were only about 30 pupils in the whole school. We all knew each other and where everyone lived.

But one day a new boy arrived in the school whose family no one had heard of before. He must have moved in from another village. Somewhere far away, obviously, because he had the most peculiar name: Rudolph.

Rudolph! What sort of funny name to have was that? We boys in the village had proper, normal names like Stephen, or Peter, or Edward.

Rudolph! Wasn’t that the name of a reindeer? How we mocked and picked on Rudolph. He was an odd-looking boy too; not pretty, but rather sickly-looking with a long beaky nose and a pallid complexion. I recall with shame our playground taunts. Children can be cruel. How awful it must have been for poor Rudolph.

Thankfully, the teachers were less unkind, and quickly put a stop to our bullying. And, as a further encouragement, one day – ignoring the usual forest of straining, raised arms in the class – Rudolph was chosen to be Milk Monitor. How appalled we all were. But Rudolph seized the moment eagerly.

He went over to the crate of bottles, counted out the correct number for the class (about a dozen), lined them up on the low cupboard, and then proceeded to work his way along them, stabbing holes in the tops with the scissors, and then expectorating a copious, saliva-brimming spit into the top of each one, transforming each bottle into a chilled cuspidor, before he inserted the straw.

We all watched frozen in horror. That day our milk was being served very cold – and in more ways than one.

I often think of that incident. It took a great deal of courage to do it. There was every chance that Rudolph could have been set upon by the other children in the class; but actually we were all too stunned by what he had done to do anything. Maybe somebody alerted the teacher – I honestly can’t remember what happened next. He must have been reprimanded in some way.

But after the incident, I don’t remember seeing much more of Rudolph at our school. Maybe he was excluded. Or possibly his family moved away?

That would be a distinct possibility, because if Rudolph knew that he was moving away from the village, his last day at school would have been the perfect opportunity to get his revenge – a dish best served cold, as they say.

If you’re reading this now Rudolph P, I’d like to say how sorry I am, and how much I regret the way we treated you. Maybe you still remember the incident? In the large classroom with the clerestory windows high up in the wooden ceiling, and the big, open fireplace by the door?