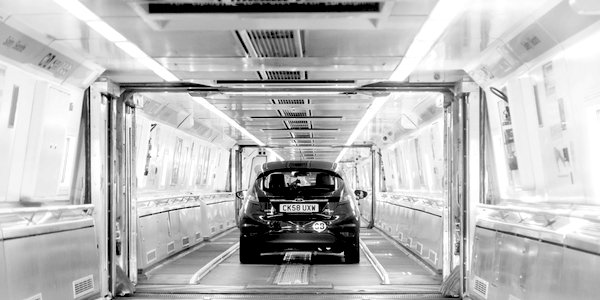 WIELDING a small pneumatic drill, Graham Fagg concentrated intensely on the most momentous task of his life.

Standing 130ft below the English Channel seabed, the 42-year-old engineer carefully burrowed a hole in a chalk marl rockface.

As the gap was widened, light shone through. And there on the other side was the delighted face of Fagg’s 37-year-old French counterpart, Philippe Cozette.

It was 11.21am on December 1, 1990 – 30 years ago next week – and after four years of digging, the British and French sections of the Channel Tunnel had finally been linked. Eight thousand years after the 21-mile stretch of water first separated us, there was once again a walkable route between here and the Continent.

Fagg and Cozette – whose names had been picked at random to perform the breakthrough – shook hands through the gap, exchanged their national flags and posed for pictures.

Then more workers set about enlarging the hole into a doorway so that parties of dignitaries could walk through for the formal ceremonies.

But the two political giants who had created the tunnel were absent. French President Francois Mitterrand was ill. And Margaret Thatcher had formally resigned as Britain’s Prime Minister just three days earlier, after her dramatic downfall at the hands of her own party because of her hardening opposition to further European integration.

Thatcher and Mitterrand had signed the treaty to build the tunnel in February 1986 and on May 6, 1994, the president officially inaugurated it alongside the Queen and Thatcher’s successor, John Major.

And so the idea of the Iron Lady – who had made Europe more physically accessible to us – being ousted because of her opposition to European integration undoubtedly brought a smile to the faces of her many enemies.

But there was to be one final twist to the tale. In June 2016, Graham Fagg took part along with millions of other Britons in the Brexit referendum – and cast his vote to leave the EU, describing it as ‘a very expensive colossus’.

Interviewed last year in his hometown of Dover, he said: ‘I worked on the Channel Tunnel and did the breakthrough, but I actually voted for Brexit. But I don’t see that it’s incompatible.’

In the 1975 referendum on whether Britain should stay in what was then the European Community, he had voted to remain.

‘We voted for a trade deal,’ he said of 1975. ‘I can’t remember anybody ever saying to me, “We’re going to turn it into a federal Europe. We’re going to set all the rules and you’ve got to obey them.”’

However, he is a firm remainer in another sense – in his friendship with Philippe Cozette, who lives in Calais. And both now look on Brexit philosophically.

‘The British made a choice – you have to respect that,’ said the Frenchman. ‘But the links that have been created over centuries between our two countries, and in particular our two regions, because of their proximity but also because of the tunnel, they are very important for me. I think we’ll get used to it.’