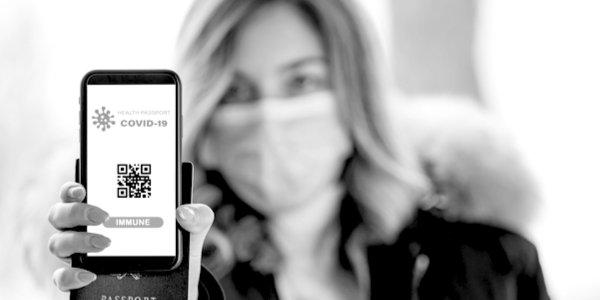 REMEMBER those heady days of 1989, when the Berlin Wall came tumbling down? Eastern Europe was escaping from decades of Soviet totalitarianism and joining the free world, and Germany was reunified. The EU subsequently spread its wings to the borders of Belarus and Ukraine. Europe was not just a continent but a construct of progressive values: liberty, tolerance, equality and diversity. A key principle was freedom of movement. So, where are we now?

A new Iron Curtain has been built in Europe. Like the original version dividing east and west, the barrier is more to stop people getting out than to stop outsiders getting in. The manipulated Covid-19 pandemic has licensed draconian discipline on citizens in the name of public health. Anyone failing to comply with infection controls, including repeated doses of vaccination, can be denied entry or exit.

Recently the European Parliament voted by 453 to 119 to extend the digital Covid Pass for another 12 months (as many of us learned in the UK referendum on EU membership, elected members in Brussels cannot propose laws, but only approve or reject those presented by the unelected commission). In a public survey before the vote, 99 per cent of the 385,191 responses opposed renewal, but their overwhelming plea was ignored.

To hop on a plane you need to have had a booster, or have received the second of the initial double jabs less than 270 days ago. Recovery from Covid-19 is also accepted through PCR proof of infection, but that is limited to 180 days. This development was not covered in our mainstream media, despite the obvious impact on British travellers.

‘The pandemic is not over,’ declared Juan Fernando López Aguilar, president of the European Parliament’s Civil Liberties Committee, to justify his support for further restriction. Anyone who thought that ‘living with Covid’ meant going back to normal should have learned by now that the authorities want it to stay for ever. We will be held hostage by the viral regime for the foreseeable future: Covid-19 will be lodged in our lives, till death do us part.

Fear is being ramped up again in the media. Portugal reported a surge in May, and Scandinavian countries warned that social gatherings during the long summer days would cause an escalation in cases. Tighter restrictions are inevitable, and booked family holidays are imperilled. In Britain, after months of respite, the numbers are rising again. Covid zealots are clamouring for mask mandates, free testing and fourth or fifth jabs to quell the contagion and save the NHS.

Extension of the Covid Pass effectively erects a wall around the EU. In Orwellian double-speak, the European Parliament talked of its necessity to keep borders open, but it imprisons citizens who refuse the genetic engineering injections. Britons ditto are in effect trapped on their sceptred isle. Punishment for Brexit, you might think. Boris Johnson, bête noire of Remain diehards, is closer to their cause than they think. Has any leader betrayed voters as much as this current prime minister? Johnson, having mooted the idea of a two-tier EU, approves of the Covid Pass and is sure to sign us up to a European health identity system controlled by Brussels. These days, freedom of movement is reserved for the hordes illegally crossing the English Channel.

Inveterate Remainers continue to promote the EU for its progressive values, overlooking (or even supporting) the mandatory vaccination tyranny in Germany and Austria, and the widespread apartheid across member states (President Macron announced that the unvaccinated were not part of French society). And while transparency was never a strong point in Brussels, how does the behaviour of European Commission president Ursula von der Leyen adhere to any values of public office when she refuses to disclose her text messages with Pfizer CEO Albert Bourla on a mammoth vaccine contract?

Freedom fighters in Britain and Europe realise that the contrived Covid-19 crisis of the last two years is only the thin end of the wedge. The Great Reset masterplan is becoming clearer: a continental structure of digital surveillance, akin to the controls imposed by the Chinese Communist Party with its social credit system. Eventually this will be a global matrix, as the technocratic new world order advances by stealth, hoodwinking the majority into believing that all the radical interventions are for public health.

Civil disobedience is a necessary but limited strategy. You are powerless at the airport customs desk. I have not renewed my passport, and while that is futile as an act of resistance, at least I won’t be visiting any countries that impose pseudo-medical tyranny. Except my own, of course.