The cruel reality of online ‘school’ in a 12th floor flat 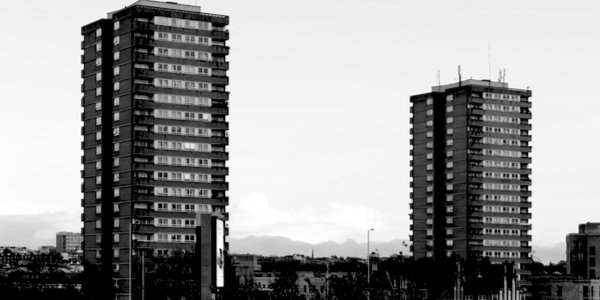 ‘Simon’s story’ – a day in the life of online schooling – was sent to TCW by a friend of a child struggling to cope. Offering his help, he witnessed just one day of the stress, distress and unintentional mistreatment that many more children around the country are enduring weeks on end. He was shocked into writing this fly-on-the-wall report of what he described to us as a cruel travesty of education and learning.

NINE-year-old Simon gets out of bed. Still in his pyjamas, he takes two steps over to the desk in the corner of his cramped bedroom and turns on his computer. After watching a couple of YouTube videos – pranks by Logan Paul, Twitch streams of Fortnite – at 8am, he logs in to Microsoft Teams.

‘Here, Miss’. On the group chat on the right hand side of the screen, about half of the 20 other children in his class have already logged in. Several take another ten minutes to do so. Some will have technical problems with their computers and have trouble logging in. Some will never log in at all.

After this online ‘roll call’ time lost, class finally starts. First up, science. Via Microsoft Teams, Simon is sent an assignment to download. During the next thirty minutes, he will have to answer a multiple-choice test. There is no video link. Simon cannot see his teacher. The teacher cannot see Simon. Their only means of communicating is through the group chat.

Simon is confused by a question about plant cells. He types: ‘Please, miss, I don’t get it.’ Sometimes the teacher is able to respond. Sometimes she is struggling with technical problems herself. If Simon doesn’t know the answer, or he doesn’t understand, the teacher cannot speak to him directly to explain things to him. So normally he guesses. Sometimes it’s easier just to leave it and not answer at all. Which is what he mainly does.

Simon has anxiety issues and finds it embarrassing to have to admit on the group chat, in full view of the rest of the class, that he doesn’t understand. After half an hour, the test finishes; Simon has managed to answer four of the 20 questions. The other 16 he’s left blank.

The teacher does not go through the test with Simon individually. She does not go through it with the class as a group. Next week, Simon might find out how he did in the test. By which point, he’s either forgotten about it – he is nine years old – or had to move on to a new assignment. Simon types ‘Bye, Miss’ on the group chat, to prove his attendance, and the class ends.

A ten-minute break. Simon sits in front of his computer, watching clips from the Premier League. Next class: geography. ‘Here, Miss’. Ten minutes later, about 15 of the 20 children have managed to log in. After waiting, with no response, for the remaining five, the teacher decides to start class without them.

The teacher goes through a slideshow. But neither Simon nor any of his ‘classmates’ are able to see her shared screen. After a long delay, the teacher manages to get her slideshow on the Microsoft Teams window, so everyone who is logged in can see. Simon stares at a diagram of the Earth: crust, mantle, outer core, inner core. Written under the English text, phonetic Arabic in Roman letters for the two children from Syria and one from Iraq in his class who do not speak any English. Simon does not know what it is or why it is there.

The teacher asks the children to identify the parts of the Earth. On the count of 5, they must type in their answers on the group chat. Simon waits until a few children have entered their answers, then he copies what they wrote. As most do.

Despite this, several children still give the wrong answers. Comments in the group chat read ‘miss wot is this’ and ‘miss i dont now’. One child in the group writes ‘PLZ I DONT LIKE THIS’ over and over again throughout the lesson.

The teacher asks if anyone needs things explained. She will try to do a direct call to speak to them over Microsoft Teams, she says. Simon, confused by the diagram, types: ‘Please me Miss’. More than half the class type the same request. Ten children are confused and need her help, but she has time to talk to only one of them. Simon, with the rest of the children, is put on mute, and the lesson is paused, as they wait for the unseen teacher to speak to the unseen child. He stops paying attention.

Simon’s dog, Cassie, comes into the room. Cassie is a one-year-old mongrel, and is the single best thing in Simon’s life right now. Cassie is very sweet. He is also a constant source of distraction. Simon has problems concentrating and does not need distractions. He’s been diagnosed with ADHD. Keeping focus is hard enough at normal school. But sitting at his computer in his bedroom from 8am till 4pm, with the internet just one mouse-click away, it’s impossible. His mother has tried to block access to other websites. Simon has found a way around it. Again.

The teacher returns to the class. But after all the delays, they’ve run out of time. ‘Bye, Miss’, Simon types. It is now 11.30. Simon has two more lessons left today.

After lunch – a sandwich brought into his bedroom by his mum, which he eats alone in front of the computer – it is PE. Simon used to love PE lessons. Sometimes they would run around the local astroturf. Sometimes they would go swimming. Now, he is sent a video of basic star-jumps, which he tries to copy, alone in his room, in the small space not occupied by his bed and furniture. After PE, it is drama. Drama has always been Simon’s favourite class. He loved doing acting exercises with his friends. Now he is sent video clips of scenes from plays from the National Theatre. He doesn’t understand the plays, and no one is there to explain them to him. He finds them boring. So he clicks on to YouTube and watches funny videos instead.

Simon lives on the 12th floor of a council tower block in a small two-bedroom flat with his mother. She is from Portugal and struggles with her English. She is a single parent who works as a freelance cleaner. She has not been able to work for more than five weeks now because she has to stay at home to supervise her son’s home-schooling. She hasn’t had a formal education. She has no partner and no other family to assist her with Simon’s lessons. With her poor English, she finds it hard to help him with his assignments. She is not computer literate. She doesn’t understand what Microsoft Teams is, or how the online class is supposed to work.

Simon’s performance in school, already below average, is now worse. His mother knows that he is being left behind. She writes emails to the school. Leaves messages with the teachers. But there are hundreds of other children who are struggling and the staff are overwhelmed. No one seems able to help Simon. His mother worries that, if or when the pandemic ends and things ‘return to normal’, he will never be able to catch up on what he’s missed, and that these months of lost learning will severely harm his chances at 13+, GCSE, A-level and beyond. More than his education, she fears for his mental health, that the damage being done to his development may be irreparable. Simon has not seen another child since December. No football. No playground. No after-school clubs. No going over to a friend’s house for tea. If it weren’t for Cassie, he’d spend every single hour of the day alone, staring at a screen.

On Wednesday, on Radio 4, Matt Hancock said, ‘I understand the impact of closing schools on children and children’s education.’

I wonder if his children – or those of his fellow Cabinet members, or the members of Sage, or the executives at the Times or the BBC – are having the same experience of ‘homeschool’ as Simon’s, or whether they have any idea at all.