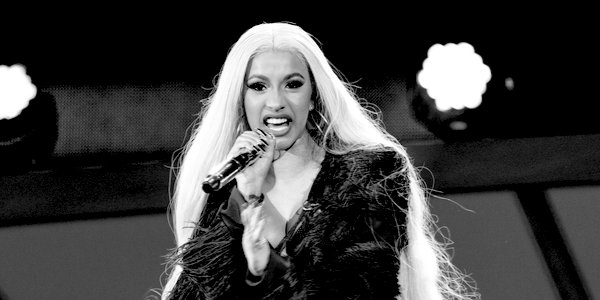 REGULAR readers of The Conservative Woman may have read how my restaurant dinner a few weeks ago was ruined by an endless parade of rap videos blazing on a TV screen just in my line of sight.

Little did I realise in those innocent days, however, that what I was seeing on the screen was like a half of shandy compared with some of the other industrial-strength content out there. This stuff wouldn’t merely spoil your appetite; you’d find the contents of your stomach all over the table.

No, this is not the trendy name of Rome’s hippest cardinal. This is the stage name of Belcalis Marlenis Almánzar, whom Wikipedia describes as a ‘rapper, songwriter and actress’.

I claim no expertise in the first of these three so I pass no judgment on her rapping. I can call into question her acting prowess. On her aforementioned Wiki page under ‘Filmography’ are listed nine different programmes or shows, of which in eight she plays ‘Herself’. An Oscar surely awaits.

As songwriters go, however, she displays a discernible talent. Her greatest hit is a ditty called ‘WAP’. This acronym, if you really must know, stands for ‘wet-ass p***y’ (no, not ‘puppy’, ‘piggy’, or even ‘pygmy’). For the purposes of this article, we will, however, substitute the crude reference to Cardi B’s genitalia with ‘pasty’ – with no offence intended to any Cornish readers.

Since its release seven months ago, the various versions of Wet-ass Pasty have achieved a total of 687million views on YouTube alone. A new lease of life was given to the song last week when it was performed at the Grammys. In two days, the video of this performance had almost 6million views (currently only those within the United States are able to watch it, the rest of the world protected for the time being).

For the uninitiated – and if you form part of this group I heartily recommend you remain so – the song revolves the self-proclaimed waterlogged state of Cardi B’s nether regions. Any potential suitor is recommended to be equipped with ‘a bucket and a mop’ to cope with the inundation.

Most of the song is utterly unquotable in its original and my stomach is too weak to read the lyrics more than once. It is, nevertheless, a veritable cacophony of body parts, vivid descriptions of sexual congress and recommendations of how to purchase access to Cardi B’s sodden districts:

Now make it rain if you wanna / See some wet-ass [pasty] (yeah, yeah)

(If you do want to become more familiar with the song’s lyrics, Ben Shapiro’s analysis is worth a watch.)

The Grammys version took it all up a notch, with the slightly overweight Cardi B shaking her posterior in different locations and simultaneously stimulating the demand for buckets across the nation.

Perhaps she’s on commission from a bucket manufacturer?

Laden down with attire vaguely reminiscent of a cross between the Jetsons and a medieval knight, our Cardi eventually ends up on an oversized bed, rolling around like a well-oiled pig, unable to right herself. Her uncontrolled gyrations and flailing legs undoubtedly make this all the more challenging. As this is going on, a woman dances (I use the term roughly) inside a giant high-heeled shoe, money flying all around her.

If this is what empowerment looks like, I would hate to see some objectification!

But still, who cares, right? Let Cardi B sing from the rooftops about her stomach-churning gynaecological issues, if she pleases. After all, it is – or rather, was – a free country (maan).

Nevertheless, the modern western world has elevated the body and its reproductive function to the centre of our culture. Perhaps it started with the Beatles and their desire to hold a girl’s hand: should have nipped it in the bud then. In the course of time, a constantly aroused false idol has been installed as a modern god. It’s enough to make one sympathise with the radical Islamists screaming about Western degeneracy before they self-detonate.

Thankfully, due to Cardi B’s advice we’ll be sure to have plenty of buckets and mops to hand to clean up the mess.

We live in a very confused age: one in which reality is readily denied and where cause and effect are entirely disassociated. Simultaneously, biological sex is claimed to have no basis in fact, but concerns about relations between the sexes is at an all-time high. Race is claimed to be biologically baseless (or has this changed?) yet it is held up as our defining characteristic.

It is an age where sex is treated as any other bodily function: one without any moral implications whatsoever. At the same time, concerns about sexual harassment and ‘consent’ are never-ending topics of discussion. If sex is amoral, how can you have a #MeToo movement? According to their own logic, it would be treated as any other kind of assault or crime. As ever, progressive thinking ties itself in contradictory knots in an attempt to force through its ideological goals.

Girls are encouraged to empower themselves by starting an OnlyFans page – a site where they can flog nudes of themselves to dopes stupid enough to pay them – thereby signalling that their value lies only in their sexual marketability. Sexual degradation is dressed up in the garb of independence, with each seedy act sold and distributed on the internet claimed to be no different to any other kind of work. We have arrived at a point where even universities are encouraging their students to become ‘sex workers’, with the University of Leicester recently publishing its ‘sex worker toolkit‘.

This normalisation of seeing women and girls as just objects – Cardi B reduced to her medically worrying pasties, girls selling themselves on-and off-line – which can be bought with the requisite amount of money or buckets has real-world implications.

Indeed, it is the reduction of women to mere objects that reduces to them to the conditions seen in other cultures. Across parts of the world, women are often merely targets of lust, hence their necessary covering in public. They offer no other value other than the fulfilment of a man’s basest instinct.

Feminists claim to want a culture that respects women. How is that possible, if we so readily promote women who clearly don’t respect themselves, happy to reduce themselves to objects of the fulfilment of sexual desire and little else?

In an era of moral panic surrounding the threat to women in society, we would do well to discourage the degrading trend of telling girls that their value lies only in what lies between their legs and on their chests.

This is because when we tell our girls that, our men and boys are listening too.