The down-at-heel shoe town: Elegy for my poor old Northampton 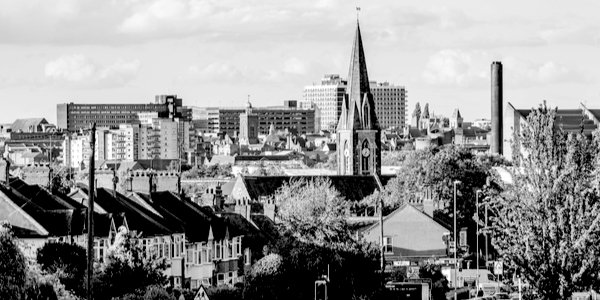 A FEW weeks ago I had to go to London to sort out some things. I wasn’t able to convince anyone to give me a lift to the station. Never mind.

Although it takes the best part of an hour to walk to there from home, it was a pleasant day – one of the last hurrahs of summer. Anyway, I could do with the walk after lockdown has turned me into a more sedentary beast, slowly pickling myself with alcohol.

I set off. Northampton is one of those towns that many have heard of, but aren’t entirely sure where it is. This is hardly surprising, as there is little to recommend the place.

My father used to like to tell visitors how it was ‘the most average town in the country’, leading to it being the test location for various schemes. I don’t know whether this is true or not, but it seems distinctly plausible. At any rate, nobody ever tried to dispute the town’s above-average averageness.

My journey starts off amid rows of Victorian terraces, largely built in Northampton’s heyday as a boot and shoe-making town. There are still some high-end shoe manufacturers here, but the majority of the factories that once employed the people living along these redbricked streets have long since relocated to more exotic locations. There are still traces of this heritage, with the town’s football club unfortunately – if not aptly – nicknamed ‘the Cobblers’.

I gradually make my way to one of the main roads. I doubt that Wellingborough Road, a major east-west thoroughfare, ever had much to commend it. If it ever did, it certainly doesn’t now. A peculiar hodge-podge of working-class pubs, barbers, kebab shops, Afro-Caribbean supermarkets, Vietnamese-run nail bars and Polski skleps, a walk down the road is a veritable stroll through the multikulti that has been established throughout most English towns.

Past a few more shops – Kaka Stores, Bar Serengeti, Transylvanya Northampton, Tommys Nails – and I reach the statue of Sir Charles Bradlaugh, one-time Liberal MP for Northampton. To my surprise, the homeless that I recall having always loitered around his statue and the nearby war memorial are no longer there. For a town in which a general sense of decline pervades, it is a rare sign of improvement.

I eventually get to Abington Street. It was once the commercial heart of the town. It is now, however, a street best avoided if at all possible. The shopping isn’t what it was – many of the shops are shuttered. The now ubiquitous nail bars survive, of course.

Over recent years, in various attempts to revitalise its fortunes, the council has pedestrianised and subsequent de-pedestrianised various stretches of the street. With such pointless spending of public money, it is little wonder Northampton Borough Council eventually became, in the words of the local paper, ‘infamously bankrupt’.

Falling victim to town planners in the post-war years, Abington Street presents a strange combination of architectural styles. The town’s library survives as an ornate relic of a bygone era, in which buildings were constructed with beauty as a foremost consideration.

It was once one of many buildings on the street that echoed these sentiments. The New Theatre, a beautiful Italian Renaissance style building which opened in 1912, was flattened a few decades later in 1960, making way for a brutalist retail unit now occupied by Primark.

I walk past the market, which has been trading on the same spot since 1235. A giant multi-storey 1970s car park now looms over its northern edge. Despite the best efforts of post-war planners, however, the town is still endowed with some architectural beauty.

The Northampton War Memorial, designed by Sir Edwin Lutyens and built in 1926, sits adjacent to the market square. The intricacy of the memorial’s stonework always astounded me: It was only when I reached my late teens did I realise that the exquisite draped flags were not, in fact, made of cloth, but of carved stone.

Today, with the town centre largely void of ordinary people going about their business (most avoid it like the plague), the memorial is surrounded by benches, occupied by the homeless and daytime drinkers. A nearby taxi rank is manned by taxi drivers even more diverse than the shops on the Wellingborough Road.

In this part of the town, keeping one’s eyes resolutely above ground level can give the illusion of being somewhere nicer than you actually are. Many of the buildings here date from just after the 1675 Fire of Northampton, which destroyed three-quarters of the town.

All Saints Church – built in the style of Christopher Wren’s London churches of the same period – was opened in 1680. Its congregation has dwindled. Even the Christmas service I attended there a few years ago was unable to fill the pews.

The church is now instead visited by the less religiously-inclined. As I stroll past at about eleven in the morning, a gang of 15 or so busy themselves smoking, drinking cheap lager and shouting at each other underneath the church’s portico. Loud rap music blares away in the background, complementing this urban scene and contrastingly awkwardly with a statue of Charles II, who casts an eye over proceedings.

It’s around about now – sensing some menace in the air – that I take my headphones off in order to be more aware of my surroundings. Perhaps I’m being overly dramatic. Perhaps not: A few days later a teenager is stabbed in broad daylight in the McDonald’s 50 or so yards from here.

‘I don’t remember it being this bad,’ I think to myself, turning on to Gold Street. Northampton was never particularly nice, as far as I recall. I certainly don’t view the place through rose-coloured spectacles. But I don’t recall it being quite like this.

Gold Street is home to a great number of discount shops and fast food restaurants. Supposedly it was given its name due to the presence of Northampton’s Jewish community, driven out of the town in 1277.

Unaware of this fact, most today must assume the name to be ironic – a far baser metal would be more appropriate. At the end of the street stands a vast and mostly empty leisure complex, whose roof blew off earlier this year.

While Sol Central is more attractive than the 1960s brutalist office block that used to occupy the same plot, one can only imagine that something more architecturally worthy once stood there.

Still, amongst this sea of ugliness stands a gem from a different time: Hazelrigg House is a late-Tudor relic, a survivor from the town’s aforementioned 1675 fire. Local legend maintains that Oliver Cromwell stayed in the house on his way to the Battle of Naseby in 1645.

The station is visible just down the road now. Until 1966 it was known as Northampton Castle, as it stands on the spot of a castle which was torn down after the Restoration due to the town’s Parliamentary sympathies. Perhaps we shouldn’t have so generously given Cromwell  accommodation after all.

The station has been recently rebuilt in the ‘big-glass-modern’ style. While I’m not a fan, it is admittedly an improvement on the 1960s attempt at providing the town with a new station, which bore a striking resemblance to a cattle shed.

Ever a town of contrasts, there is one last surprise before reaching the station. St Peter’s Church stands incongruously amidst its current surroundings – hemmed in between a roundabout, council flats, a long-closed pub and Sol Central.

This now-deconsecrated church is described by some as the most outstanding example of a Norman church in the country. It is, of course, now closed, as attempts are made to make the church ‘Covid secure’. With no chance of looking inside, I carry on, soon arriving at the thoroughly ‘Covid secure’ station.

I always envied people who have a sense of pride or fondness for where they grew up. I can’t say my walk through Northampton has sparked any affection for my home town.

I can’t shake the feeling that we are merely living in the shadow of greater things, like the barbarian living among the ruins of a Roman city. If my father is indeed right that Northampton is the most average town there is, then I fear we are in a great deal of trouble.