The evil of three little words 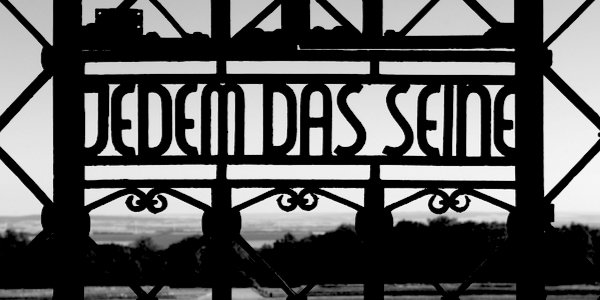 THREE and a half miles to the north west of the lovely German town of Weimar stands Ettersburg Hill. In 1937 a concentration camp was built there. Carved into the wooden beam spanning the entrance portal, in red capital letters, ran the inscription ‘RECHT ODER UNRECHT – MEIN VATERLAND.’ Right or wrong – my Fatherland. Below this, incorporated into the wrought iron gates, were the words ‘JEDEM DAS SEINE.’

These words are a translation of the Latin words Suum Cuique, which are part of the longer phrase ‘Justitia suum cuique distribuit’: justice renders to everyone his due (Cicero.) This refers to the ancient principle of universal justice. The frugal German translation says: jedem (everyone, in dative case); das (the, neuter definite article); Seine (his, third person possessive pronoun.) To everyone the his. It means: ‘to everyone that which is his’, and more colloquially ‘to each his own’ or, more ominously, ‘everyone gets what he deserves’.

This motto was designed and installed by the Bauhaus artist Franz Ehrlich, a communist incarcerated in the camp. The sign is forged in the clean, elegant lines of the Bauhaus font (shown at the end of this article).

The phrase was set in the gates back to front, readable only from inside the camp. An ironic touch.

For the more than a quarter of a million human beings who passed through these gates, the words Jedem Das Seine could be interpreted in many different ways. Was it a dictum, a philosophy, a challenge, a comfort? Of course we all know now that it was a sarcastic taunt. Even the name of the camp, Buchenwald, Beech Wood, was a cynical disguise.

The commandant in charge of Buchenwald was Karl Otto Koch. It was on his orders that these words should be used on the gates, and not the more usual ‘Arbeit Macht Frei’ (work makes you free) which was the maxim displayed on the gates of Auschwitz, Dachau, Sachsenhausen and Theresienstadt concentration camps. ‘Work Makes You Free’ seems a reasonable motto to adorn a work camp, in rather the same way that ‘Our True Intent Is All For Your Delight’ adorned Billy Butlin’s first holiday camp in Skegness. I may be pushing the analogy a bit too far, but I trust you get the point.

One of the methods of winnowing camp inmates, without blatantly murdering them, was ‘Vernichtung durch Arbeit’, extermination through work; a sister phrase, so to speak, of Arbeit macht frei. But then Vernichtung macht frei as well if you think about it: Lebenfrei, if I may be permitted an epithet of my own. So the Nazis weren’t actually lying with these pithy idioms, merely being cryptic.

What does this penchant for ironic three-word aphorisms tell us about the mindset of Herr Koch and his chums?

The Nazi ideology was one of racial hierarchy. The theory had it that there was a superior Aryan race, comprising the Nordic and North European peoples. This elite was termed the Übermensch. Blond (ideally), blue-eyed, athletic, intelligent and tall. Adolf Hitler awarded German mothers who conceived and raised four or more children the ‘Ehrenkreuz der Deutschen Mutter’ (Cross of Honour of the German Mother.)

At the other end of the scale were the non-Aryan, racial inferiors, the Untermenschen. Short, dark-skinned and primitive. This way of thinking found its origins in the 1883 work of Friedrich Nietzsche Also Sprach Zarathustra, although Nietzsche, who died in 1900 (in Weimar, funnily enough) never foresaw the Nazi misappropriation and distortion of his philosophy.

The term Aryan was difficult to define precisely, and the Nazis stopped using the word after the passing of the Nuremberg race laws in 1935, replacing the word with the more elastic phrase ‘those of German or related blood’.

It’s all nonsense, of course, but na bitte! There you go.

If you are to have an Übermensch then you need to let the Untermenschen know that they are the Untermenschen. Until now they might have been thinking that they were as good as anybody else. They will not come to the conclusion that they are inferior of their own accord. The fact of their Untermenschen-ness needs to be impressed upon them. That is the function of the slogans adorning the concentration camps. They are not exhortations which encourage and welcome. They are there to humiliate and demoralise. The cruel irony is not accidental. It is deliberate, providing a sordid facade of legitimacy to the monstrous process it conceals.

Was Herr Koch insane or merely wicked? Perhaps he was neither. If you intend to subsume yourself into a larger, all-encompassing ideology or entity, you first have to relinquish your autonomy. You must do no thinking for yourself, however clever or silly you happen to be. Your thinking will be done for you. Everything will be cut and dried. You need only do as you’re told; fit in; go along with everything; obey. You become a cog in a machine. You will also be able to shed all responsibility. A cog in a machine isn’t responsible for anything. It just has to mesh with its adjacent cogs and rotate in the required direction. Slightly hot and frantic when the pressure’s on, but cool and easy when business is slack. Life is constrained but secure for an undemanding, unquestioning cog.

Ganz bestimmt nicht! Don’t be so sure.

The Nazis themselves didn’t think too highly of Karl Otto Koch. He was an embezzler and mass murderer, and just one week before the Buchenwald Camp was liberated in April 1945, he was convicted of bringing disgrace upon the SS. He was taken from his prison cell in Weimar to Buchenwald and executed by firing squad. His body was burned in the camp’s crematorium.

If that isn’t ironic with a capital Bauhaus I, I don’t know what is.

A cog has no control over its destiny. That is the price one must pay if one chooses to become a cog. You’ll be all right and looked after just as long as you fit in and operate correctly. But should you become surplus to requirements, well . . . Jedem das Seine.

You can view the entrance portal to Buchenwald here.

You can brush up on your Übermensch here.