The forgotten war against Turkey 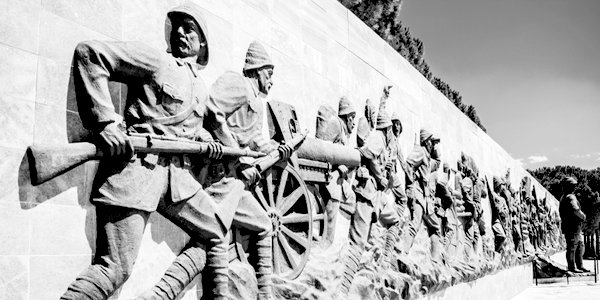 To most people today, the First World War means the great battles of the Western Front, where our soldiers spent four years in horrific trench warfare in the mud of France and Belgium. Much else of the war, though, is barely remembered or known, such as the fights of our Russian, Serbian or Italian allies, or the other campaigns involving British troops in Italy, Salonica, East and Southern Africa. There was also our struggle against the Turks and their sprawling, half-decayed Ottoman Empire, almost a full-scale war in its own right.

Except for the bloody campaign of Gallipoli and the desert fighting of the Arab rebellion, romanticised by the 1962 film Lawrence of Arabia, this is almost forgotten. But it shouldn’t be. It was a significant part of the Great War and was no sideshow. Fighting took place over a huge area, including the territories of modern-day Jordan, Israel, Iraq, Iran, Syria, Egypt, Lebanon and Saudi Arabia, and at both ends of Turkey, on its western edge with Europe and in the north-east on the Caucasian frontier, where the Russians fought the Turks in separate campaigns.

Huge numbers of British and Allied troops took part. There were Anzacs (Australian and New Zealand Army Corps), Indians in hundreds of thousands, Arabs, Persians and French troops, both from metropolitan France and its North African colonies. Muslims made up a significant part of our forces, despite Turkish claims that as the inheritors of the Islamic Caliphate they were fighting a holy jihad against the westerners.

Although most of our clashes with Turkey were relatively small compared with those in France or Flanders, they were still hard-fought: Kut, Ctesiphon, Beersheba, Baghdad and many others. And as dreadful as anything on the Western Front were the battles in the Gallipoli campaign where the Allies attempted to force open the entrance to the Black Sea and knock Turkey out of the war.

The operation was a tragic failure, costing the Allies a huge toll in casualties. The conditions and privations were as harsh as our troops endured anywhere and sometimes the courage shown was almost unimaginable. In the initial assault, one unit, the 1st Battalion Lancashire Fusiliers, won six Victoria Crosses ‘before breakfast’.

The Anzacs made a huge contribution of their own to the campaign. The losses sustained were seen in both Australia and New Zealand as national tragedies. The story of Gallipoli took on great significance in the formation of their emerging identities as separate countries from the old homeland of Britain. But all the participants suffered dreadfully. In one short afternoon, in an unsuccessful attack in the hills around Tekke Tep, the 1st Royal Munster Fusiliers lost three hundred men out of a total strength of seven hundred. Many battalions had similar losses.

Behind the war’s front lines, the Turks often acted barbarously. There was the genocide of the Armenians, something Turkey still denies even today despite its recognition as a historical fact by numerous governments and international bodies. The Turks considered the Armenians to be a potential fifth column for their Russian enemies: they had to be destroyed. There are no exact agreed figures, but it is probable that out of a population of 1.5million, 1.2million were murdered.

And there were atrocities against Turkey’s other minorities, Assyrians, Greeks and various scattered communities of Christians. Rape, mass-murder, forced marches in excessive heat and deliberate starvation were all used. Allied prisoners-of-war in Turkish custody often fared little better. One example is the capture of just over two and a half thousand British troops in April 1916 by the Turks at Kut in modern Iraq. By the war’s end, 65 per cent had died in captivity from cruelty and neglect.

After the Allied defeat at Gallipoli, the fighting continued in Mesopotamia and Sinai and the southern edge of Palestine. The Allies were desperate to keep the Turks away from the Suez Canal, the possession of which was essential for Britain’s war effort. After much struggle, by the summer of 1918, the war was starting to go in the Allies’ favour. Under the command of General Edmund Allenby, British and Empire forces pushed up into Palestine, capturing Jerusalem and inflicting a major defeat on the Turks at Meggido.

On 1 October 1918, Damascus was reached. T E Lawrence, or Lawrence of Arabia as he’s since been immortalised, claimed to be first into the city, liberating it on behalf of his irregular Arab forces. The Australians dispute this, making the less romantic claim that one of their officers, a dentist from Ballarat, took the honour.

The Allied victory didn’t bring stability, long-term peace or justice for all of the region’s nationalities, but that would have been too much to ask for. Our troops, though, together with Empire forces and our allies, still achieved much and made a significant contribution to the wider war.

They blocked the potential for the Central Powers to carry the war to new theatres and kept open the essential Suez Canal. Their defence of vital Anglo-Persian oil resources was equally important. And they contained and then knocked out the centuries-old Ottoman Empire, a key strategic ally of Germany.

While it is understandable that the battles in France and Flanders, which were so much closer and took away so many more of our men, are more prominent in our memories, we should not forget the sacrifices and struggles of any of our forces, wherever they fought.