The funeral of our craven, spineless media 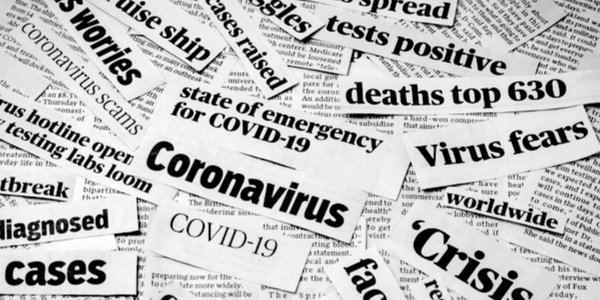 IN THE unlikely event that Britain ever slid towards tyranny, I used to imagine, our greatest bulwark would be our frank and fearless press.

Sure, there’d be some media organisations – the BBC and Channel 4 obviously, the ultramontane Financial Times and the slithy Guardian probably, the Ecommunist definitely – which would quickly find an accommodation with our new totalitarian overlords. But not those voices of the shires or the workers: not the Daily Telegraph, not the Daily Mail and most definitely not the super soaraway Sun.

How wrong can you be? It’s not just every single newspaper and TV news station, right and left, that has betrayed us. But also pretty much every single commentator, including those whose stock in trade was (supposedly) telling it like it is without fear or favour.

Almost to a man and woman they’ve either surrendered after some token resistance or been totally useless throughout. Masked, cowed, compliant, Britain is a pale shadow of what it was just 18 months ago. ‘That England that was wont to conquer others/Hath made a fatal conquest of itself.’ Lots of people are to blame for this wholly avoidable disaster. But definitely among the worst offenders in that rogues’ gallery of shame is our craven, spavined and spineless media.

The first inexcusable thing our media did was to blow the ‘pandemic’ (itself a misnomer) completely out of proportion. While it’s true that in the early months of last year there was a lot of misinformation around, much of it fomented by the Chinese Communist Party’s efficient propagandists, there was plenty of evidence to contradict the official narrative that this was Britain’s biggest crisis since the Second World War. Stanford epidemiologist John Ioannidis, for example, inferred early on using data from the Diamond Princess cruise liner that Covid was in fact no more virulent than a fairly bad flu. But little was made of this, the media preferring to regurgitate scare fiction such as Professor Neil Ferguson’s notorious Imperial College computer models projecting up to 500,000 deaths.

‘If it bleeds, it leads’: we can all understand that tendency, especially among the tabloids. But besides generating hysteria, our media has traditionally been equally keen to generate scoops, to speak truth to power, and to conduct proper investigative journalism. Not since early 2020, though, it hasn’t. Rather, it has largely assumed a role it has never previously adopted, not even in the darkest days of the war, as the government’s bought and paid-for mouthpiece.

And not just the government’s. Both the Telegraph and the Guardian have been paid millions of dollars by the Bill and Melinda Gates Foundation to promote their coverage of something called Global Health Security. Bill Gates’s GAVI organisation is very keen to promote vaccination worldwide. But what if there are underlying problems with this scheme? What if Gates himself is a bad actor? Do you think those multi-million-dollar donations make it more or less likely that the press will report these issues impartially?

Early in the pandemic, I spoke to one newspaper proprietor who told me his readers were so petrified of coronavirus that they would not dare to go back to work even if there were no lockdown. Another tabloid editor put it to me that you contradict your readership’s prevailing mood at your peril. I get this: the media helped create a monster that it was subsequently unable to control. At the same time, though, our media has never just been about pandering to readers’ prejudices; it has also long been good at doing something called ‘shaping public opinion’. With coronavirus, though, it hasn’t bothered.

This is odd when you think that, from the Reithian BBC to the campaigning tabloids, the media has often played a paternalistic role in trying to improve its audience’s lives. By rights, the last eighteen months should have seen endless human interest stories about teenage suicides, ruined educations, destroyed businesses, closed pubs, the unconscionable cruelty of making children wear masks in class, the iniquity and unBritishness of vaccine passports, plucky rebels defying the burgeoning tyranny. Instead, what we’ve had to endure mainly is endless Captain Tom and ‘gawd bless our NHS’ and patently nonsensical drivel about Matt Hancock’s latest scary Covid variants.

Sure, a little bit of licensed dissent has been allowed to creep into the comment pages. But it’s all far too polite and far too forgiving of the government: continuing, even now, to attribute to bumbling incompetence and arse-covering what is in fact increasingly obviously something much more orchestrated and sinister.

There are so many important questions that our mainstream media has mostly failed to ask, not least at those ridiculous Number Ten press conferences where the press’s default position seems to be: ‘Why weren’t more draconian policies adopted earlier?’

What don’t get asked are the questions that really matter: Why have cheap effective treatments such as hydroxychloroquine and Ivermectin been suppressed? Why are healthy young people with functioning immune systems being railroaded into having experimental and potentially dangerous jabs? Why, whenever countries such as Israel have a mass roll-out of these supposedly safe jabs, is there a noticeable spike in the death rate? Since when – as per a recent tweet by the vaccine-promoting Sun – did ‘herd immunity’ become a ‘discredited’ concept?

Why are we wearing masks and maintaining lockdowns when there is copious evidence – from control countries such as Sweden and US states such as South Dakota which shunned both – that they don’t work? Why, given that all the ‘vulnerable’ have received the vaccine, is the Johnson administration (and those of many other countries too) still refusing to grant us back our freedoms? What about the huge sums of taxpayers’ money handed over to pharmaceutical giants for vaccine orders that can never possibly be used? If the NHS was ever in crisis, how come those Nightingale hospitals remained empty throughout?

Currently, those pages and news bulletins which aren’t filled with distracting, silly stories about Carrie Symonds’s taste in interior decor are dominated by stories about India. Apparently there has been a massive spike in coronavirus cases and deaths, causing hospitals to be overwhelmed, oxygen supplies to run low, and pyre upon pyre of burning corpses. Elements of this may be true but it’s what we’re not being told which is the really interesting part.

To find out what’s really going on in India there’s no point looking anywhere in the papers or on TV. Instead you have to look at Ivor Cummins’s Twitter feed or be part of Robin Monotti Graziadei’s Telegram group. Out there in the wilder reaches of the internet, brave, principled, super-well-informed citizen journalists are doing the job our mainstream media is no longer capable of: sifting fact from fiction, getting to the bottom of the story, telling you the truths that vested interests would rather you didn’t hear.

Did you read about the suspiciously large number of Indians who’ve died within days of taking the vaccine? Or how villagers are being bullied by police into taking PCR tests and jabs which they don’t at all want, preferring traditional Ayurvedic medicine? Or the pressure being brought to bear on President Modi, both by the Bill and Melinda Gates Foundation, but also the US Centers for Disease Control (CDC) which is actually deploying officers of its Epidemic Intelligence Service in India to carry out ‘Covid-19 surveillance’?

This isn’t normal. It’s part of a bio-security takeover by a globalist elite whose underlying motives appear far from benign. Sovereign nations are no longer sovereign. India (Brazil too) is being used to promote the scare narrative that while cases and deaths may be falling in Europe and the US, other parts of the world are falling prey to ‘new variants’ so we must remain in a constant state of high alert. We are being played – brainwashed, gaslit, propagandised – on an unprecedented scale. And the people making this deception possible are the very same people who by rights ought to be exposing it but who have instead decided (or been made to understand) that to do so wouldn’t be helpful to their career.

2020 heard the death knell for the mainstream media (we could see it was moribund in its abject and shaming failure to acknowledge, or even look at, the massive election fraud which cheated Trump out of his rightful second term as president) and 2021 sees its funeral. Our supposed guardians in the media haven’t merely looked the other way while our livelihoods have been destroyed and our liberties have been stolen: they’ve actually cheerled the whole catastrophe.