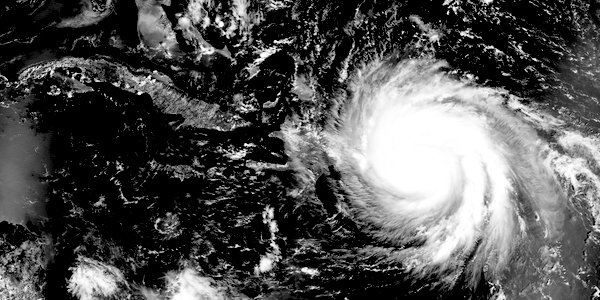 HOW often do we hear claims that there are more hurricanes than there used to be, or that they are now much more powerful? Such claims are bolstered by 24-hour news coverage, featuring dramatic images of extreme weather. Newspapers and TV channels alike can get more viewers and readers with apocalyptic ‘Worse Than Ever’ headlines.

Worse still, many such organisations are happy simply to make up facts to suit themselves. For instance, last year the BBC baldly stated, in a supposedly factual piece, that ‘a warmer world is bringing us a greater number of hurricanes and a greater risk of a hurricane becoming the most powerful category 5’. They were forced to retract this claim only after an official complaint, by which time the false information had gone round the world and back.

But what is the truth?

A study by the Global Warming Policy Foundation shows that hurricanes in fact are not getting more common, or stronger.

The most reliable data is for US landfalling hurricanes, for which the US Hurricane Research Division maintains records back to 1851. The data show no upward trend in hurricane frequency.

The record year for hurricanes was as long ago as 1886, when there were seven.

As for major hurricanes (category 3 and above), there was recently a record 12-year period without any making landfall in the United States, until Hurricane Harvey hit in 2017.

Hurricanes Irma and Harvey made headlines in 2017, and Michael again last year, all making landfall at category 4. Although these were hugely powerful storms, there have been much stronger ones in the past.

Since 1851, there have only been three category 5 hurricanes, the strongest. The most powerful of these was the Labor Day hurricane which hit Florida in 1935, followed by Camille in 1969 and Andrew in 1992.

Although it is unusual to have three category 4s in the space of two years, you have to go back to 2004 and Charley to find the previous one. By contrast, between 1945 and 1954, there were six category 4s. Three more followed in successive years from 1959 to 1961.

Reliable databases for all Atlantic hurricanes, and global ones, do not go as far back as those for the US. It is only since satellite monitoring began in the 1970s that we have had meaningful data globally. Previously many hurricanes were either not spotted at all, or were underestimated in strength. Hurricane hunter aircraft were understandably reluctant to fly into the middle of the strongest storms, and this is likely to have affected the record.

The data that we do have, however, show no indication of any long-term trends.

It is true that there have been shorter-term trends. For instance, there is more Atlantic hurricane activity now than in the 1970s and 80s. But this is generally accepted to be due to the ocean cycle known as the Atlantic Multidecadal Oscillation (AMO). Go back to the 1940s and 50s, and you find similar levels of activity to the present. For example, while there have been 28 major Atlantic hurricanes in the last ten years, there were 39 in the 1950s. The record individual year was 1950, when there were eight.

Whenever a particularly bad storm comes along, there is always someone ready to claim that global warming made it worse. Bigger, stronger, wetter, fast-moving, slow-moving, earliest, latest, furthest north, longest-lasting. I could go on.

A classic example was Hurricane Florence, which brought very significant rainfall to North Carolina. However, what exacerbated Florence were some very specific localised weather conditions. An unfortunate concatenation of prevailing wind directions meant that it stalled off the coast for a number of days, allowing high rainfall totals to build up.

There have been other hurricanes and tropical storms which have delivered more intensive rainfall over the US. Hurricane Floyd, for instance, dumped much more rain than Florence, but this was spread over most of the US east coast as it quickly travelled north. By contrast, Florence’s rainfall was concentrated over what was in fact a very tiny area.

The simple truth is that there have always been catastrophic hurricanes, and always will be. To blame them on global warming is to ignore the data and indulge a new form of green superstition.