The heatwave hype: Phew, what a torture 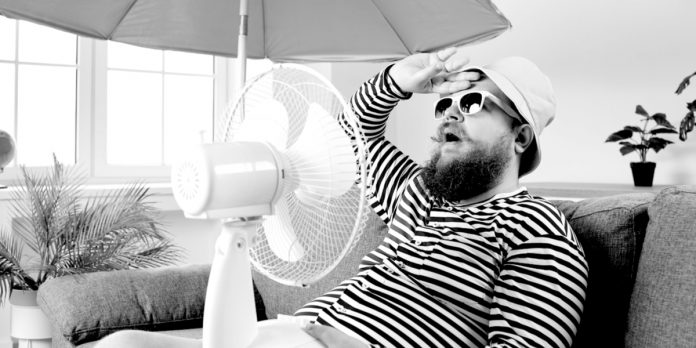 IN August 1940, when the Battle of Britain was raging and a Nazi invasion was expected imminently, Punch magazine published a brilliant cartoon by Pont (Graham Laidler).

It shows a sleepy little pub, where the landlord has a wireless on the bar and has tuned it to a German radio station, which is blasting out a propaganda broadcast.

The announcer is yelling: ‘Meanwhile in Britain, the entire population, faced by the threat of invasion, has been flung into a state of complete panic …’

In direct contrast to the strident speech, the air of unconcerned somnolence in the pub is palpable. The landlord looks bored out of his mind. Nearby, two portly, flat-capped, pipe-smoking old men are equally unfazed, sitting contentedly half-asleep over their pints of warm beer. Of complete panic, there is a total absence.

The cartoon sums up superbly how we used to deal with things in this country – we didn’t make a drama out of a crisis, to echo the old Commercial Union insurance advert. And we treated panicky talk with a healthy cynicism.

In 1940, of course, Britain was facing the most perilous hour in its history.  But in peacetime as well, people generally did just get on with it. They kept calm and carried on.

Well into the post-war years, a distaste for headless chickens, moaners, alarmists, bellyachers and panic-mongers was part of the national psyche. It just wasn’t the British way.

Today, that sensible, stoic attitude has been totally turned on its head – a transformation graphically illustrated by the hysterical reaction to the current heatwave. That’s right … a heatwave. Not a nuclear attack, an asteroid strike, or an invasion by flying saucers, just a spell of unusually warm weather.

Consult the telly, radio, the papers and the internet and you’d think the end of the world was nigh. Talk about laying it on with a shovel! Met Office red warning … record 40C temperatures … thousands will die … national emergency … hotter than the Sahara … stay home … don’t travel … carry water … etc, etc.

However, the most depressing aspect is that it’s not the public propagating the hysteria. It’s the very institutions that should be keeping things on an even keel … the Government and its offshoots, in cahoots with the media.

And, of course, the Climate Scaremongers are having a field day. Justin Rowlatt, the BBC’s beyond-parody ‘Climate Editor’, gleefully tells us: ‘We know what is behind this – greenhouse gas emissions caused by our burning of fossil fuels like coal and gas.’

Actually, Justin, we don’t know. But let’s leave that for now.

Singing from the same scare sheet is the Met Office chief meteorologist, Paul Davies, saying: ‘This is entirely consistent with climate change.’

Over at the Guardian, we’re given a ‘you ain’t seen nothing yet’ piece from a doomster called Professor Bill McGuire. A cheery-sounding cove, Bill assures us we’re all going to fry and compared with what’s coming, a mere 40C will seem like the Ice Age.

As you’d expect, Prince Charles is also getting in on the act, saying the heatwave has proved him right about the ‘climate crisis’ being ‘a genuine emergency’. So sir, no more private jets and helicopters for you, we can take it?

Yes it’s getting mighty crowded aboard the heatwave bandwagon. Back in the day, however, we gnarled old newspaper hacks would call the current event a one-fact story: It’s hot.

There’d be the odd picture published of blokes in deckchairs on Southend prom wearing knotted hankies on their heads, a dog licking an ice cream, or bathing belles taking a dainty dip, but very little day-to-day coverage.

In the scorching summer of 1976, when Britain baked for ten weeks, there was no Sky News, Twitter, Facebook, etc, to make our flesh creep 24/7. Somehow we sweltered through each day without official guidance, such as ‘drink plenty of water’. How we managed to work that one out for ourselves, I don’t know.

There’s no way things could ever be so simple and sensation-free nowadays. Instead, we’re info-bombed by 24-hour rolling news channels and the endless avalanche of guff from the internet and social media.

The mainstream media love a weather story because everyone can relate to it and they don’t have to do any real journalism – the sun conveniently rises and shines each day and is there to be written about.

It’s clickbait gold, a gift that keeps on giving, endlessly malleable, enabling stories to be churned out ad nauseam and back again. It’s the perfect subject for that role model of the modern journalist, Phil Space.

And when stuff like this is constantly in your face, it takes on a life of its own. Before the cyber era, it took ages for a trend, rumour, or craze to develop and spread nationwide.  Nowadays it can happen in minutes as a story or picture goes ‘viral’. Hence with the weather.

At one time in summer, people would normally have stepped outside and remarked: ‘Boy, it’s hot today,’ and then got on with their lives. Nowadays, once they’ve seen the TV news or gone online, they become caught up in the hype and suddenly say: ‘Bloody hell! It’s a national emergency – I better panic.’

And so the whole thing becomes self-fulfilling. As Boris Johnson said recently in another context: ‘The herd instinct is powerful. When the herd moves, it moves.’ And, whether it’s Covid or climate change, there’s no better cattle prod than the Government and media.

As vaccine sceptics and global warming sceptics have found, there’s little hope of convincing most people to think differently once they’ve seen something on their smartphones or had it rammed relentlessly into their brains via the telly or the papers.

To counter the hysteria, I was thinking of trying to form a group of heatwave sceptics, but it’s too bloody hot. So just take it from someone who’s seen his fair share of summers … use common sense, ignore all the hype and tell Justin Rowlatt to stick his climate propaganda where the sun don’t shine. Yes, it’s hot, but it’ll cool down. End of story.

Share
Facebook
Twitter
WhatsApp
Email
Previous articleThat Reminds Me: Howling over a Greek dog
Next articleVaccine versus natural immunity … a Covid study our politicians must not ignore