The hell of Yemen and the ambitions of Iran 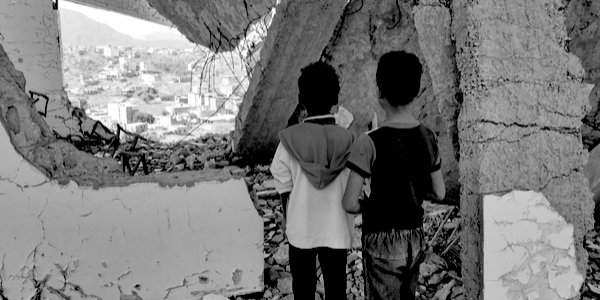 WE all know of Yemen, but we don’t know about it. The magnitude of the suffering in what David Beasley, executive director of the UN World Food Program, describes as ‘the world’s worst humanitarian crisis since the UN came into existence’ is so great that we cannot see beyond the pain. The suffering of Yemen provides its own blinkers to our understanding of what lies behind the horror.

More than 4million children are in danger of death through starvation, disease and hunger. Save the Children estimates that 85,000 under-fives have starved to death, an average of 77 a day since 2015. The civil war has claimed 57,000 lives, 14million are at risk of famine due to the fighting and blockade, and 10,000 new cholera cases are reported each week.

All we know from the mainstream media is that some people called Houthis are rebelling against the government of Yemen and that Saudi Arabia is bombing them, with the help of the UK and USA, and causing untold misery, especially amongst the children.

The present strife is nothing new. Yemen has been almost continuously an area of conflict since before its 1960s civil war. Though North and South Yemen unified in 1990, the antagonisms persisted under 22 years of kleptocratic rule by Ali Abdullah Saleh, who came to power in 1999 with 96.2 per cent of the vote.

In 2011, Arab Spring protests ultimately forced Saleh to resign, to be replaced as president by Abdrabbuh Mansur Hadi. Saleh, however, continued to wield power behind the scenes and maintained the loyalty of many armed forces commanders. In 2014 Saleh formed an alliance with the Houthis, one of the only revolutionary groups in Yemen with military experience.

In part due to horror at the results of Saudi bombing of Yemen and the effects of the blockade, many view the Houthis as a popular indigenous opposition movement and as the victims of religious and political oppression trying to take their legitimate place in Yemen’s political order. However the Houthis do not have clean hands.

Founded in the 1990s the Houthis are a Shi’ite resistance movement which arose in opposition to Saudi Arabia’s Sunni religious influence. The Houthis have no clearly defined political or governance goals for Yemen. They are trying to resurrect the imamate that once ruled Yemen without defining what they want to do with power once they achieve it. Their ideology is summed up in their slogan, known as the sarkha, or scream: ‘God is great, death to America, death to Israel, curse on the Jews, victory to Islam.’

They steadily gained control of territory outside their northern heartlands and captured the capital, Sanaa. In 2015, along with forces loyal to Saleh, the Houthis mounted a coup which forced the resignation of President Hadi.

Yemen has little economic or strategic importance and would seem hardly worth the bloodshed and expenditure by so many nations who are not noted for their love of democracy. The purpose of the coalition is actually a desire to thwart the ambitions of Iran.

Iran’s great geopolitical purpose is to form an Iranian-dominated ‘Shi’ite Crescent’ creating a land bridge across the Middle East, from Iran, Yemen, Iraq, Syria and Lebanon to the Mediterranean. This would give it a power bloc to the north of Sunni Saudi Arabia.

As part of its policy it is attempting to surround Saudi Arabia with client states. Taking power by proxy in Yemen would place it with influence with a territory to the south of Saudi Arabia. To this end Iran has sponsored Shia uprisings in Bahrain, which it considers the 14th province of Iran. Saudi Arabia has claimed Iran was behind Shia uprisings in the oil-rich ‘Empty Quarter’.

The Houthis’ tactics are modelled on the Viet Cong and various Latin American terrorist movements as well as Lebanon’s fearsome Shia Hezbollah. The Houthis, however, lack the discipline of other terrorist groups. Their command structure is chaotic and infighting is rife amongst the factions, especially between military wings and clerics.

Saleh’s alliance of convenience with the Houthis could never last. Although he had used them to return to some form of power it was accepted that they were uncontrollable. Last December the Houthis eventually turned on and killed Saleh after realising he was about to switch sides again to ally with the Saudi-led coalition.

Throughout the war the Houthis have been accused, with credible evidence, of torturing and killing journalists and critics, siphoning off aid supplies, using civilian infrastructure as a shield for military activity and persecuting the country’s Jewish and Baha’i minorities.

In early April 2018 in Geneva, the UN and the governments of Sweden and Switzerland convened a High-Level Pledging Event for the Humanitarian Crisis in Yemen. This raised over $2billion. The largest donors by far were the Saudis and the Emirati who contributed half of the total received. The US pledged nearly $87million, in addition to its contribution of more than $854million for Yemen humanitarian assistance since October 1, 2016.

A UN-backed attempt to broker peace talks to end the war in Yemen faltered in early September when Houthis failed to turn up in Geneva. It is hoped that peace talks between the opposing factions will take place soon in Stockholm. Few expect them to achieve anything.