The inconvenient truth about these savage gang attacks 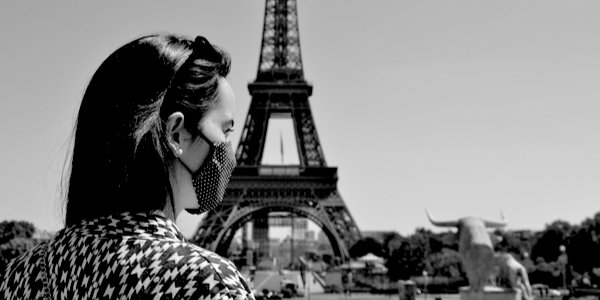 GAVIN MORTIMER, a journalist who covers France for the Spectator, has written recently concerning the attack in Paris on fourteen-year-old Yuriy, a white boy. The brutality of Yuriy’s beating by ten youths (knocking the boy’s eyes out of their sockets apparently) caused mounting consternation, especially after a video appeared of the boy being attacked, beaten to a pulp and left for dead in a square in the 15th arrondissement, one of the so-called beaux quartiers of Paris, and exactly where you wouldn’t expect such an attack to take place, especially after the 6pm national curfew. Apparently, criminality thrives while the rest of us race to the supermarket at 5.15 so that we can make it home by 6.

The story of Yuriy, who remains in hospital, revived references to the ‘ensauvagement’ of France, rejected by the usual suspects, who worry about unfairly scapegoating poor people and minorities.

Mortimer is not one of the usual suspects; he writes for the Spectator and tends to handle taboo subjects manfully. Therefore, I settled in comfortably for a succinct and solid interpretation of the event and its context.

The attack, Mortimer informs us, occurred a few blocks from the notorious Seine-Saint-Denis suburb, where his ex-wife works as a public school teacher and knows the children involved. He explains that Seine-Saint-Denis is a ‘deprived and, for most Parisians, an alien suburb in the north of the city. Were it not for the fact that the national football stadium, the Stade de France, is in Seine-Saint-Denis, few of the capital’s inhabitants would ever venture there.’

Why not, the innocent reader asks? ‘It’s when the violence intrudes into the more upmarket districts of Paris that it makes the national news.’ The implication is that the rest of us are ignorant, lacking in curiosity and heartless, for choosing not to better acquaint ourselves with Seine-Saint-Denis outside football season. (One is tempted to wonder if the inhabitants of Seine-Saint-Denis might learn something from coming more often to the 15th arrondissement. Civility might intrude into their neighbourhoods). But who does go to Seine-Saint-Denis? Who lives there? And why are they violent?

I have an idea, having read some interviews with Maurice Berger, psychologist, in Le Figaro as well as some excerpts from his 2019 book, Sur la violence gratuite en France: Adolescents hyper-violents, témoignages et analyse (On gratuitous violence in France: Hyper-violent adolescents, testimony and analysis). According to Berger, the vast majority of the delinquents with whom his works brings him into contact are of North African origin, which prompted him to reference the work of North African psychologists and to look closely at the family structure, morality, and diminished authority (parental and societal) with which the children grow up.

I skim Mortimer and then I read it again, incredulous. He has managed to write an entire article about, and attempted to contextualise, Yuriy’s attack without touching on the key aspect of it, without which any discussion of it is meaningless.

As a Parisian, I know anecdotally that Seine-Saint-Denis is an area with a huge immigrant population and I also know, as does everyone in France, from where these immigrants come. The Paris public prosecutor’s office told the Figaro in November that 75 per cent of minors arrested for infractions are illegal immigrants whose identity and age are difficult to determine.

Back to Yuriy. Were the offenders rough‘n’tumble New Zealanders, Mr Mortimer? Where’s the rest of the story?

Mortimer turns to his ex-wife for elucidation, and she blames racism for the spotlight on Yuriy: ‘She is understandably cynical about the media and political coverage devoted to the unfortunate Yuriy. Had he been African or living in Seine-Saint-Denis she wonders whether his beating would have made the news, with or without its capture on camera. It takes a killing for the media to take notice of Seine-Saint-Denis, like the murder of 13-year-old Aboubakar, battered to death in a gang fight in 2018.’

So now we know. We care about Yuriy only because he is white. We upmarket-dwelling Parisians go to Seine-Saint-Denis only for football matches.

Mortimer goes on to quote the mayor of the 15th arrondissement, Philippe Goujon, who deplored the rise of gang violence in Paris, and sociologist Marwan Mohammed, who declared it ‘impossible to confirm if there’s an increase in violence or an upsurge in gang membership because we haven’t the means to compile a social and geographical profile of the clashes’.

This is interesting because I have compiled anecdotally and informally, of course, a pretty accurate ‘social and geographic profile’ of violence in France, and so have many other French parents, to make sure our teenagers know where not to go and who to steer clear of.

The article continues with Mortimer raising the spectre of ‘collective narcissism’ on social media and the fact that all the kids have mobile phones as principal causes of mad violence.

Which is interesting because my friends’ teenage children have mobile phones and are also on social media and they don’t go around in gangs or beat other children to death. In fact, my friend’s 14-year-old son, whose chief pastime is tennis, was attacked last year in daylight in a beau quartier by a gang. I bet it wasn’t a gang of François, Apollon and Pierre. And everyone knows it wasn’t, even Mortimer’s ex-wife.

The reason we don’t discuss the delinquency issues, or gangs or crime, is not because no one cares unless it affects a white person (many times the white race of the victim causes criminal hush-ups, as in the case of Rotherham). It’s because if we talk about it, we have to talk about a lot of other adjacent subjects that most people, including, I am disappointed to add, certain Spectator journalists, wish to avoid. Enlarging the subject so that the serious issues are no longer in focus isn’t helpful (‘Parisian teenagers are in violent gangs and on social media’).

These children are violent because of the cognitive dissonance of their collision with Western Europe, inadequate parenting untuned to the mores of the surrounding society and a culture which coddles them by not mentioning that their problems go beyond social media exposure.

If certain subjects are so taboo that we cannot talk about them, we cannot fix the problems. But one day we will have to talk about them because it will not be possible to build a wall around Seine-Saint-Denis.

But what about Axelle Dorier, the 23-year-old woman walking her dog in Lyon’s 5th arrondissement who was attached to a car by two young men last July and dragged 800 yards to her death? There wasn’t much about that either in mainstream media. Were the perpetrators in that case also New Zealanders? Texans? It is impossible to know.

What about 26-year-Adrien Perez, stabbed to death by three youths outside a nightclub in Grenoble on his birthday in 2018, after which even Le Monde denounced the ‘culture of violence’ in Grenoble. I thought Grenoble was known for skiing. Again, virtually no media outrage.

And what about 59-year-old Philippe Monguillot, bus driver in Bayonne, beaten to death in July by three young men because he reminded them to wear masks ? I didn’t hear a lot about that either.

The list goes on endlessly. The incidents, unlike George Floyd, never entered public consciousness, and were scarcely mentioned outside the Right-wing media circles, known derisively as the fachosphère (fascist sphere).