The inspiration of St John the Baptist 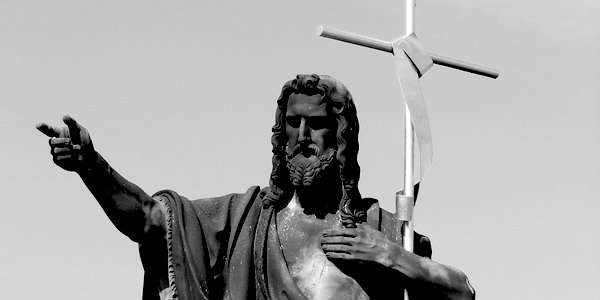 Today is the feast day of the passion of St John the Baptist, and as with the lives of all the saints there is much we can learn from him.

He was born in Judea, cousin of Jesus Christ, child of Zachariah and Elizabeth. His birth to elderly parents was itself miraculous, and shows us that nothing is impossible with the grace of God. Whilst it is understandable, and all too easy, to get bogged down with worldly concerns and allow despair to creep in, it is important that Christians keep this underlying sense of joy and optimism, even though it always needs to be tempered with a critical and realistic eye. Realistic optimism, not bovine.

John was the precursor to Jesus and preached to many about the necessity for the repentance of sins so that they could grow closer to God when Jesus came. No doubt his hard-hitting preaching style would see him accused of hate speech and bigotry now.

His forthright preaching was an essential part of his ministry and is one of the many facets of the Christian life. Even a cursory reading of the Gospels shows that Jesus did not mince his words and often talked of hell where unbelievers and sinners would be thrown with ‘weeping and gnashing of teeth’.

The beauty of the Christian life is that we all have different skills to offer and this can be seen the diversity of the religious orders in the Church. The Franciscans live out Jesus’s love for the poor, the Dominicans dedicate their lives to preaching like He did, the Benedictines channel His asceticism as He retreated into the desert.

There is no ‘one way’ to be Christian in life. As St Thomas Aquinas said, ‘grace builds on nature’ and God works with us as we are, using our natural proclivities and talents. The gamut of humanity is found in the Church.

John the Baptist’s life shows that sometimes a Christian must preach, must speak his or her mind and not be afraid of being unpopular. Some people, no matter what compromises we make, simply won’t be happy until Christianity is expunged from the history of the West.

The death of John is also full of lessons. King Herod had married his half-brother’s wife and John spoke to him on several occasions and condemned this marriage, not unlike St Thomas More.

John was imprisoned and King Herod granted his own daughter a wish. His daughter was angry that John had condemned her mother’s scandalous marriage to Herod and asked for John’s head. Herod reluctantly obliged, not having wanted to kill the preacher.

The lives of the saints are full of people dying for the truth: St Thomas More for refusing to bow to Henry VIII; St George tortured for not renouncing his faith in Christ; St Bartholomew flayed alive and then crucified upside down. Although prudence is a virtue, and no one wants to be obnoxious, there are times when we must state the truth of the matter firmly, and if that makes people dislike us then so what?

Without overstating the claim, these are tricky times to be Christian, particularly in the West. For the first time in hundreds and hundreds of years the prevailing culture we live in is not remotely Christian. As we descend into paganism the saints are a great source of inspiration.

John’s life began miraculously, and continued into a courageous and outspoken ministry. He shows us to trust in God and that preaching and truth-telling, when done right, is a crucially important part of being a Christian.