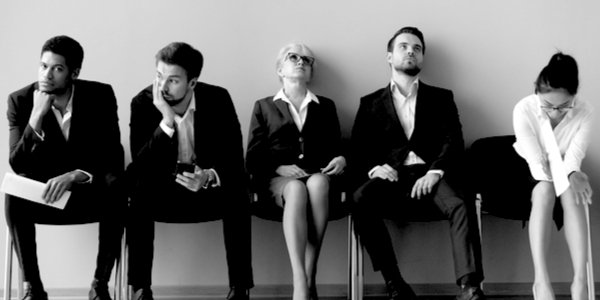 THE labour market has been severely disrupted by government responses to Covid-19 throughout 2020, and this continues in 2021.

From the first lockdown, UK employees found themselves divided into those whose work was deemed ‘essential’ – MPs, journalists, health workers, bus drivers, supermarket workers, refuse collectors and delivery drivers. Many of them had no option but to continue travelling to and from their workplaces and exposing themselves to the virus.

‘Non-essential workers’ either lost their jobs almost immediately or joined the one in six workers ‘furloughed’ on full or partial pay. Many directors of small businesses were left to fend for themselves, and workers who could were instructed to work from home.

What is clear is that even before Covid, the UK jobs market was changing due to technological advances such as digitalisation and AI, demographic shifts and changes in consumer habits. Some would have you believe that the ‘climate emergency’ was also creating a ‘green economy’ and that the Conservative government was working to help businesses improve productivity.

What is less clear is how the UK’s entrepreneurial base, those small to medium-sized businesses (SMEs) that hitherto formed the backbone of the economy and created jobs and tax revenue, were expected to survive. Many have folded, not because they were unviable but because their owners have been broken on the wheel of government duplicity.

Computer-based office work, including administrative jobs in banks, hospitals, courts and factories, has all shifted to home working. This is the largest job arena in advanced economies, accounting for roughly one-third of all employment. Despite the average home worker putting in six hours of unpaid overtime a week, according to the Office for National Statistics,  the temptation for organisations that deliver these services will be to outsource them to lower-cost domains.

The British high street has suffered badly from the lockdowns, with more than 17,500 store closures. Analysts, including Lisa Hooker at PWC, suggest that the full impacts of Covid are yet to be felt: she predicts a dim future.

With lockdowns forcing many to stay at home, consumer behaviour has moved away from bricks and mortar outlets to online buying. E-commerce and other virtual transactions are booming, with growth rates two to five times faster than before the pandemic.

Cities emptied of commuters and shoppers have done much worse than suburbs and small towns which are more accessible to people barred from travel and working from home.

Construction sites, farms, residential and commercial ground works have, however, been little affected by Covid as this type of work requires low proximity and few interactions with other people and takes place fully outdoors.

UK tourism is in the doldrums, according to the ONS, with few overseas visitors and no domestic market. Airports, hospitality and leisure venues have been devastated. While travel and tourism may rebound after the crisis, estimates suggest that about 20 per cent of business travel, the most lucrative segment for airlines, will never return. This will have knock-on effects on employment in commercial aerospace, airports, hospitality and food service.

For the first time, London has been hit harder than other regions, according to the Financial Times. With the South East, it accounted for a third of the closures of all shops during 2020. The capital’s reliance on international business activity, travellers and tourism has revealed an acute vulnerability.

Employees in the public sector have been relatively unscathed. For example, in Our NHS, all employees, except for ‘front-line staff and essential workers’, were instructed to work from home on full pay. Anyone deemed to be ‘clinically at risk’ was given leave of absence on full pay. Many NHS workers have been awarded bonuses for their performance last year, and recruitment for staff at all levels has continued throughout the pandemic. Changes in health and social care provision for non-Covid patients during the past year are obvious, with reliance on telephone consultations and helplines. These practices may decline as face-to-face services reopen but are likely to continue well above levels seen before the pandemic.

Local and central government employees were instructed to work from home and provided with the necessary equipment, including desks, chairs and computers. Recently announced rises in council tax of up to five per cent from April will ensure that their featherbedding continues.

In higher education, more than 23,000 university professors have delivered negligible in-person teaching for the last academic year, moving to online delivery. Together with lecturers in colleges across the UK, their jobs have been protected. Not one university or college, however, has refunded student tuition fees.

That said, the pandemic has revealed flaws in how UK universities have chosen to operate for over a decade, relying increasingly on the work of academics on insecure ‘fixed term and temporary contracts’.

Some institutions have also cut back on payments to graduate teaching assistants, placing them in an even more parlous financial position than before.

Recently published research from the Learning and Work Institute suggests that the pandemic has hit young people (16-24) hardest: ‘They are more likely to have been furloughed, and they account for three in five of all jobs lost since the start of the pandemic.’ Around one in five young people, and over one in five black, Asian and minority ethnic (BAME) workers have lost their jobs.

Youth unemployment is three times the national rate, which the ONS puts at 4.9 per cent. This means that almost 15 per cent of young people have no work and little prospect of any, according to a Resolution Foundation Report.

The ONS current unemployment figures do not include the estimated five million workers on Rishi Sunak’s jobs retention scheme (CJRS) which has been extended until September 30.

There is growing demand for workers in healthcare and STEM occupations, reflecting the needs of an older demographic and expanded personal care demands. There will also be a requirement to treat and care for people whose health needs went unaddressed because of Covid.

Jobs in warehousing and transportation are also likely to increase in response to the growth in e-commerce and the delivery economy, but those increases are unlikely to offset the disruption of many other low-wage occupations. Published job vacancies in April have stalled at 22.7 per cent below where they were a year ago.

The pandemic has accentuated inequalities which had previously been bubbling under the surface and there are fears that the post-pandemic labour market will be one of increased job insecurity and scarce employment.

The scale and nature of the workforce transition that we face is highly challenging; the absence of any apparent government strategy to deal with it speaks volumes.