The Laura Perrins interview: Ukip’s Suzanne wants to take control of the drawbridge to Britain 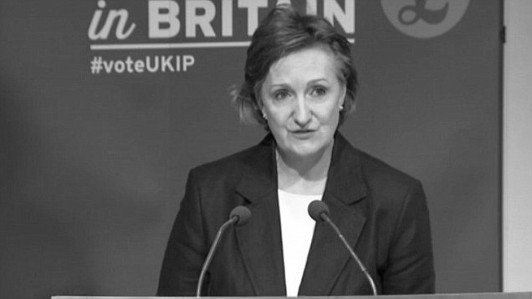 Laura Perrins: You are no longer Deputy Chairman of Ukip but your new position is Spokesperson for the Ukip parliamentary party. How is the new role going?

Suzanne Evans: It’s only been a few days, but so far so good! It’s lovely to be part of a small, highly competent, dedicated, and very friendly team.

LP: Why should Britain leave the EU?

SE: I‘d like to turn that question around and ask: if Britain were not in the EU today, would you vote to join it?

Would you vote to allow nationals of 27 foreign countries to force Britain to do as they say on issues such as border control; immigration and asylum; business and employment; financial services? Would you vote to give them full control over our farming and fishing industries, to the point where they can tell a dad who takes his son fishing on the weekend how many fish they are allowed to catch?

Would you hand over responsibility for negotiating trade deals to them? Give them control of VAT or ultimate responsibility for how we deal with criminals? Let them dictate what information we put on food labels? The right to tell us we must send animals across a continent for slaughter, however much it distresses them? And would you agree that paying them £20 billion a year for this privilege is a fair deal?

Oh, and by the way, the 27 who will be making this decision over our heads include former communists and failed heads of state. And they won’t be elected by us; we probably won’t know who they are; they won’t be accountable to us; we won’t be able to sit in on their meetings and see for ourselves what’s going on; and we won’t be able to vote them out of office if they screw up. Are you okay with that?

I’m not. We would never join today, so we should vote to leave now.

LP: You are also with Women for Britain (to leave the EU).Arguably, women could decide the referendum and are a key constituency. In my opinion, women can be very risk averse, sometimes for good and sometimes for ill. Generalising, many will instinctively go with the status quo. They will be particularly sensitive to how things will look in the future for their children and might be susceptible to the repeated scaremongering by Cameron and Osborne.

What’s your pitch to women?

SE: Women fought long and hard to get the vote in this country, but now the power we have at the ballot box is being stripped away from us by stealth. The suffragettes’ efforts have been completely undermined because unelected EU commissioners make most of our laws, and ultimately plan to make all of them.

Britain has always been ahead of the EU on women’s rights. On issues like equal pay, divorce, domestic violence, abortion, contraception, maternity leave and childcare, for instance, UK law has always been stronger than anything the EU has done.

Whatever your views on some of these issues – clearly there is heated debate on abortion & divorce, for instance, it is the British people through their elected representatives that should make any changes – not supranational EU legislatures, Brussels bureaucrats or even worse European courts.

On the matter of women’s rights, the EU has always been playing catch up with the UK.

Often, the EU has made life harder for women. The EU has pushed up the cost of car insurance for women, for instance, and has introduced legislation that’s forced many women choosing to work part-time on zero-hours contracts. Open borders have made it so much easier for criminals to traffic women into sexual or domestic slavery.

For goodness’ sake, our government now doesn’t even have the power to scrap VAT on tampons because of the EU! Are we strong women who want to maintain the power to lobby our government? Then voting to leave is the only safe option.

LP: If Britain leaves the EU, what is the Suzanne Evans immigration policy?

SE: My immigration policy is unashamedly Ukip immigration policy as written in our general election manifesto. It’s a sensible, Australian-style, points-based immigration system that doesn’t discriminate in favour of predominantly white, Christian Europeans but treats everyone equally, whatever their race, religion or country of origin.

It’s an immigration policy that welcomes into Britain those who will bring the skills we need; who are willing to integrate into British life; obey the law; and be self-sufficient. It’s an immigration policy adhered to by most countries in the world. It’s a policy that is absolutely not about raising the drawbridge to Britain, just about controlling who walks over it.