The Left, humourless by definition 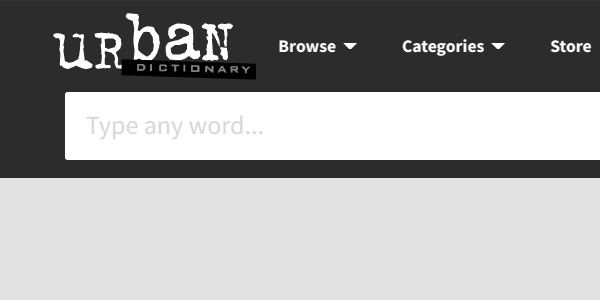 HAVE you ever been on Urban Dictionary? If not, let me explain. It’s a website where you can find the definition of phrases and words that might be outside the scope of the Oxford English Dictionary.

Entries – of which there are more than 12million and which are crowd-sourced – range from the esoteric to the unprintably offensive.

There is no content filter: Racist epithets, sex acts, insults – it’s all there. Most of it enough to make even a docker blush. It is a repository of the insulting and the profane.

Nevertheless, the good administrators of Urban Dictionary – who, for 22 years, were happy to let their website become the equivalent of the OED’s drunk and obnoxious brother – have finally put their digital foot down and removed a definition.

The phrase in question? No, not ‘Hitler did nothing wrong’, or even ‘the Lolocaust’. Instead, it was ‘Blue Anon’.

‘Blue Anon adherents fervently believe that Right-wing extremists are going to storm Capitol Hill any day now and “remove” lawmakers from office, hence the need for the deployment of thousands of National Guard stationed at the US Capitol.’

Blue Anon is a play on QAnon – the unhelpful conspiracy theory which maintains that a global child sex-trafficking ring is being run by a secret cabal of Satan-worshipping cannibalistic paedophiles.

(There is probably one word in that list of accusations that rings true. How is Mr Epstein doing nowadays, anyway?)

After months of incanting mindless, zombie-like phrases of ‘Trust The Plan’, and ‘The Truth Will Out’, on various platforms online, QAnon appears to have died a rapid death in the midst of Sleepy Joe successfully cheating his way into the White House, with nary a satanic paedophile uncovered – at least as of yet.

Blue Anon, by contrast, flourishes. The sharp contrast between its adherents’ conspiratorial fever dreams and reality is not permitted to be mentioned in a world where nearly every institution is irredeemably poisoned by the collective insanity of the Left – a group almost entirely stridently atheist, but whose beliefs fly so firmly in the face of all reality that they make transubstantiation look like simplicity itself.

Any attempt to poke a hole into the fabric of lies and self-sustaining distortions that buttress the complex and contradictory lies maintained by the modern-day establishment is strictly verboten.

Nor is it just Urban Dictionary. Google is on the act too. A quick search for ‘Blue Anon’ on Google returns a decidedly barren set of results. By comparison, a search on DuckDuckGo returns pages of Blue Anon-related results. Funny, that.

Looking at Urban Dictionary’s blog, it all becomes a bit easier to understand. The website states that it ‘support(s) the work of Black Lives Matter to dismantle systemic racism’ and vows to protect women, BIPOC and LGBTQIA+.

Admittedly, I have no idea what the second item in this list is, and I lose track after the Q in the third. Anyway, when will they step and protect NPBTOALTBS folk? Don’t know what that stands for? Keep up with the times: ‘Normal People Bored & Tired Of All This Bulls***.’

That said, the website can still be fun and a repository of modern-day heresies. Just look at its second-highest-ranked definition of whiteness …

How long until such unacceptable wrongthink is removed from the website? Not long, I would wager. Such is the radical humourlessness of the tedious Left.

Editor’s Note: Urban Dictionary has restored the page for ‘Blue Anon’ since the writing of this post. We understand however that Google is still suppressing search results for the term.