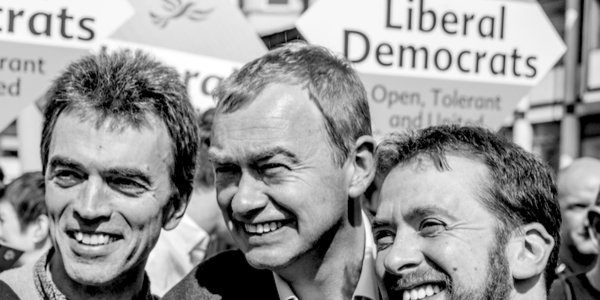 THE doctor is still in the House, but Phillip Lee no longer sits with the government. Earlier this month the part-time GP theatrically crossed the floor to join the LibDems: staged for maximum effect while Boris Johnson was speaking at the despatch box, Lee’s public defection marked the dramatic moment when the Conservative/DUP alliance became a parliamentary minority.

“I gave a year of my life to try to fight this – and to try and get to a second referendum.”

Dr Phillip Lee MP – who recently defected from the Conservatives to the Lib Dems over Brexit – says he had to resign because the new government “is not actually Conservative”. pic.twitter.com/I3k47sh0l4

Interviewed by Channel 4 News, Lee subsequently complained that his former party is ‘not actually Conservative’. But regardless of how he defines it, he is already discovering that having a history of conservatism, even with a small-c, is anathema within the Illiberal Anti-Democrats.

In his resignation letter, Lee bemoaned how ‘the Brexit process has helped to transform this once great [Conservative] Party into something more akin to a narrow faction . . . infected by the twin diseases of English nationalism and populism’. However, instead of finding a new ‘broad church’, Lee inexplicably has joined a sect in which even a hint of social conservatism is heretical.

While a Conservative, and based upon his experience as a GP dealing with patients from sub-Saharan Africa, in 2014 Lee had argued that immigrants to the UK should be tested for HIV. In LibDem circles this automatically labels Lee as a xenophobe, in addition to which he is now branded homophobic for having made what he calls a ‘liberal choice’ to abstain on the 2013 vote for same-sex marriage.

Have RTed this before but am doing so again because… well, the rumours that Philip Lee is joining the party continue. He's not a liberal. He's a xenophobe and a homophobe. I will not share a party with him. https://t.co/jhUtmJ8vUw

The above tweet was by Jennie Rigg, who self-describes as ‘bi polyam Liberal . . . not even slightly centrist/moderate’. Until recently chair of LGBT+ Liberal Democrats – a body officially recognised by the party – Rigg was true to her word that she ‘will not share a party with him’ and publicly quit the LibDems the moment Phillip Lee defected.

Also leaving the party in protest have been other similarly minded activists, including Rigg’s erstwhile committee colleagues Sarah Brown and Zoe O’Connell.

Article on the LGBT+LDs website by the replacement for my replacement (yes, we have been resigning THAT quickly) gives further and better particulars should anyone want themhttps://t.co/jw1ycQO0TE

Both Brown and O’Connell are transwomen and cohabit with Brown’s wife as a polyamorous trio. Last year these everyday folk were formally honoured by the Liberal Democrats for ‘services to women’.

The @LibDems love her. She just got an award from them, in fact, for services to women. pic.twitter.com/2Fi5VkrYkK

However, in the case of Sarah Brown – a former LibDem councillor and still an adviser to Stonewall – these ‘services to women’ appear to include abusing anyone who believes women-only spaces should be free of male genitalia. Brown is particularly remembered as the author of the charming message ‘suck my formaldehyde pickled balls’.

Not exactly Dorothy Parker. Although Phillip Lee has done his new party a favour by ridding it of at least some cranks, the LibDems still contain many others of similar mindset. According to MP Christine Jardine, admitting Lee has caused a ‘lot of unhappiness, frustration and apprehension’, because of which Dr Lee has been summoned to justify himself to the party’s LGBT+ commissars.

These are the people for whom Tim Farron, the Christian who while leader performed contortions to avoid saying that he regards gay sex as sinful, remains persona non grata.

For these zealots, even the impeccably PC parliamentary party is insufficiently sensitive. Cheered by conference delegates for wishing to block Brexit, a few days ago new leader Jo Swinson was nonetheless heckled from the floor during her lukewarm defence of Phillip Lee.

Also with an opinion was of course the ubiquitous Layla Moran. Unimpressed by Lee’s previous record, loquacious Layla had the ominous message for her new colleague: ‘I would love to think that if he was a LibDem at the time we would have told him what’s what, and the bigger picture.’

Being ‘told what’s what’: this, Phillip, is your future – insofar as you have one. Your new party’s leadership (though not all of the activists) will for now tolerate your previously modest social conservatism, but this will last only for as long as the party can exploit you as a useful idiot in the LibDems’ battle against Brexit.

In the meantime, Phillip, the party might even try to re-educate you: the LGBT+ Liberal Democrats claim to have been ‘reassured by Alistair Carmichael that Dr Lee is on a journey towards Liberal Democrat values’.

‘On a journey towards Liberal Democrat values’? Phillip Lee is now on the road to hell.