The long-haul flight that was a holiday in itself 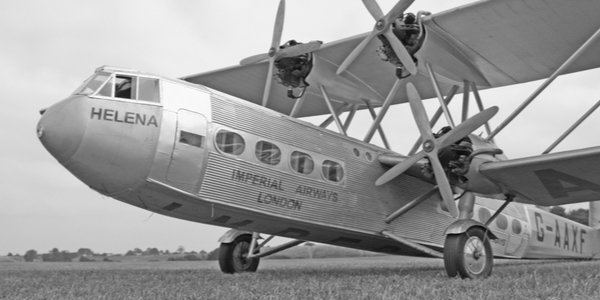 IT takes 22 hours to fly from London to Sydney, and in economy it’s 22 hours to be endured. You worry about DVT so you must book an aisle seat. But the sights of Europe, the Middle East and southeast Asia pass unseen six miles below. All you can do is stare blankly at films that on the ground you would never think of watching.

It wasn’t always like this. There was a time when climate was thought to be permanent and unchanging. When the telephone (for the few who had one) was on the hall table, under the barometer. When homes had real fires burning coal, or coke from the local gas works, so you could come in from a frosty walk and get warm straightaway. When there were more than 6,700 railway stations in the UK so you went everywhere by train.

We celebrated the silver jubilee of King George V and Queen Mary in May, and in the middle of that same month Devon had a heavy snowfall, showing that ‘extreme’ weather is nothing new. In October Plymouth had a one-night practice ‘blackout’: street lights were turned off, windows blocked and RAF bombers cruised overhead.

This was 1935, when you could embark on the P&O Strathnaver and reach Sydney by way of Marseilles, Suez, Bombay and Colombo, taking a leisurely six weeks. But you could also fly there.

From Croydon to Singapore, Imperial Airways used the Handley Page type 42, which cruised at 100 mph and had a range of 500 miles. It was at the time the largest aeroplane in the world: an ungainly-looking four-engined biplane that could carry 24 passengers in great comfort, plus cargo and mail. You can see a film of it here.

Qantas took you on to Brisbane and Sydney.

Perspicacious readers will have realised that Australia is rather more than 500 miles from the Imperial Airways base at Croydon, and that 100 mph is not very fast. However, although the journey by air would take nearly a fortnight, that was a month less than the P&O liners.

No navigation beacons and no air traffic control meant flying low enough for the pilot to find his way by checking features on the ground. The passengers sat in large seats next to a huge window so there were breathtaking views of cities, deserts, jungles, ancient ruins, fortresses, and peoples and places you never knew existed.

No need to provide on-board entertainment; life through the window was more exciting than any film. No one went to sleep or they would have missed the overladen ferry barely making it across the Indus south of Hyderabad, or the string of exotic and mysterious islands stretching over a thousand miles from the southern tip of Sumatra to Timor.

My Imperial Airways map, published in 1934, says their route to Sydney was 13,129 miles long and the airline covered that in 13 days. The average distance per day is therefore 1,010 miles. But the plane can do only 500 miles on one tank of fuel, and the wise pilots would surely never have gone on till the red light showed? Maybe 450 miles at a stretch?

Short range plus basic navigation instruments meant there was no flying in the dark, so there were twelve overnight and maybe another twenty refuelling stops en route. At the end of each day the passengers would be taken to a hotel or guest-house, the standard of which varied widely depending on where the pilot had landed.

It wasn’t cheap to fly that far. The single fare was £195, the equivalent of about £14,000 today. The cheapest ticket on a P&O liner was half that. It was the plane’s limited range which meant passengers enjoyed a unique holiday while travelling. Every day enchanting views of unknown lands, every night somewhere different.

My Imperial Airways map shows all the landing grounds on the way to the Far East and Australia (it is too big to contain in one picture). You flew by way of Paris, Brindisi, Alexandria or Cairo, Baghdad, Sharjah (on the Persian Gulf), Karachi, Calcutta, Rangoon, Singapore, Batavia, Darwin and Brisbane, plus many other smaller places needed for refuelling.

You had an unforgettable holiday before you even arrived. What a wonderful way to travel.