The many ways they lie to us 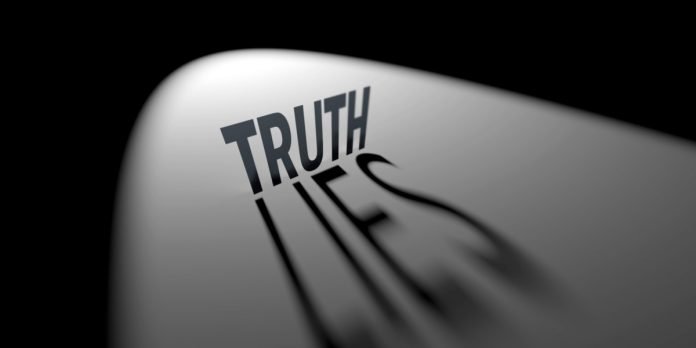 AMERICA’S new Disinformation Governance Board  has already hit the buffers. The Department of Homeland Security (DHS) has ‘paused’ the Board’s activities, while Nina Jankowitz, faced with a torrent of harassment and abuse, resigned after just three weeks.

The board was set up to focus on potential disinformation threats from Russia, especially during election cycles. Officials were always on the look-out for Kremlin-backed interference, particularly given the Ukraine/Russia situation. However, as an official said, ‘The great irony here is that the board was designed to protect against the very thing that the board is now accused of engaging in.’ So, the work of all those dedicated agents working on mis-, dis-, and mal-information has been suspended. The Ministry of Truth is on hold.

Last Friday, during the Michael Sussmann trial, Hillary Clinton’s campaign manager Robby Mook testified that the Russia-Trump collusion narrative of 2016 was long known to be a dirty trick and emanated from Clinton’s own office.

At the same time, Donald Trump demanded ‘immediate legal action’ against 43 ex-CIA agents who had confirmed that the Hunter Biden laptop story had ‘all the classic earmarks of a Russian information operation’ when in fact the laptop contained evidence of extensive business dealings, including with China, making him over £11million while his father was VP. These assessments enabled the MSM not to report the story, and by influencing some of the electorate to vote for Biden Snr, may have subverted the outcome of the election through knowingly flagrant misconduct.

All this makes you wonder how anyone is supposed to differentiate between truth and lies in our brave new world of information overload and sophisticated technology. Are we being told plain unadulterated facts, or misled by deliberate subversion via ‘mis, dis or mal’ (MDM) for political purposes?

The Canadian Centre for Cyber Security takes these matters very seriously. MDM costs the global economy billions each year. As ‘fake news’ it damages public trust in institutions, even democracy itself. They list the new technologies – machine learning, language processing, amplification networks, and artificial intelligence – which can be harnessed to spread false information, while ‘deep fakes’ can artificially generate images and audio to be used in place of the originals. They define the labels:

·       Misinformation is false, but not intended to cause harm – an honest mistake or plain carelessness;

·       Malinformation stems from the truth but is exaggerated to mislead and cause harm.

The challenge is in deciding into which category any report falls. Errors and downright lies can be checked out, corroborated, witnesses found, with effort and persistence. The real challenge comes with the manipulation and twisting of facts. It’s dangerous, but crucially important.

Even without their Disinformation Board, the US Security Services have been keeping busy, especially via hostility towards Putin and all things Russian. It’s Ukraine that has powered all this controversial reporting into overdrive.

Take the video footage which appeared on social media purporting to show Ukrainian soldiers shooting Russian prisoners in the knees and groin. The BBC questioned whether the report was authentic or staged, following criticisms that the absence of blood, shouting or screaming, and even assault rifle recoil, indicated the film was faked. A trauma surgeon opined, however: ‘It appears genuine. These meet the description of punishment shootings.’ Another stated, ‘This requires an investigation for war crimes.’

War crimes? Committed by our plucky Ukrainians? Those same troops who occupied the Mariupol Steelworks and vowed to resist to the last man standing? By mid-May the MSM were reporting that hundreds had now been ‘evacuated’ from the besieged plant, to save further losses among their comrades. But by May 17, Reuters reported that these hundreds had surrendered ‘to an uncertain fate’. Moscow’s report called them the Azov Regiment, one of the main perpetrators of alleged anti-Russian nationalism responsible for years of attacks on Russian-speaking Ukrainians. Initially formed to fight Russian-backed separatists in the Donbas, it had supposedly been reformed and integrated into the Ukrainian National Guard. But a Russian spokesman that the prisoners ‘do not deserve to live after the monstrous crimes against humanity they have committed against our prisoners’.

In time of war, it’s the winners who are the heroes, and the losers take the blame. So, for the western MSM right now, it’s the Russians who are the war criminals, and now they have a show trial to prove it. Last Friday, a captured Russian soldier was charged with the murder of a 62-year-old civilian. The 21-year-old sergeant has not denied the killing, but claims he was ordered to carry it out to prevent the man from reporting the Russians’ presence. He gave himself up, and if found guilty, could face life imprisonment.

The case has huge symbolic significance for the Ukrainians’ image as the ‘plucky little victim’ at the hands of Russian barbarism, and its world-wide reporting constitutes a valuable propaganda coup, as Kathy Gyngell pointed out on GB News. The scenario represents all the elements of a classic malinformation set-up: a basis in factual accuracy, but embellished with highly emotional constructs, such as the defendant’s ‘cold eyes’ of the executioner, the inconsolable widow confronting him in the courtroom, the fine reputation of the civilian.

The Canadian Cyber team has drawn up a checklist of questions to help evaluate information sources critically. Most important is whether the material provokes an emotional response, and uses small pieces of valid information that become distorted or exaggerated. This shows that MDM reporting goes straight for the emotional jugular, twisting the truth to brainwash a mainly receptive, often ill-informed and naively influenced audience.

These are the tools of the giant commercial and political organisations, certainly in the West. They have the vast wealth, the experts and technocrats, the contacts and the intention to exploit every possible situation. Even now, their CEOs are meeting in Davos to discuss how the future will pan out in their interests, without our knowledge or participation. What chance does the ordinary individual have against the overwhelming power of these globalists?

All the individual can do is to remain constantly and critically aware that all media is biased and skewed, and must be treated with scepticism. The challenge is massive.

In his book Dark Territory,  Fred Kaplan probed the ‘information warfare’ squads of the Pentagon’s beyond-top-secret cyber units, and exposed the vulnerability of both nations and individuals to these high-cost and high-tech activities. Yet, quoting former Senator Church, he wrote: ‘The American public should know enough about intelligence activities to be able to apply their good sense to the underlying issues of policy and morality.’ If only!

Kaplan concluded, ‘We are all wandering in dark territory, most of us only recently, and even now dimly, aware of it.’ This is the real World War III, and there can be no surrender.