Over the summer we are repeating some articles from The Midweek Hymn series. This was first published on March 20, 2019.

SOME hymns have taken a circuitous route to their present destination. One such is the wedding favourite O Perfect Love.

The words were written by Dorothy Blomfield in 1883. She came from a church family – her father was rector of the historic St Andrew’s Undershaft in the City of London (now noted as a rare example of a church that survived both the Great Fire of London and the Blitz) and her grandfather was Bishop of London. She wrote poetry, her best-known work being God’s Garden. The fourth verse can sometimes be seen on sundials and garden plaques:

The kiss of the sun for pardon,
The song of the birds for mirth,
One is nearer God’s heart in a garden
Than anywhere else on earth.

You can read the whole poem here.

Dorothy and her sister, who was due to be married, were visiting a house called Pull Wyke near Windermere. A group of young people were singing the hymn O Strength and Stay. Dorothy Blomfield’s sister heard this, and while the words, which you can read here, written by St Ambrose of Milan (340-397) and translated by the Rev John Ellerton (1826-1893), didn’t appeal to her (there is a reference to ‘a holy deathbed’), the music did.

Dorothy wrote later: ‘It was Sunday evening and we were enjoying a time of hymn singing. A song that was particularly enjoyed by all of us was O Strength and Stay, the tune to which was a favourite of my sister. As we finished singing this hymn, someone remarked, “What a pity the words of this beautiful song should be unsuitable for a wedding!” My sister turned to me and challenged, “What is the use of a sister who composes poetry if she cannot write new words to a favourite tune? I would like to use the tune at my wedding.” I picked up a hymnbook and said, “If no one will disturb me, I will go into the library and see what I can do.” Within 15 minutes I was back with the group and reading the words I had jotted down. The writing of the words was no effort whatever after the initial idea came to me of the twofold aspect of perfect union, love and life. I feel that God helped me write this song.’

O Strength and Stay is performed here by the choir of St Paul’s Cathedral.

The tune which Dorothy’s sister liked (and so do I), called Strength and Stay, was written by John Bacchus Dykes (1823-1876), an English clergyman and hymnwriter. He was responsible for many great hymn tunes including Melita (Eternal Father, Strong to Save) Nicaea (Holy, Holy, Holy! Lord God Almighty) and Dominus Regit Me (The King of Love My Shepherd Is).

O Perfect Love was probably first printed in 1884. For two or three years it was sung at many London weddings and then began making its way into hymnbooks, the first appearance being the Supplement to Hymns Ancient and Modern of 1889. 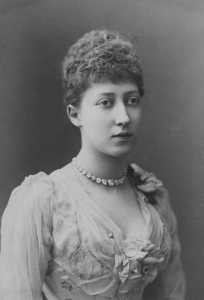 hat year Queen Victoria’s granddaughter Princess Louise (pictured here) chose it for her wedding at Buckingham Palace to the Duke of Fife. Ironically, the princess loved the Blomfield words, but was not keen on the Dykes tune.

The composer chosen for the task of writing a new one was Joseph Barnby. He was born in York in 1838, the son of organist Thomas Barnby. When he was seven, Joseph joined the choir at York Minster and at only 12 became organist and choirmaster. At 16, he entered the Royal Academy of Music, London. In 1871 he was appointed, in succession to the French composer Charles Gounod, conductor of the Royal Albert Hall Choral Society, in which role he orchestrated daily concerts in the Albert Hall. He became principal of the Guildhall School of Music in 1892 and was knighted the same year. He died in 1896, aged 57.

He gave the name Sandringham to the tune he wrote for the royal wedding, and this is the one used today.

At the age of 40, after years of caring for her ageing parents, Dorothy Blomfield married an actor, Gerald Gurney, in 1897, and her married name is the one which appears above O Perfect Love and God’s Garden. In 1904 Gurney was ordained in the Church of England, and the couple lived for a while in Plymouth. In 1919, both converted to Catholicism, to the shock of friends and relatives. Their later years were spent in Denbigh Road, Notting Hill. Dorothy Gurney died in 1932, at the age of 74, having never received a penny in royalties for her world-renowned hymn. Her husband died in 1939, aged 77.

A side-effect of writing this column – I am not sure I would call it a benefit – is that the tune of the week’s hymn becomes jammed into my brain, evicted only by the next one. This happened a couple of weeks ago when I wrote about We Rest On Thee, the hymn sung by five American missionaries before they set out on their fatal expedition in the Ecuadorian jungle in 1955. The tune was Sibelius’s Finlandia Hymn, which is the usual melody. However one morning that week I woke with the words of We Rest On Thee perfectly clearly in my head to another tune. After much concentration I remembered that the mystery tune was Sandringham for O Perfect Love. I checked with my musician friend Helen Oliver and she confirmed that at Christ Church Beckenham that was indeed the tune to which we sang We Rest On Thee. It was the preferred melody of the organist, the wonderfully named Christian Strover, who died in 2020 on his 88th birthday. At the risk of committing sacrilege, I think Sandringham is a better fit for We Rest On Thee than the Finlandia Hymn, and it does not require the last two lines of the verses to be repeated. If you would like to try it, here are the words of We Rest on Thee.

Anyway, here are some performances of O Perfect Love (you can see the words here.) The first is by the Scottish Festival Singers.

This is by a brass band, The Royal Air Force Association President’s Band.

And this is my favourite, by the Romanian ensemble Baietii din Brasov (The Boys from Brasov).

Finally, the Edward Elgar archive has the composer’s manuscript of a four-part setting of O Perfect Love. It is inscribed with the name Alice Stuart-Wortley and the date June 22, 1914.

Mrs Stuart-Wortley was the daughter of the pre-Raphaelite artist Sir John Everett Millais and it seems that the married Elgar was in love with her. He called her his ‘windflower’. She had attempted to write a new melody for O Perfect Love for a niece’s wedding and asked Elgar for help. It is not known how much of the manuscript is her work and how much is Elgar’s. On 16 July Elgar wrote to her: ‘I am so glad the hymn tune went well. I am sure no one could help loving it – perhaps not so much as I do.’

Here it is performed by the choir of the Royal Hospital, Chelsea, as part of a project by the pop musician Manfred Mann to record a collection of Elgar hymns which he discovered when he bought some manuscripts at auction.

I don’t believe it ever caught on as this is the only recording of it I can find.