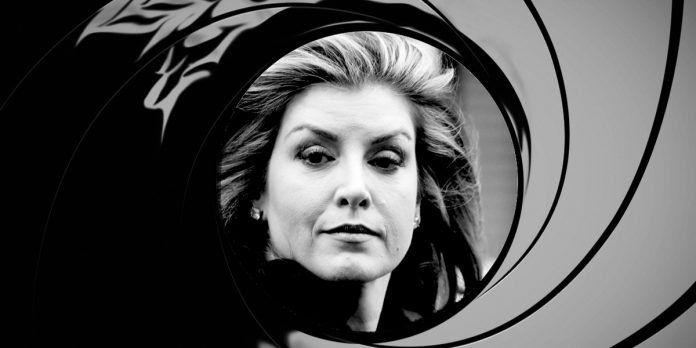 THE Daily Mail reported that a senior naval officer believed Penny Mordaunt had exaggerated her Naval experience . . . ‘She isn’t [currently] a trained or paid reservist, she’s never qualified or been commissioned. She’s been banging the Naval drum for days and enough is enough. How she has presented herself – and how she has allowed herself to be presented – have been deeply misleading.’ TCW Defending Freedom had a breathless call from the Prime Ministerial candidate who wanted to put the record straight.

Hi, Commander Mordaunt here, better known as Agent Splash. I am talking to you as I need a bit of help to get me over the line and become your next PM.

So far I’ve kept my service record under wraps but it’s time that everyone knows what I’ve done for my country.

Syria, yes, I was there, Iraq I was there, Libya, been there too . . . and who do you think has been disrupting the Iranian nuclear programme? All hush-hush missions, you must understand. All I can say is that all involved parachutes, frog suits and explosives. Suffice to say the Middle East will never be the same again.

In the course of my duties I did have to wear stylish swimming costumes, consort with devilishly handsome men, play roulette and drink various cocktails. But those experiences were balanced by the multiple times I was seconds from a gruesome death at the hands of deranged psychopaths. One day the truth will be out there.

Talking of deranged psychopaths, you may have seen various photographs of me with a certain William Gates. I want you to bear in mind what I have just said. It is necessary for me to get close to the world’s most evil people to enable me to thwart their dastardly plans.

And, before you ask, that’s why I am a member of the World Economic Forum. I have Klaus Schwab in my sights and soon he too will feel the wrath of Agent Splash. At weekends I have been snorkelling in Lake Geneva, but I can say no more.

Putin also needs to watch his step. I have the password for the security gates at the Kremlin. I have worked with magicians, I’m a master of disguise and I know how to make people disappear . . . just saying!

As for my statements about Trans people, I was misquoted. I was talking about Pan’s People, who used to be on Top of the Pops. They are definitely women. Blame it on my Devon accent if you must. Perhaps ‘Mum’s the word’ on this one.

If there’s anything else you think can help my campaign, just meet me on the bench opposite the playground in St James’s Park at 14.23, precisely, tomorrow. I shall be wearing a pink beret and an Astrakhan coat whatever the weather. I will say, ‘It is chilly in Cleethorpes.’ You will reply ‘My marigolds have been eaten by slugs.’

I guarantee the world will be a much safer place with Commander Mordaunt at the helm.