The NHS – your overwhelming verdict

The NHS is seventy today. There is no need to spell out the abbreviation as the letters are imprinted on the nation’s heart from birth. And that is the problem – belief (or indoctrination) far more than its purported underfunding.

Standing second in the nation’s expenditure league after ‘social protection’, our not-so-glorious NHS gobbles up a cool £145billion a year (according to this listing) which is nearly four times as much as defence and nearly five times as much as public order.

Today, on the blessed birthday itself, we are pleased to announce that your judgment was conclusive – 96.58 per cent of your 465 votes were for a total rethink: 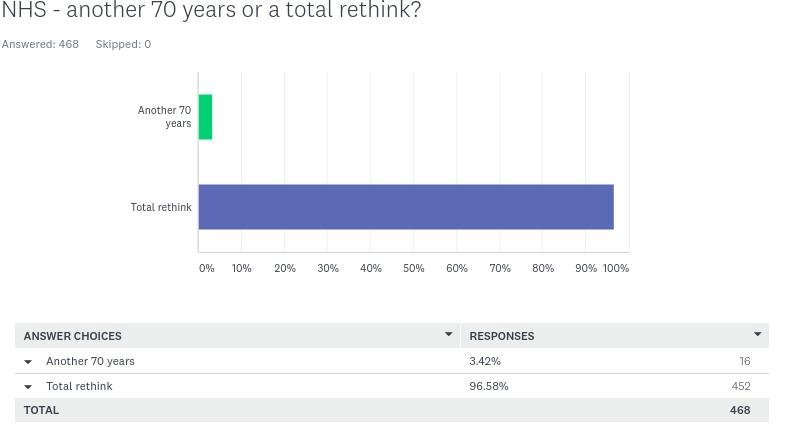 We believe that this is the voice of reason speaking but one that few apart from some think tanks dare even moot. Yet the scenario if the political class keeps its head on this is bleak indeed, as several of you pointed out. Andy Joyse nailed it when he wrote:

‘Until people realise that the taxes of their children, grandchildren and their, yet unborn, great grandchildren have been ‘borrowed’ to fund current healthcare, nothing will change . . . When the taxes for these unfunded liabilities fail to materialise (and they will), or the lenders call in the debts (very possible), the turmoil of the early 70s will seem positively harmless and benign.’

Story after story of gross inefficiency and waste followed in the comments stream. But how would you start all over again? With an insurance-based system and private provision? With a hypothecated tax? With total privatisation of hospitals and GP services?

As the BBC churns out its uncritical daily NHS propaganda output (Martha Kearney’s interview yesterday morning with the self-confessed drunk commissioned to paint the NHS masterpiece tribute is not to be missed) we invite our readers to step up to the plate with suggestions for the total rethink the nation’s healthcare requires.