The one black man it’s OK for whites to attack 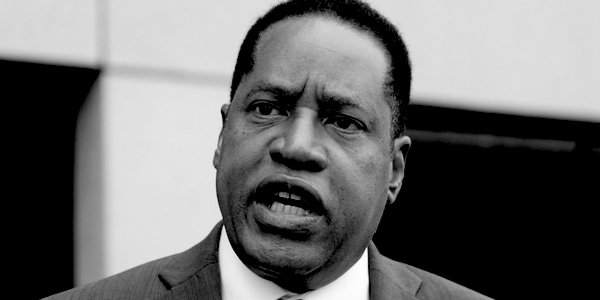 LAST week, a black man in California was attacked by a white woman wearing a gorilla mask who threw an egg at his head. This wasn’t some no-name citizen: this man was running to replace the current governor of the Golden State. One would think, with our ever-woke media, that a racist attack on Larry Elder might be cause for headline news. But this story has mysteriously slipped through the mainstream news outlets’ cracks.

Why? Because this black man is a conservative.

Elder, the straight speaking 69-year-old African American lawyer-turned-radio host and syndicated columnist, was campaigning in a recall election to replace Gavin Newsom for governor of California. The Sage from South Central, as he describes himself on his radio show, had three main points to his campaign: rising crime, rising homelessness, and a rise in cost of living. On Wednesday, sadly, he conceded defeat.

Sadly, for had Elder won the election, he would have been the first not only black, but also non-white, governor of the state of California. And a principled social conservative one too. It’s not difficult to imagine the Left-wing outrage and subsequent headlines that would have emanated from this attack had Elder been a Democrat: ‘Racism is Alive and Well in America’ and so on.

On the topic of crime, Elder is pro-police and against the Defund the Police movement. At a recent campaign event Elder said, ‘When you reduce the possibility of a bad guy getting caught, getting convicted, and getting incarcerated, guess what? Crime goes up.’ He dismisses the narrative that racism is to blame for all the murders of black people. At the same event, he cited this statistic: a young black man is eight times more likely to be killed by another young black man than by a young white man. Elder concluded, ‘Systemic racism is not the problem.’

For statements such as these, Elder (a black man!) has been labelled a white supremacist by the LA Times. The mental gymnastics must be exhausting.

Covid vaccination hesitancy is another big topic in this election. Elder has stated that he is in a high-risk category and has received the Covid vaccine. He encourages others to get vaccinated, too (although he is against mandates). One of the largest demographics in vaccine hesitancy is African Americans. Due to the deeply unethical Tuskegee Study of the 1930s, African Americans are distrustful of vaccines and of the American medical system. If the Left had any sense they would embrace Elder as a spokesman to help get more black people vaccinated. But anyone who has been paying attention knows full well that wokism isn’t really about helping people of colour, it’s about benefiting the elites in charge.

Elder’s father was originally from Tennessee. While working as a railway porter, he went on a run to California. He found the state sunny and the people friendly, but what struck him most about California was that he could walk into a restaurant and get served; where he was from in the south, an African American never knew where he would be able to get a meal. So he left racist Tennessee and moved to open-minded California where he and his wife raised their family.

Elder’s father died in 2011. Perhaps it is a good thing he didn’t live to see the day his son would be the victim of a racist physical attack in the state he loved so much, and subjected to ridiculous charges of racism by his beloved state’s number one daily newspaper.

To the extent that racism still exists in America, it’s the Left that is perpetuating it, not the Right.