The other, more civilised, Brexit debate

THE day before the catastrophic defeat of Mrs May’s Withdrawal Agreement, another Brexit debate in the Houses of Parliament took place almost unnoticed.

I am talking about Monday’s The Brexit Petitions Debate at Westminster Hall, in which the seven Brexit Petitions the public have signed were considered, as a group. In case you’ve already forgotten them they are listed below each with its link to the original petition and the government’s earlier response to it. 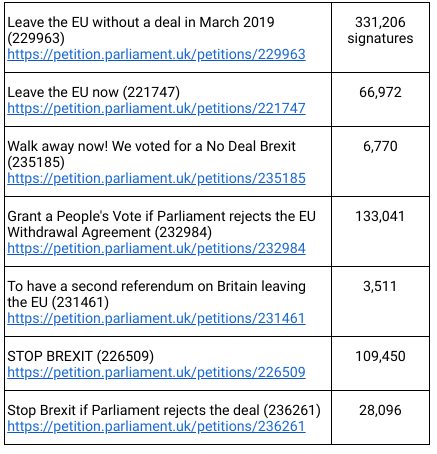 The motion was ‘That the House has considered e-petitions as listed’ and a debate ensued, attended by the Parliamentary Under-Secretary of State for Exiting the European Union, Kwasi Kwarteng. and for the Opposition, Paul Blomfield.

By contrast to some of the excitability witnessed in the House of Commons recently, its civil and respectful tone was striking. MPs calmly expressed considered views with outbreaks of common sense all too rarely reported by the mainstream media. No Speaker Bercow was present either.

It is fully recorded on video and in transcript.

More general agreement emerged from it than would the next day. Most were united in their belief that Project Fear was now counter-productive and dangerous,  Paul Blomfield (Sheffield Central) offering a dissenting voice on this, citing the CBI as a credible expert. There was no support at all expressed for stopping Brexit. Nobody suggested people did not know what they were voting for. And – Tory Remainers should note – there was little support for a second referendum for all the well-rehearsed reasons.

Within this two-and-a-half-hour debate, significant attention was given to what action should be taken after the likely defeat of the meaningful vote.

Paul Scully (Con, Sutton and Cheam) said we need to redouble our efforts and find a deal that works. He prioritised an orderly withdrawal respecting the wishes of the people, asserting his belief that a good future relationship can be negotiated starting from the WA.

Graham Stringer (Lab, Blackley and Broughton) argued that since the EU is a master of the last-minute deal we should renegotiate hard. Failing that the WA should be put to the people in a general election, his hope being that the Labour Party would then get a mandate to negotiate a better deal.

Andrea Jenkyns (Con, Morley and Outwood) argued forcefully for a WTO exit, saying: ‘We want to be a truly global, free-trading powerhouse. That can still be achieved, but only by trading under WTO rules.’

Alex Norris (Lab/Co-op, Nottingham North) insisted the Government must engage with the opposition.

Steve Double (Con, St Austell and Newquay) reminded us that the legal position is that, deal or no deal, we will leave the European Union on 29 March. ‘It is vital that the House delivers on that commitment. So the EU must come up with something fundamentally far better for our country, or we will have to leave with no deal.’

Ben Bradley (Con, Mansfield) argued forcefully to ‘give the European Union one last chance’, adding: ‘Increasingly my constituents are absolutely adamant that this place must support us leaving on 29 March, one way or the other.’

Tommy Sheppard (SNP, Edinburgh East) made no bones about his party’s opposition to Brexit, and warned: ‘If our voices continue to be ignored, then we have an alternative, and it will be activated once this Brexit dust settles.’

Paul Blomfield, winding up for the opposition, said: ‘Labour will not accept a blackmail Brexit’ and would seek to move a vote of no confidence. Labour would ‘waste no time’. If that fails, Labour would look at other options including a second referendum.

Winding up for the government, Kwasi Kwarteng said: ‘My understanding is that the Government will not seek to extend article 50.’ But in the light of various manoeuvrings and a potential motion of the House to overturn Standing Order No. 14, he opined that the House may ‘take a collective view’. In reaction to Dominic Grieve’s amendment he admitted to being surprised, saying: ‘Who knows what will happen?’ He warned Brexiteers against complacently thinking ‘all we have to do is sit and wait for no deal to take place . . . nobody knows.”

The most memorable moments of the debate were courtesy of:

Graham Stringer, who announced: ‘I would go to Mystic Meg for predictions about the economy before I would go to the Bank of England’; Alex Norris, who came out with: ‘I am a patriot’; Steve Double, who commented: ‘The Withdrawal Agreement works only if we have faith in two things: first, the goodwill of the EU towards us and, secondly, the negotiating ability of those negotiating on behalf of the UK. I am sad to say the experience of the last two years tells me I would be absolutely foolish to have confidence in those two things—[no reasonable person could].’

Paul Scully (winding up the debate): ‘The thing that has saddened me in this House over the past couple of years is its paucity of ambition for our country to take what will be good about Brexit.’

The chamber was reminded of some salient facts too:

That in December 2017 Parliament voted for ‘Leave without an agreement’– without any conditions in the Withdrawal Act. An amendment calling for a second referendum on the deal was supported by only 23 votes (Steve Double).

HMRC and DEFRA say that no additional border checks will be needed for a WTO exit and most physical checks are made away from the border, at source or at destination (Ben Bradley).

And finally – thanks to Steve Double – the huge disparity between the pro-Brexit and anti-Brexit petitions, that the biggest petition by far ‘is the one calling for us to leave without a deal’ (over 300,000 and over 500,000 being the sum of signatures on pro-Brexit petitions).

The Petitions Committee’s website publishes its debate schedule and membership. What the debates can and cannot achieve is also explained. This debate came too late to have any significant influence on government and as such was a polite acknowledgment of opinion but little more.