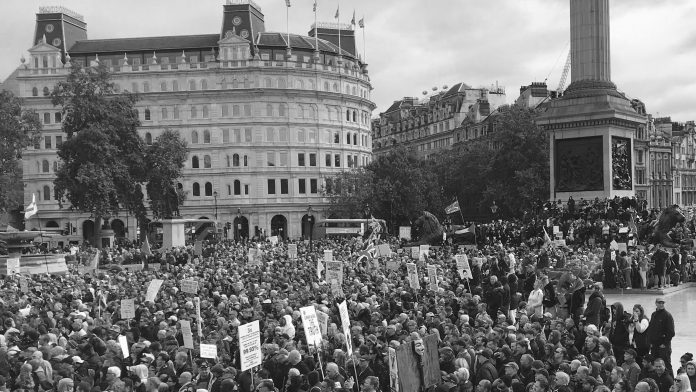 I AM not a natural protester or activist. I can count the number of marches and rallies I have participated in on the fingers of one hand: a big Countryside March and two Brexit rallies. Like most people of my generation, I have always thought I was lucky to be born in a free country that had fought hard to defend that freedom and where the law protected our liberty – and that we did not have that much to protest about.

No longer. Last week when the man we call Prime Minister, far from rowing back on his disastrous Covid policy, threatened further and indefinite constraints on our cherished freedoms, I realised we could be at a point of no return in the UK for democracy if we are not careful.

I decided I must be at yesterday’s anti-lockdown protest and rally in London; that the situation is too grave to ignore, too grave to stay silent.

As I approached Trafalgar Square from Whitehall, it seemed almost too quiet. I even wondered for a moment if the rally was happening. Then I knew it still was. For, arriving within the Square, I found thousands of people quietly and respectfully listening to a speech, as I then tweeted.

All ages were there, all races, classes, colours and creeds – and many, many young people.

‘Look at this’, I messaged a friend with this picture, ‘compared with the crazy disruptive XR that the police did nothing about for weeks.’

By contrast with the positive gaiety and smiling police faces I witnessed day after day trying to get through XR’s massive disruption of Trafalgar Square earlier this year, I felt a lowering police presence. I did notice and wonder about the armed police poised menacingly between the columns of the neo-classical National Gallery frontage looking down on the crowd.

Nor were they there, it later became obvious, to protect the speakers or the organisers.

I moved through the crowd chatting to different friendly people – who was speaking, who was next on? Everyone was straining to see and hear. But no one could have missed the event’s organisers’ repeated stress on the importance of the rally’s peaceful credentials. Though they really didn’t need to. The atmosphere was warm, wonderful and good-humoured. The placards said it all – with so few but such apposite words:

Democracy not Dictatorship; No Gestapo Policing; When Tyranny Becomes Law; Fear is Contagious so is Hope; In the Name of Public Health – Hitler Said the Same; Take the Masks Off – Smell the Bullshit; We do not Consent; We are the 99 Per Cent; We Are Being Gaslit; Matt Hancock can go Vaxx himself.

I felt proud to be British again. It felt the best of how British people are; in a great tradition of British questioning of authority.

Soon I was singing along to ‘We are the 99 per cent’ and more words I cannot repeat here – hard to hear anyway because there was so much laughter.

Then it got serious again with a rather long and worthy speech about the need for world or free trade (I couldn’t make it out) which decided me to do a final survey of the crowd before setting off home. More young people. All races. All good-humoured.

As I reached the south-west corner of the Square I saw police by their motorbikes were donning helmets.

Heading on towards Pall Mall, I saw that grim faced masked police in vans were beginning to pull out from a side street parking. In my innocence I thought this over-manned convoy was off back to base because with no trouble and relatively few people they were just not needed.

How mistaken I turned out to be. It was not till I got home that I found to my horror from the news that far from going back to base this must have been the start of their mobilising against the crowd. Which indeed they did. Officers determined to disperse the crowd, penned it in. Protesters and police were hurt.

Why this clearly premeditated action? Who authorised it and on what grounds? As Suzanne Evans asked:

Who authorised them to pen the crowd in? There was no need – there was no overspill into surrounding streets. And why did the police not regard this crowd with the same tolerance they did with the recent BLM protests?

It has shocked me to the core. And now I see that Sky News instead of focusing on unjustifiable and provocative police action has chosen to relay selective vox pops of ‘conspiracy theorists’. So predictable!

I could have told Sky News that you don’t have to be a conspiracy theorist to question the legitimacy or the rationality of the current Emergency powers – or to want to publicly protest against them.

Depressingly nearly all the papers today reporting the ‘clashes’ and the violence that occurred seem to have taken the pro-government line that the police enforcement of the government’s covid rules was justified, that they had a right to silence public dissent against them. They did not report that the police storming of the crowd after two and half hours of standing by was unprovoked or that there was every indication that their action was premeditated and planned. What I had witnessed was them moving into action when the rally was entirely peaceful and causing no disruption.

As a friend who was there to the bitter end reported back to me: ‘It was an amazing day but so tarnished by the police at the end. I feel deeply shocked by the way they stormed in. It was totally unnecessary and quite worrying in our democracy that this is how a peaceful demonstration is treated.  It’s made the whole situation all the more worrying, I feel. It did feel amazing however to be surrounded by people not willing to accept this so-called New Normal.’