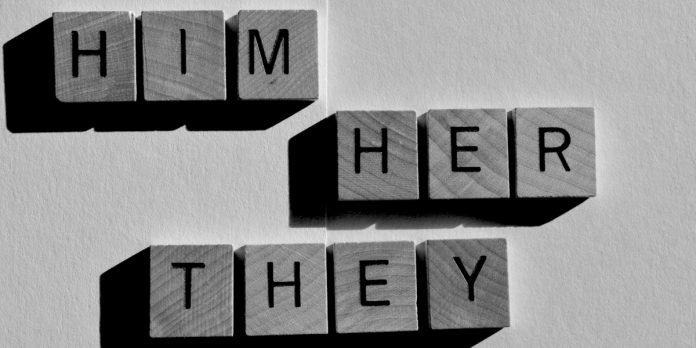 A RELATIVE was gratuitously ‘mispronouned’ the other day by Moonpig, the create-your-own-greetings-card company.

A few weeks earlier, I’d made a birthday card for him (let’s call him Bill) and the woke folk at Moonpig wanted my feedback. So they sent me an email asking: ‘Did Bill enjoy their birthday?’

It rather annoyed me, to put it mildly. I felt like writing back and saying: ‘Bill is a bloke and yes, HE bloody well did enjoy HIS birthday! And by the way, giving someone a gimcrack non-gender label is insulting.’

But things could have been even more complicated if Moonpig had delved into the current gobbledegook lexicon of the alphabet people, where we can find such exotic concepts as ‘neopronouns’ and ‘noun-self pronouns’.

What are neopronouns? On the US website mindbodygreen a chap (?) called Dainis Graveris explains that these are ‘a category of new pronouns that intentionally go beyond the traditional gender binary of masculine and feminine. While some people consider they/them/theirs pronouns as the go-to gender-neutral pronouns, they still limit individuals to three pronoun categories – he, she, or they. That’s where neopronouns come in.

‘Neopronouns empower folks who feel different from the rest of the world to be true to themselves when all other pronouns and labels don’t fit them. For some people, these pronouns recognise both their masculine and feminine sides. For others, they help them express their unique gender identity to others.’

Have you got all that? Unsurprisingly, there’s a baffling, tongue-twisting array of neopronoun-ese. Just to give one example, alternatives for the word ‘she’ include e, xe, ze, zie, zhe, sie, ce, ve, fae and bun.

And noun-self pronouns? ‘These contain pre-existing words that are used as pronouns,’ we are told. ‘They are a unique way of exploring one’s understanding of their own gender. For example, they can refer to fantasy/anime characters like fae/faer/faeself and vamp/vampself; animals like bee/beeself, kitty/kittyself, and bun/bunself; or other objects like star/starself and moon/moonself. Some people even use emoji-self pronouns.’

In other words, they’re perfect for people who think they’re vampires, cats, bees, rabbits or celestial bodies. You know, the sort of people the men in white coats used to look after.

There’s lots more in this vein on the website, but I don’t want to sap your will to live. I’ll only add this gem from a musician called Dua Saleh: ‘More recent neopronouns have context within online subgroups created by trans/queer youth, creating shifts in ways (people) subvert Western heteropatriarchy and binaries.’

Thanks for that, Dua – most enlightening.

As you may have guessed, I find it all quite depressing. Have these self-obsessed, navel-gazing snowflakes really got nothing better to do with their lives than sit around making up this rubbish and mangling the language?

Apparently some of them are part of TGNC – Transgender and Gender Non-conforming Communities. (That was a new set of initials to me and I got a shock when I looked it up, because I transposed a letter while typing and was directed to the website of the Thirsk and Northallerton Golf Club).

The trouble is that while pronounery is obviously dreamed up in the nutjob corner of Planet Woke, it could end up infiltrating mainstream life here in the real world.

And, of course, it’s tailor-made for the seek-a-grievance industry. Fall foul of the pronoun police and you might end up being cancelled and lose your livelihood, or your firm will be forking out a few thousand quid for discrimination.

Well, the fightback starts here. I’ve decided I will contact Moonpig after all. I’m going to write to the firm’s chief executive, Nickyl Raithatha, and tell him – sorry, them – to get his – sorry, their – act together.