The roadblock mob should get real about ‘crimes against humanity’ 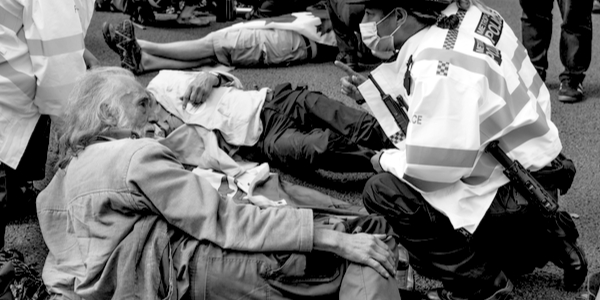 THE Insulate Britain sitdown shysters were at it again this week, defying injunctions and blocking rush-hour roads in West London and Dartford.

Why are they disrupting our lives by halting traffic? Well, a spokesman for Insulate Britain, which is the glue-wielding wing of Extinction Rebellion, said it wants ‘to stop our government committing crimes against humanity’.

Even amid the usual eco-hyperbole, that was quite an accusation. If they’re going to use such incendiary phrases, they should first ensure they know what they’re talking about.

The United Nations defines crimes against humanity as those committed as part of a widespread or systematic attack against a civilian population. These include murder, extermination, enslavement, deportation, imprisonment, torture, rape, sexual slavery, persecution and apartheid.

At the risk of sounding flippant, I doubt if failing to ensure that polyurethane foam is injected into a wall cavity, or heat-conserving material is installed in a loft, comes into such hideous categories.

If the Insulate Britain / Extinction Rebellion woke warriors are so worried, why don’t they stop blocking roads and start targeting authentic abuses that are going on right now? There are plenty of candidates.

For example, among actions that could well come to be seen as a crime against humanity is the over-the-top response to the Covid pandemic.

Mandatory vaccination programmes and bullying of children into being jabbed, along with the incipient medical apartheid and the scapegoating of the unvaccinated, could arguably be seen to come within the UN definitions.

In other areas, some would say that Britain is being complicit in crimes against humanity by doing business with China, which sells the organs of prisoners and oppresses minorities such as the Uyghurs.

However, to the snooty, self-centred zealots of Insulate Britain, ‘crimes against humanity’ is just another throwaway slogan sourced from Rent-a-Soundbite.

After all, it’s much easier to plonk yourself down on the public highway than to get off your a**e and challenge the real ills of the world.

It doesn’t help with the public perception of the road-blocking madness that the BBC website reporting the incidents on Tuesday included two video interviews with a couple of these maniacs on their way to a session of asphalt-squatting.

Instead of treating them like the anti-social nut jobs they are, the reporters pussy-footed around them. In one video, a protester in a dog collar was approached as if he was a soldier about to go over the top.

‘Are you a bit nervous this morning?’ the reporter asked. ‘I always am a bit nervous,’ came the stiff-upper-lipped reply. ‘I think it’s right to be nervous. But I’m pleased to be here – it’s important and that’s what matters, so I’m resolved to do it.’

That’s the spirit, sergeant! Stick that roll of loft insulation up ’em!

Another was asked if he was worried about the ‘disrespectful’ delays the protesters are causing. ‘It’s always a problem when you’re having small inconveniences for now, versus the existence of the planet,’ was his snotty, condescending, dismissive response.

However, he may have a point. I mean, who cares about emergency vehicles being delayed, people missing hospital appointments or flights, being late for work or school, or waiting in vain for vital deliveries as long as virtue signallers can show us poor, benighted plebs how to save the Earth?

Jeremy Kite, leader of Dartford Council, summed things up admirably when he said: ‘These are people who are just spoiled and entitled and they’re narcissistic in their aims, regardless of what they want to achieve, and what they want to do.

‘There are other, better ways to do it in a free society and you cannot deprive one person of freedom simply to establish yours.