The rocky road to Lake Ladoga 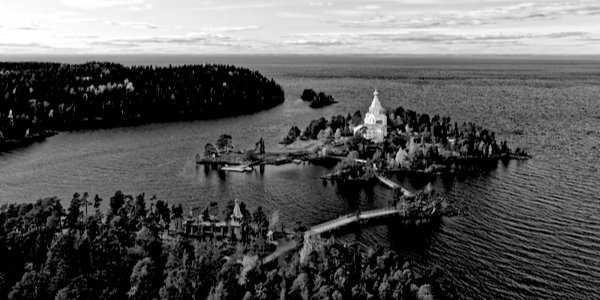 I SUDDENLY felt very underprepared. The VW Polo wasn’t made for this. With the hire car dancing around the pot hole-riddled trail in the depths of Lord-Knows-Where, Leningrad Oblast, I was increasingly concerned I might hear a fatal clunk.

The route wasn’t my choice. Google Maps had suggested it to avoid a traffic jam. Little did Google know, but it would be hard to get up to 60km/h on these side roads without causing cataclysmic damage to the car. Crawling along, we probably added about 20 minutes and not a little stress to the journey.

Still, adventure is preferable to stationary traffic. There was to be plenty of the latter to be had that day.

We had been planning the day trip for some time, though finding a car to hire proved more difficult than you’d think. Our plans were cancelled the week before as the hire company called to inform us that instead of the cheap rental we had asked for, they had a top-of-the-range BMW for £80 per day. ‘Nyet, spasibo,‘ I replied.

And this was after navigating other hiring hurdles. ‘We have three rules’, declared the hire company on the first call, ‘and rule number three is that the driver must be a Russian citizen.’

This is code for ‘we don’t want the driver to be from certain places‘. Knowing this, we asked if an Englishman would be allowed. ‘Oh, yes, no problem,’ came the response.

Although a few weeks behind schedule, we were at last exploring the Ingrian hinterlands of St Petersburg, passing through settlements with peculiarly non-Russian sounding names. Perhaps this shouldn’t be too surprising: this area was once known as Ingria and was inhabited by people speaking a Finnic language. My grandfather-in-law was Ingrian.

The Soviet Union did for the Ingrians though. Deemed an unreliable nationality, they suffered from the heavy hand of Soviet paranoia embodied in the repressive measures of Stalin and Yagoda. Many had gone over to Finland during the War, but Stalin made the return of all Soviet citizens in Finnish territory a requirement at the end of the Continuation War in 1944; upon returning many were sent further east to the Urals and Kazakhstan. Those remaining were soon crowded out by the immigration of Russians to the area.

It’s an area that has been fought over for centuries. Its key strategic position is reflected in the name of Shlisselburg, an island fortress at the head of the River Neva on Lake Ladoga. Shlisselburg is a transliteration of Schüsselburg, meaning ‘key fortress’, a name given to it by Peter the Great. This was to be our first stop.

Although various combinations of Slavs, Scandinavians and Finns spent centuries spilling blood trying to control the region, Shlisselburg’s military importance waned with the founding of Saint Petersburg at the other side of the Neva on the Baltic coast, and it became a prison. The first inmate was Peter the Great’s first wife, Eudoxia Lopukhina. Catherine I, Peter’s second wife, thought it would be a handy place to keep this potential rival when she became tsarina after Peter’s death in 1725. She was not to be the last famous inmate of the island gaol: Ivan VI was murdered there and Lenin’s brother, Aleksandr Ulyanov, was hanged there as a reward for his revolutionary endeavours.

The fall of tsarism did not signal an end to the bloodshed. In World War II Shlisselburg was besieged for 500 days by the German army. They obliterated the fortress through endless shelling, but the Russians held on to the island, preventing the full encirclement of Leningrad. This kept open the ‘road of life’ across frozen Lake Lagoda and allowed a trickle of supplies to reach the starving inhabitants of Peter’s then-renamed city.

Today on the island there is a cafe selling ice creams, and children running around with plastic swords and shields.

From Shlisselburg we drove towards Staraya Ladoga (‘Old Ladoga’). As we headed east, we passed a column of traffic stretching for at least five miles. People were now outside their cars – greenhouses on wheels in the summer sun – and meandered perilously close to the opposite lane. Knowing there was only one road back to Saint Petersburg, we knew we’d probably be sitting in the queue later that evening, so we decided to take our time.

Many centuries ago Staraya Ladoga was a large trading outpost. Not that you’d know now: apart from the recently refurbished fortress, there isn’t much in the town. In its prime, Staraya Ladoga was dominated by Vikings who had use of such an outpost. Following the river south, you can eventually find your way to Odessa, Kiev and – if you sail your longboat long enough – Constantinople.

A hill outside the town is the site of Viking burial mounds, one of them purportedly of the legendary Rurik, one of several claimants to the title ‘founder of Russia’ and founder of the eponymous Rurik dynasty, which ruled various Russian kingdoms until the sixteenth century. From the vantage point of the burial mound the river curves through the verdant landscape, the fortress visible in the distance.

Staraya Ladoga dwindled in importance as other fortresses were built, including Shlisselburg. The founding of Novaya Ladoga (‘New Ladoga’) closer to Lake Ladoga in 1704, by the ever-active Peter the Great, sealed its permanent downgrade to obscurity.

Some food – shashlik, of course – and we headed back. We passed a cemetery for those who died in the Great Patriotic War (as the Russians call World War II). A sign at the entrance reads ‘Nobody and nothing is forgotten’. Unlike such cemeteries I have come across elsewhere, its gate is locked.

The traffic jam had waited for us. We spent a few hours listening to Jeeves & Wooster while I explained Wodehouseisms to the missus. Eventually we passed the cause of the delay: not one crash, but two. A lorry lay on its side down a grass verge and two cars looked like crushed Coke cans. Another lorry carrying alcohol had spread its contents across the road; smashed bottles the least cause of concern amid such chaos.

Home, I had a beer and reflected on how much everything is in constant flux. Towns and fortresses rise and fall unpredictably, life itself is for ever in the balance. Dog tired, I hauled myself to bed.