The tale of a pilgrimage to Canterbury 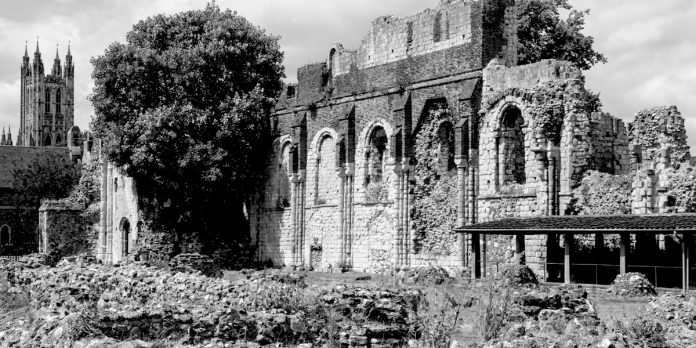 OF ALL the terrific ideas I have had perhaps this was the best: to take my wife and two young children on a pilgrimage over one of the hottest weekends of the year. Surprisingly, it went very well indeed.

Any parent knows what a Herculean feat it is simply to leave the house. Once you have got out, the icy hand of dread creeps over your heart as you consider the possibilities for imminent disaster – a forgotten sandal, the absence of a favourite toy. Things can fall apart so quickly over a lack of appropriate crisps. It is a question of prepare the best you can and trust your fate to the Lord. On this occasion He chose not to amuse Himself at my expense, which is an unusual departure from the norm.

We arrived at Rochester Cathedral in glorious sunshine. England looks otherworldly in the sun, as if it were some golden place we visited but never really knew. Today the town shone like a polished stone, the roads all a-shimmer and verges thick with the murmur of bees. Friends new and old chatted happily, thinking of the road ahead they would share.

The pilgrimage to Canterbury was to take place over three days, and was separated into two chapters. I was with the family chapter on a 22-mile route, the adults taking a more demanding 48-mile route. We picnicked on the grass before gathering for prayers. The priest looked splendid in his broad-brimmed hat, the excited whispers of expectant pilgrims falling silent before we sang the credo. Finally, we were off.

It is an unusual perspective that is granted from a long walk. When I was a boy I would hike with the Scouts, taking in the hills and fields, and sighting landmarks – a distant house, or a lone tree – as some measure of how far we had yet to go. So used are we all to passing through life at speed that the world seems little more than a backdrop, blurring into sameness as we drive from one point to another, with everything in the middle something to be got through, like an obstacle.

Walking makes a somewhere of all these in-betweens. I knew again what it was to be in a place, to sense something of its character, and what it would be like to call it home. These are the daydreams I had between our rosaries, sung in Latin and in English, as I took in the pretty houses and the grand sweep of the golden barley in those heat-soaked, radiant fields.

Following the Pilgrim’s Way is to trace the footsteps of Chaucer and the pilgrims he immortalised. Many know the tales he told of the pilgrims on the way to venerate St Thomas à Becket. This ‘troublesome priest’ refused to be taken from Canterbury cathedral, and so the knights of King Henry II killed him with a sword blow to the skull as he clutched a stone pillar. The wicked Mauclerk (‘evil clerk’) who accompanied the knights is said to have put his foot on St Thomas’s neck, ‘and, horrible to say, scattered the brains with the blood over the pavement. “Let us go, knights,” he called out to the others, “this fellow will not get up again”.’

Miracles followed the martyrdom of Becket, whose canonisation followed swiftly upon his death. Canterbury became one of the most important sites in Europe for pilgrimages, beginning at Winchester and ending at the site of that murder in the cathedral.

T S Eliot’s play of the same name is full of gems. ‘Friendship should be more than biting Time can sever’, he says, and along the sweltering road, ripe with the odour of melting tarmac, friendship blossoms in the dust. To have the time to speak, and with nothing to take you away, is truly to meet. These people I had not known before I am sure I will know for ever now, and in a way that is uncommon because uninterrupted by beeps and pings and screens. Seldom did I see a phone produced, even among the young, and then only to capture the moment in a photo. Tired but happy faces looked up from the shade-dappled water stops, from the picnic lunches in the lovely parks, seldom happier than when I produced my cornucopia of blister plasters. One can never carry too many, I found.

In the evenings we would make our camp and gather round the tables in the field to eat the food prepared for us. Time slowed to the tempo of the human voice: the children playing, their shouts and songs mingling with the chatter over wine as the sun sank beside us. The simple majesty of a shower after a day on the hoof, and the glorious luxury of a chair – oh! – the sheer pleasure of it unstrung me. Moments without shoes became precious as rubies.

We had mass in a marquee and in a quiet village hall. All those who joined us at Canterbury knelt to pray at the ruins, so heavy with British Christian history, of the Abbey of Saint Augustine. What a thing it is to sing to the glory of God in the sun, at the place where the faith was reborn in England some sixteen hundred years ago. To sing with our ancestors, to hold, for a moment, the hand of our past.

The pilgrimage was a fine time, and made time a fine thing too. Our present slowed to the point of meaning, a perspective on the past that is invisible from a speeding car. We are all going somewhere. Where will you be next July?