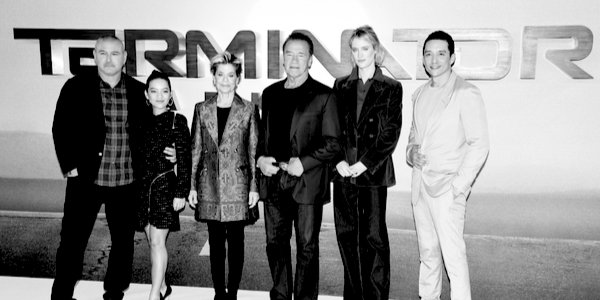 IF they can kill off John Connor (the hero of Terminator 2: Judgment Day) in such a flippant, disrespectful way, then nothing is sacred and nothing is safe. This is my reaction to the garbage film Terminator: Dark Fate.

This film is not only garbage in that the acting is poor, the storyline is poor and it overruns. It is garbage in how it treats two of the best sci-fi films of all time, namely The Terminator and Terminator 2: Judgment day.

Warning: spoilers and assumption of much Terminator knowledge needed for this blog. The director’s explanation is here on one of the many spoilers below.

I should have walked out of the cinema in the first five minutes when out of nowhere a Terminator kills John while he is on some beach somewhere with this mother.

This, dear reader, means that all the work and sacrifice carried out in T1 and T2 was for nothing. The destruction of Skynet, breaking Sarah out of the psychiatric ward, the car chases, was for nothing. To add insult to injury, it is a T850 that kills John and not even the superior T1000 we saw in T2. That model couldn’t manage to kill John with the aid of a helicopter and knife-like arms, etc. But this time it was just the old-fashioned T850, which should not even exist because Sarah and John changed the future in T2 anyway.

The Terminator just rocks up out of nowhere and shoots John with a handgun – that’s all it took. The final insult is that all of this is done under the nose of his protective, ultra-maternal warrior mother Sarah Connor. She is literally right beside him, not in a psychiatric unit, not even in the toilet, she of ‘I need to see my son, he is naked without me’ cannot save John, the leader of the Resistance and saviour of mankind.

And John is killed, dear reader, because John is a white male. And even though he is a teenage white male, he still must be brutally gunned down under the eyes of his iconic mother. Even Saint John the Apostle died of natural causes. Not so John Connor. It was a dagger to my heart.

And who, dear reader, do you think is to replace John in 2019, the Year of Wokeness? Why, of course, a Mexican (illegal) immigrant teenage girl, Daniella ‘Dani’ Ramos, who is about 5ft 1in and we are to believe will lead the Resistance against the machines in the future.

The big reveal was not, as Sarah Connor assumed, that Dani is the future mother of ‘some man’ who would lead the Resistance, but that she is to become the Great and Worthy Leader herself. It would be one thing if she is convincing in this role, but she isn’t. This is just garbage piled upon the insult of killing off John Connor.

Sarah Connor herself is no longer the warrior mother dedicated to her role as protector of the saviour and leader of mankind. She’s a bitter, twisted and cynical old woman who can carry a gun, but seems to take a dim view of the Resistance sending a protector back in time to guard a mother of the head of the Resistance, referring to the new female protectee as a mere womb. We are supposed to ignore the fact that, by extension, she is mocking her own son – who sent back Kyle Reese to protect her, before John was born. This is the anti-maternal garbage piled upon the insult of killing John Connor.

Then there is a new protector, Grace, sent back in time to save Dani. She is a woman (of course she is) who robs a man’s clothes at the beginning of the movie (of course she does). But listen closely to the following, because this is the final straw.

This protector, Grace, despite being human (although enhanced) shows less regard for human life than Arnie the T850 does in T2. In T2, the young John spent time telling Arnie T850 that he cannot ‘just go around killing people.’ Why not, Arnie the machine asks. Well, because you just can’t.

John Connor, although he cannot articulate it, knows the value of human life and that it is sacred. So, even though this puts them as a disadvantage in escaping from the T1000 and then destroying Skynet in T2 (Arnie checks after one particular shoot-out and explosion that the police officers have not been killed), John orders Arnie not to needlessly kill humans.

Not so for our new-fandangled female human protector in Terminator: Dark Fate. No, sir. Grace just goes around needlessly killing people (mostly American law enforcement agents) and even kills, or tries to kill, the medical team that saves her. This is anti-life garbage, piled upon the anti-maternal garbage pilled upon the insult of killing John.

The problem with this film, dear reader, is that it reflects the culture we live in. In 1983 in The Terminator, a white, human male, Kyle Reese, was sent back in time to save Sarah Connor and her yet-to-be-conceived child. He was the protector saving a future mother and child.

This movie was also a love story, for John was conceived through the union of Sarah and Kyle, and Kyle admits to Sarah that he ‘travelled across time for you, Sarah. I love you, I’ve always loved you’. He loved her for what and who she was: Sarah Connor, mother and protector of the leader of the Resistance and saviour of mankind.

It is similar theme in Terminator 2, where warrior but still very maternal Sarah has evolved and helps the protector Terminator, Arnie, to save her young son John. Sarah even admonishes John at one stage for jeopardising his life to save her. Although they had been separated for some time, the bond between them was sacred.

Enter 2019. All the male characters in this film, from John Connor and the father and brother of the new female leader, Dani, are dead within ten minutes. How the men in the audience can just sit there and watch this, when the message seems to be ‘kill all the men’, I don’t know. But that might be worth a blog on its own.

And this time a female, anti-life human, Grace, is sent back in time to protect another woman who is not a mother, nor has any romantic relationship of any kind, but just does her ass-kicking thing.

Terminator: Dark Fate is the reason I don’t watch movies made after 2000. It’s not storytelling any more, it’s just making political points. It’s a dystopia all of its own, but the feminists and not Skynet are the overlords. If this is the matriarchy we have to live in, I’d rather take my chances with the machines.