Some colours are more equal than others 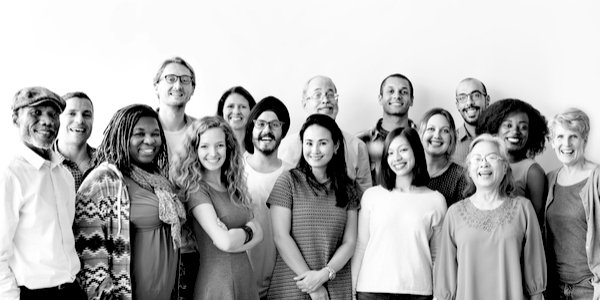 IN Specsavers there was nothing to read except stuff about glasses, so I glanced over the walls with their brightly coloured posters. Perhaps my eyes needed testing but there seemed to be only young black faces up there and older couples: one white, the other black or Asian. Black and brown faces outnumbered white by six to three, a strange ratio in a country where the ethnic population at the last census was only 13 per cent. All the couples looked blissful, but only seven per cent of Britons are in interracial love-nests, nearly half of those with an ‘other white’.

Advertising chooses to reflect a reality which most of us don’t see. Thirty-seven per cent of commercials now stick in a black face for the sake of diversity. Ethnic minorities must be seen in every TV adverts and drama, no matter how incongruous. They must also appear in disproportionate number in every walk of life. Even the Museums Association, a membership organisation for museum, gallery and ‘heritage’ professionals, is currently offering 100 free places to its events for members who ‘face barriers due to ethnicity, disability, socio-economic background, gender identity or LGBTQ’.

‘We are passionate about delivering diversity and equality and recognise there is still more work to do in challenging barriers to entering and progressing in the museum sector,’ explains Yosola Olorunshola on their website.

This skewed diversity imperative has entered all our institutions, even to the awarding of literary and art prizes. The origin of this topsy-turvy fantasy world has just been exposed in all its sham. Maths professor Sir Bryan Thwaites, 96, planned to bequeath £400,000 to Dulwich College and £800,000 to Winchester College, schools where he was a scholarship boy, to assist white boys from poor homes. Only a third of such pupils pass maths and English GCSE, below all other ethnic groups. He got short shrift.

Both schools replied that to accept his money would contravene the 2010 Equality Act, originally drafted by Harriet Harman. Dulwich retorted that merit should be the only consideration for scholarships. Yet none of that applied to rap star Stormzy last August when he funded scholarships at Cambridge University for black British students.

Trevor Phillips, former chairman of the Equalities Commission, took Sir Bryan’s side, but expressed this support in terms which no white man could use about another race.

‘I doubt that I’ll ever work out,’ he said, ‘why the British appear untroubled that so many of their children emerge from over a decade of expensive, compulsory education with scarcely more in the way of literacy and numeracy than the average Neanderthal.’

The British, by which I think he meant white, are not ‘untroubled’ by their ‘Neanderthals’. The middle classes often move house to get their children into schools well away from ethnic minorities and poor white kids, but they would rather die than admit their motive. This leaves a white underclass struggling in sink schools where they are often in the minority, and seeing they have no choice or aspiration, just accept their lot.

Phillips gave us a wonderful truth about white ‘Neanderthals’ but no one, even in news reports, ever mentions the ethnic identity of black boys, even though extraordinary numbers of them have given up mugging white people in favour of stabbing each other to death on our streets. The very language used by black and white is different; careless use of the term ‘coloured’ rather than ‘of colour’ can wreck a flourishing white career, yet the racist term ‘gammon’ for white men is hurled about freely by proud ‘anti-racists’.

As a black man, Trevor Phillips OBE, unlike Sir Bryan, is not up against the 2010 Equality Act. He is just fair-minded enough to despise what he has called the ‘Be Kind to Blacks Act’, but it doesn’t hurt him in the way it does his white fellow citizens.

Developed in 2005 by Labour’s ‘Government Equalities Office’ following an ‘equal treatment directive’ from the EU, the Act was known as ‘Harman’s Law,’ and turned a raft of social and race legislation into a catch-all ‘equalities’ law. In one crass stroke, it privileged black, Asian and other minority groups over the white majority.

As ‘Harman’s Law’ went through, agreed by the new Coalition Government, Polly Toynbee called it ‘Labour’s ‘biggest idea . . . a public-sector duty to tackle the class divide in a way that no other policy has. This new duty to narrow the gap would permeate every aspect of government policy. Its possible ramifications are mind-bogglingly immense’. It was also called ‘Socialism in one clause’.

The effect has been mind-bogglingly destructive, permeating all aspects of society. For the first time it listed ‘privileged characteristics’: age, disability, gender reassignment, pregnancy, race, religion, sex and sexual orientation. That quickly came to mean black or Asian not white, and religion meant Islam. This drastic social engineering festers at the heart of identity politics, the most divisive rather than inclusive poison running through our society.

Rather than harmony, Harman created such a distortion that many suspect diversity isn’t just about black faces being made more visible but white faces disappearing. Not so much all must have prizes, but that whites must be seen to fail.

Underlying this identitarian quagmire is the failure of state education which has not just destroyed the lives of white working-class boys, but halted the social mobility we should all have enjoyed and dissolved any possibility of ‘meritocracy’ which the great and the good at Dulwich cosily pretend exists. Surely it has also reduced our national ability to think and talk with reason and clarity.

It’s three weeks since the last election, but this dispute between an old man trying to help the most disadvantaged children in Britain pitted against others keen to manipulate the idea of ‘protected status’ exposes the fantasy world of socialism, where minorities in the UK triumph over their hated colonial oppressors with the cudgel of crude legislation.

In shops, watching TV, visiting the theatre or art gallery and listening to TV or radio news, it often seems that hypocrisy and complacency has let the socialists win after all.

This article first appeared in salisburyreview.com on January 1, 2020