The Treaty of Versailles – intermission between old and new world orders 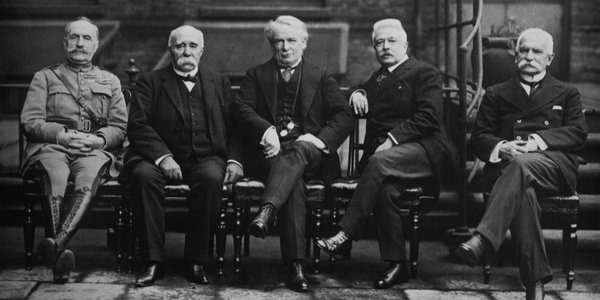 THIS week marks the centenary of the actual end of the Great War. Wars are ended not by armistices or surrenders, but by treaties.

The passing of the centenary of the Treaty of Versailles seems to be a muted affair, compared with the fanfare of the centenary of the start of the Great War. The treaty itself was signed precisely five years after the assassination of Archduke Ferdinand in Sarajevo. This precision was also marked in World War II, where the signing of the Japanese surrender in Tokyo Harbour aboard the USS Missouri took place exactly six years after Britain declared war on Nazi Germany.

The terms of the treaty were determined at the Paris Peace conference, which excluded Germany. The Germans were merely shown the treaty and induced to sign. The most controversial clause from the German perspective was over ‘War Guilt’ where Germany was held responsible. This has been a matter of debate since 1914. But the initial Austro-Serbian war became a general war between the powers only when Germany’s response to Russian mobilisation in the East was to invade Belgium in the West. At the time, Germany argued that Belgium had violated its own neutrality by refusing passage to German troops to invade France. The Chancellor, Bethmann-Hollweg, stated ‘necessity knows no law’ as a justification for this violation.

The only international agreement Britain had was to guard France’s channel coast, allowing the French to concentrate their fleet in the Mediterranean against potential threats from Italy and Austria-Hungary. If Germany had marched through just a corner of Belgium as a way to outflank French defences then it is possible that Britain would have stayed out, especially if Germany refrained from any hostile naval action against France. Instead Germany piled the bulk of their army through the entirety of Belgium.

Parliament and the cabinet had been previously divided over participation in the war. Despite the Entente, Britain desired to remain in ‘splendid isolation’ from continental affairs. The tipping point was the invasion of Belgium. The neutrality of the Low Countries, preventing them being a springboard for an invasion of East Anglia, was a vital British interest. In the Franco-Prussian War, Britain had secured undertakings from both belligerents that they would continue to respect the 1839 Treaty of London and guarantee Belgian neutrality. In 1914, only France agreed to this. Germany regarded that treaty as a ‘scrap of paper’.

The Treaty of Versailles became a scrap of paper during the following two decades. Foch had been prescient in denouncing the treaty as postponing war for twenty years, or until a whole new generation of young men could grow to resume the fight. All the victors were too weakened by war to impose its conditions. This can be seen by comparing post-Versailles diplomacy to that of the aftermath of the Treaty of Frankfurt.

The Treaty of Frankfurt contained the punitive measures applied by Imperial Germany against France after the latter’s crushing defeat in the Franco-Prussian War. The new German Empire had been announced in the Hall of Mirrors in German-occupied Versailles in 1871. The date the Treaty of Versailles was signed was not its only symmetry. The Frankfurt treaty required France to pay a fine for starting the war and also to lose valuable territory bordering Germany. The onerous nature of the terms triggered revanchism in France, where the stain of defeat could never be washed away. And yet these two powers did not clash again for over forty years. The difference was that Germany’s military power on land dominated the continent, but did not challenge the overall balance of power that would have required British intervention to restore it. In Otto von Bismarck, Germany had a skilled diplomatist, who was able to forge a network of alliances that isolated France. He skilfully managed to craft treaties that allowed Germany in effect to arbitrate any dispute between the empires of Austria and Russia. When Russia defeated Turkey and imposed the Treaty of San Stefano on it, there was a conference in Berlin attended by all the powers in Europe to revise it. The diplomacy of Bismarck helped keep the general peace in Europe for nearly half a century. It was Bismarck’s dismissal in 1890 by the rash and possible mentally-afflicted Kaiser Wilhelm II that started the decline into general war. Bismarck, on his departure, prophesied Germany’s collapse twenty years later in a manner similar to Foch in 1919.

And that was the problem post-Versailles. There was no politician capable of assuming the mantle of Bismarck. The war had been too destructive, not just of material, but of morale. Previous values, however strongly-held, were open to question, and that included the provisions of the treaty and their enforcement. The world struggled to come to terms with the huge loss incurred by the prolonged fighting that neither side could halt until facing the prospect of annihilation. At a time when strong men were needed, none was available, so little by little, the noble values of 1919 were frittered away in a death of a thousand treaty breaches. It was into this vacuum that a failed artist whose war record showed no advancement above corporal stepped. However, he was not the saviour the continent needed. Instead he used the culture of violence acquired in combat to make war upon civilian politicians and the populace of not only his, but other countries. It was this Bohemian corporal who proved the Field Marshal right.

June 28 2019 is not just the centenary of the signing of the Treaty of Versailles. It also marks 80 years since its unravelling, when the British government finally decided that further aggression would result in a declaration of war. The Old World came to an end in Sarajevo in 1914, and the New World came into existence in Tokyo Bay in 1945. The Treaty of Versailles just marked an intermission between the two.