The Truckers, the model of peaceful protest 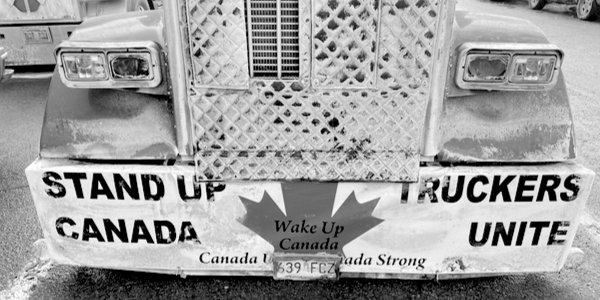 NINE weeks after the iconic Canadian truckers’ protest was abruptly terminated, freedom fighters returned to the capital, Ottawa. On Saturday, the ‘Rolling Thunder’ motorbike rally was prohibited from the city centre, but thousands of citizens gathered outside parliament. Spirits were high: these people had resisted the severe Covid-19 regime, which was one of the strictest in the world. Now Canada is opening up again, but the country remains in a state of tension and trepidation.

Earlier this year I spent almost a month in Ottawa. Well, virtually. I sat glued to my computer screen night after night, watching one of the most awesome rebellions against tyrannical government in modern history. For this I am grateful to the likes of Ottawalks, a YouTube channel run by a guy who normally wanders around filming mundane urban life, perhaps to an audience of a few dozen. Suddenly local live-streamers had up to twenty thousand live viewers, covering a major event that the mainstream media first tried to ignore, then claimed was too dangerous for their journalists.

The prologue was a two-week convoy crossing the vast frozen land, through British Columbia, Alberta, Saskatchewan, Manitoba and Ontario, cheered on by ever-larger roadside crowds. Justin Trudeau, who had incurred the wrath of long-distance lorry drivers for imposing a needless and cruel vaccine mandate, knew they were coming. The police were preparing roadblocks and punitive sanctions for the 18-wheeled insurrectionists, but the truckers tricked them. The convoy was due to arrive in Ottawa on a Saturday, but several big rigs arrived a day earlier. They positioned for maximum impact, right outside Parliament on Wellington Street. A tall crane parked outside the gate, with Canadian flag hoisted. Monster trucks pulled up in rows of three either side of the crane, leaving an assembly space between.

The truckers insisted that they would stay until all Covid mandates were revoked. They were in for a long and cold struggle. The temperature was minus 30C degrees at night, rising to about minus ten in the daytime. A routine set in: the drivers would batten down the hatches in their Kenwood en suite cabs and wait till daylight to stretch their legs, making use of the various food and coffee stalls staffed and resourced by volunteers. At midday there were speeches from the stage, with live musicians and DJ. Festivities continued until the evening frost took hold.

A poignant feature of the truckers’ protest was the cacophony of horns. On dark evenings it was haunting, like a call to a higher authority. Could these be the latter-day trumpets of Jericho, to bring the corrupt houses of Parliament crashing down? The drivers learned to sequence their various sounds, an aural feat that perhaps a composer could try to recreate as a commemorative symphony. As the decibel level rose, eventually the city chambers got a legal injunction against horn-blowing, and an eerie silence descended on the icy streets.

There was a remarkable absence of antipathy or aggression, despite relentless provocation. Trudeau called the truckers a ‘fringe minority’ of Nazis and misogynists, while the bought mainstream media told lie after lie to demonise the movement. In fact it was a model of peaceful protest. The atmosphere was always happy, with street hockey, a bouncy castle for kids, and sing-alongs to anything from John Farnham’s You’re the Voice to the national anthem.

On the second weekend, thousands came to hear speeches by lawyers, doctors and celebrities. Most inspirational was Chris Sky, who brilliantly conveyed the significance of the scene. Canada, he declared, had become a beacon of freedom for the whole world (at this time throughout Europe the unvaccinated were barred from shops and services). He asked: ‘Who would think that the docile, the friendly, the nice Canadians would be the first to dig their feet into the sand and say: enough is enough?’

We knew that it couldn’t go on for ever. City police had been unwilling to intervene, masked patrols going through the motions, doing no more than issuing parking fines. But the establishment was rattled, and clearly the protesters would be made to pay for their highly-publicised impudence. A crowd-funding collection of nine million dollars on GoFundMe was seized by the government. Some donors had their bank accounts frozen on the ludicrous grounds that they were funding terrorism.

What would Trudeau try next? He went as far as invoking the National Emergency Act, which gave him unbridled powers to treat the truckers and their supporters as enemies of the state. On the twenty-second day a force of armed soldiers and riot police launched an assault. Cab windows were smashed and occupants arrested. Hundreds of people trying to defend the protest zone were beaten with batons and tear gas. Organisers including Tamara Lich were incarcerated. The streets were cleared at last.

Fast forward to last weekend, and although the dark clouds of Covid-19 persist, the sun has broken through. In a large pen set aside for counter-protesters outside parliament, less than a dozen appeared, bearing placards against the ‘fascists’ who want freedom (or ‘free dumb’ as they deride it). The Covid puritans are reducing in number, but not in vitriol. As the flag-waving thousands marched through the city, eggs were hurled from apartment blocks. To the professional urbanites, the protesters are an embarrassment of unruly peasants. On the terrace of a trendy bar some customers donned masks and gesticulated at them, but a patriotic female rally-goer asked them: ‘Who’s the fringe minority now?’