The wheels are falling off Macron’s federalist bandwagon 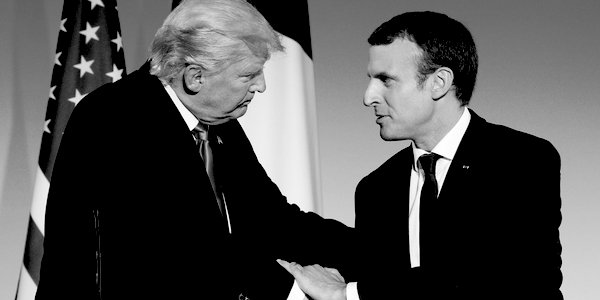 Emmanuel Macron’s recent visit to America revealed the media at its infantile worst. We were treated to a frenzy over the Trump-Macron bromance with ‘body language experts’ falling over themselves to analyse every handshake and speck of dandruff. What did Trump mean by a ‘very special relationship’? How long did they hold hands? What about Melania’s hat? In the days of the USSR, Kremlin-watchers never had so much fun.

A visit earlier in April when Macron went to Strasbourg did not receive a fraction of the media coverage of his American trip, despite being more significant. There the President of France addressed the European Parliament in a speech which was part of a charm offensive ahead of the EU elections in May 2019, the first after our exit.

The speech enthusiastically advocated sweeping reform of the EU leading closer to a federalist state. Macron’s proposed reforms amply demonstrate that he is an enthusiastic supporter of ever greater EU integration. Included in his speech were calls for deeper monetary and fiscal reforms, a carbon tax and a levy on the digital economy, all to raise revenue following Brexit. In Macron’s view, now that Britain is out of the way Europe, under French leadership, can progress towards superstate status.

If there were any MEPs who disagreed with his proposals to levy even more EU taxes, Macron had a typically straightforward Europhile message: ‘If you don’t like the European Parliament, you should have run in other elections!’ The speech was warmly welcomed by European Commission President Jean-Claude Juncker, who told European lawmakers afterwards: ‘The true France is back.’

Annoyingly for federalists, the true Hungary and Poland are also back. They are not alone: throughout Europe, in the west as well as the east, people are expressing ever greater disillusionment with the EU’s federalist thrust.

The movement in Europe is gradually away from the monolithic EU proposed by Macron, Juncker and Guy Verhofstadt. This can be seen in the frustrations of fanatical federalists as they press for immediate centralising reforms to save the EU project and are increasingly finding their ambitions blocked.

One of Macron’s key proposals to further European ‘democracy’ was transnational lists. In September 2017 he proposed that some of the 73 seats freed by Britain’s departure should go to Europe-wide constituencies instead of national ones. This proposal was rejected by the European Parliament in February 2018 after the centre-Right European People’s Party (EPP) said there was no legal basis for what was labelled ‘another elite-driven project’ by one MEP.

One of the arguments Remainers used against Brexit was that it would weaken any moves towards genuine reform of the EU leading to greater democracy. Brexit has done the opposite: it has enlivened those opposed to increasing federalism.

The EU’s move towards increased centralisation is being increasingly questioned by smaller countries. Unable to hide behind the UK’s skirts any longer, they are beginning to find their own voices. Scepticism if not outright rejection of ideas such as a European Monetary Fund, a single European finance minister and increased contributions to the EU budget are being expressed more strongly.

Dutch Prime Minister Mark Rutte has found his voice at last in a direct challenge to Macron, saying that increased integration is ‘not the answer’. Recently Holland joined Denmark, Estonia, Finland, Ireland, Latvia, Lithuania and Sweden in publishing a letter calling for moderation in the current debate and rejecting most of Macron’s federalising proposals.

It is not only in northern Europe that resistance to greater integration is growing. Central and Eastern European countries are expressing disquiet.

Chancellor Sebastian Kurz of Austria has been critical of closer economic integration and is arguing for more power to be given back to the member states. ‘It is right for the EU to scale back when it comes to questions that member states or regions can decide for themselves, and to make sure that regulations don’t increase steadily,’ Kurz said recently.

The expectation that both Hungary’s Fidesz and Poland’s Law and Justice Party will do well in next year’s European elections and the disquiet over immigration in the Visegrad countries points towards greater restraint on federalist ambitions. No longer do Paris, Berlin and Brussels constitute a legislative steamroller. Budapest, Warsaw and Bratislava are increasingly demanding to be heard.

Importantly Germany, the biggest player in the EU, is being cautious about increased integration. Macron’s reform initiative was held back until Germany could form a government following last September’s election. But despite the Grand Coalition functioning since February, no new proposals have issued from Berlin. Angela Merkel has returned to her cautious policy of holding fire until she is certain which way the political wind is blowing.

Instead of agreeing with Macron’s proposals for deeper economic integration, Merkel has put forward the weaker alternative of ‘jumbo councils’ where the finance and economic ministers of Europe meet. Olaf Scholz, German finance minister, has sunk Macron’s European deposit insurance scheme for the present. Merkel’s own CDU has issued a paper arguing that implementation of a European Monetary Fund would require a new EU treaty. In the current state of play this lengthy process involving national parliaments would be politically unworkable.

Macron’s relentless pursuit of a federal Europe is further away than ever. We are not seeing the disintegration of the EU, but we are seeing significant roadblocks being placed in front of the federalist juggernaut.